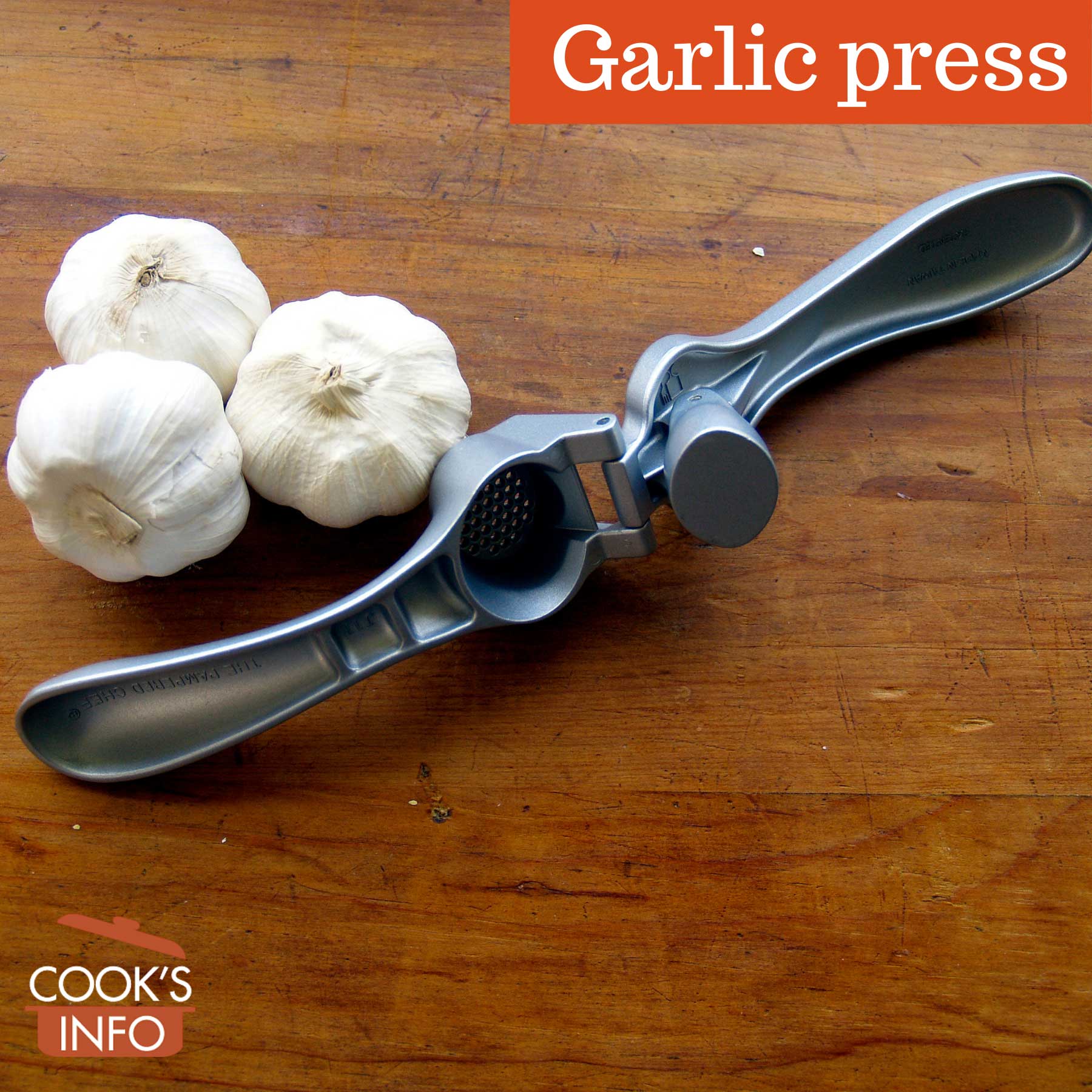 A garlic press is used to crush garlic. Note that you will get crushed garlic, not minced. The garlic comes out more like a paste, which can be ideal for garlic butter and salad dressings.

The presses can be made of stainless steel, aluminum, or plastic. Most are aluminum, and not dishwasher safe. A few novelty models are made of wood, with the crushing bowl in metal.

Most garlic presses are two pieces: a handle with a basket-type bowl with holes in it, and a handle with a corresponding plunger that forces the garlic clove through the holes. The longer the handles, the move leverage you will have. Some have bowls large enough to hold several cloves at once. Some models have interchangeable bowls, with different sized holes in them. Some of the better models may be three pieces, with two of the pieces being handles, and the third piece being an articulated plunger that goes into the bowl to do the crushing.

Some models purport to be powerful enough that you don’t have to peel the clove first.

Some models try to help you with the clean-up. Some have a cleaning pick which is separate. In response perhaps to observations by some wags that the cleaning pick is yet another thing to have to fish for in a crowded gadget drawer, some models now have a storage compartment for the picks in one of the arms of the press. With some other models, when you need to clean it, you swing the handle fully back in the other direction, then the teeth push whatever got stuck coming through the tubes back into the bowl, to be scraped or rinsed out.

Garlic presses don’t always work perfectly. A lot of your clove can get stuck in the bowl. Some models can suffer from “squirt back”, where the squished garlic rides up inside the bowl instead of out of the holes.

Many people have few kind words to say for garlic presses. They say that the first clove of garlic usually goes through okay; it’s the ones afterward where the problems start. Often you have to clean them between each garlic clove you press, increasing the time spent on the overall operation. And they don’t like what it does to the garlic, producing the garlic moosh. Consequently, they prefer just to use the side of a chef’s knife to give the clove one smoosh, then peel it, then mince it properly. Finally, they point out, the clean-up at the end of a garlic press can take two or three times longer than it would had a chef’s knife been used instead.

But those who like garlic presses, say they are faster and more convenient. And point out that those doing it with a chef’s knife are neglecting to mention the clean-up of the chopping board.

And just as many are to polite to express feelings one or another, but can’t remember when they last bothered to look for theirs somewhere at the back of a drawer.

The tool can also be used to make onion or fresh ginger juice. [1]You won’t get anything more than ginger juice, though. Ginger is too fibrous to actually go through.

Even if you don’t have time to give it a thorough cleaning right after use, the important thing is to reduce your clean-up time later by reducing the amount of gunk that will dry in the holes. To do this, rinse under blast-force water as soon as you have finished with it. Later, an old toothbrush can aid in clean-up.

This web site generates income from affiliated links and ads at no cost to you to fund continued research · Information on this site is Copyright © 2022· Feel free to cite correctly, but copying whole pages for your website is content theft and will be DCMA'd.
Tagged With: Presses