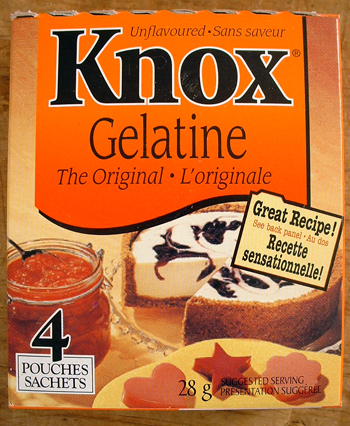 Gelatin is a thickening agent that has no taste, smell or colour. It is made by boiling down animal parts such as hooves, bones, skin and gristle. You can also get kosher Gelatin (made only from animals that are considered kosher and which have been killed in a kosher fashion), and vegetarian Gelatin.

Gelatin used in both savoury and sweet dishes.

Gelatin can be bought in powdered form, or in leaves (small, thin sheets.) The powder tends to be more common at grocery stores in North America. You can also get Gelatin mixes that are already flavoured and sweetened for you.

Powdered Gelatin must first be dissolved in cold water, then have hot water added to rehydrate it.

Commercially, Gelatin is used to stabilize dairy products such as whipped cream and yoghurt and baked goods such as cheesecakes.

Gelatin can still be made “naturally” without the aid of commercial powdered or leaf Gelatin — for instance, in making brawn. 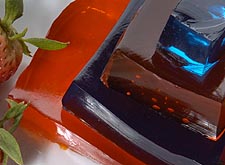 After you’ve dissolved the Gelatin, never boil it, just add hot water to it.

To use leaf Gelatin, put the sheets one at a time into cold water. Let them soften for up to 10 minutes, then stir in your warm liquid. Some people swear that leaf Gelatin is easier and more reliable to use than powdered Gelatin.

When using canned fruit, don’t add the liquid as will water the Gelatin recipe down. Drain well. Don’t discard that juice, though (see under Cooking Tips in Fruit entry for ideas).

The Gelatin needs to reach a certain state of solidness to hold up items such as fruit and veg in it, otherwise they will just sink to the bottom like rocks. Chill the Gelatin until it’s partially set, about the thickness of a raw egg white, then stir your fruit or veg in, and put it back in the fridge to let it finish setting.

If you’re working without a recipe and want to add fruit or vegetable to your jellied salad, the ratio is ½ to 1 cup of add-ins per 1 cup of mixed-up Gelatin. Chop stuff into small pieces first.

Some fruits contain the enzyme called “bromelain”. This enzyme is what makes them useful as meat tenderizers (if you adhere to the school of thought that meat tenderizers really have any useful purpose in life.) Now, remember that Gelatin is actually animal protein. The enzymes are going to “tenderize” the Gelatin the same way they would a piece of meat, which means that your jelly is going to break down. For that reason, you need to avoid using those fruits raw — it’s okay to use them cooked or tinned, though, as the heat will have destroyed the enzyme. The fruits that contain bromelain include figs, ginger root, guavas, kiwis, mangos, passion fruit, papaya, peaches, and pineapples.

All canned fruits are fine to use, as they have been heat treated. Bromelain is destroyed at 175 F (80 C).

If for whatever reason you happen to spill Gelatin on the stovetop, be sure to wipe it off before turning a burner on: it can give off a very foul smell.

Another gelling agent, such as agar-agar.

In the UK, 4 gelatine leaves = 1 11g sachet of gelatine powder

Powdered or leaf Gelatin can be stored indefinitely in a sealed container or wrapping on a shelf.

Flavoured and sweetened Gelatins, though, won’t store as long as plain ones, because the sugar in them will absorb moisture and shorten the shelf-life. To help make up for this, store the packages inside a sealed container if you plan to have them around a long time.

The brand name Jello-O was launched in 1897.

With the launch of Lime Jello-O in America in 1930, the moulded jellied salad would reign supreme for several decades. At one point, a celery-flavoured Jello-O was produced specially for use in salads.

Leung, Wency. Gelatin gets the jiggle back on. Toronto, Canada: The Globe and Mail. 8 September 2010.

This web site generates income from affiliated links and ads at no cost to you to fund continued research · Information on this site is Copyright © 2022· Feel free to cite correctly, but copying whole pages for your website is content theft and will be DCMA'd.
Tagged With: Gelatin