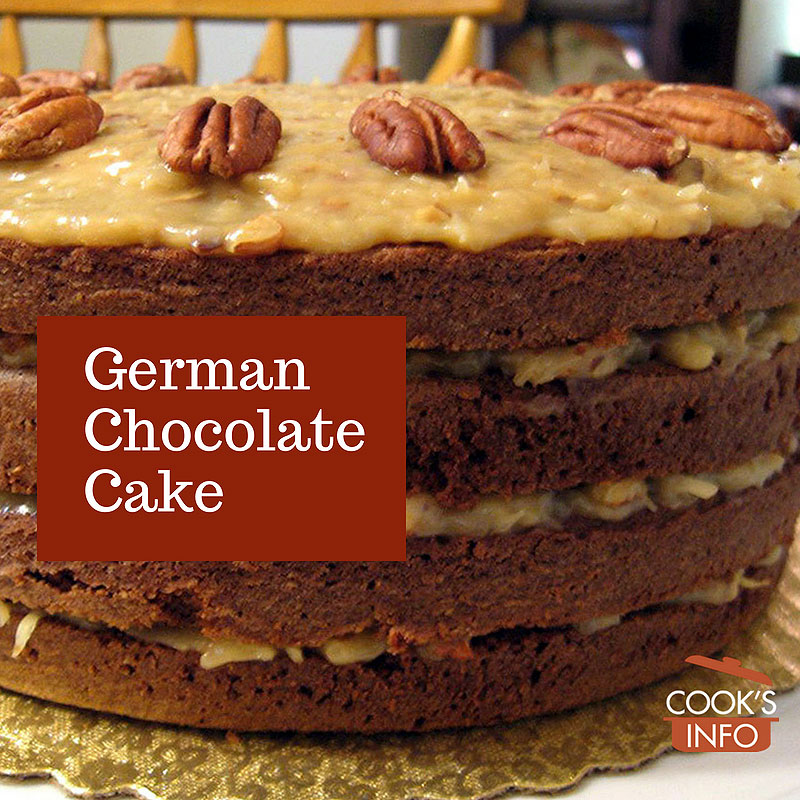 German chocolate cake is a layered chocolate cake with a filling consisting of shredded coconut and chopped pecans amongst its ingredients. The same filling is sometimes used to frost the top though sometimes a separate chocolate icing is made. Traditionally, the sides are left unfrosted.

The chocolate used is German-style dark, semi-sweet chocolate, and hence, its name. German-style baking chocolate, being sweetened, is halfway between Belgian/French style (bitter and unsweetened) and British style chocolate, which is not only unsweetened but has cream added (thus, milk chocolate.)

You can now buy cake mixes for German chocolate cake.

The earliest versions of the cake did not call for the coconut and pecan filling and topping, but that come to be traditional now.

Traditionally, it is made as a three-layer cake. 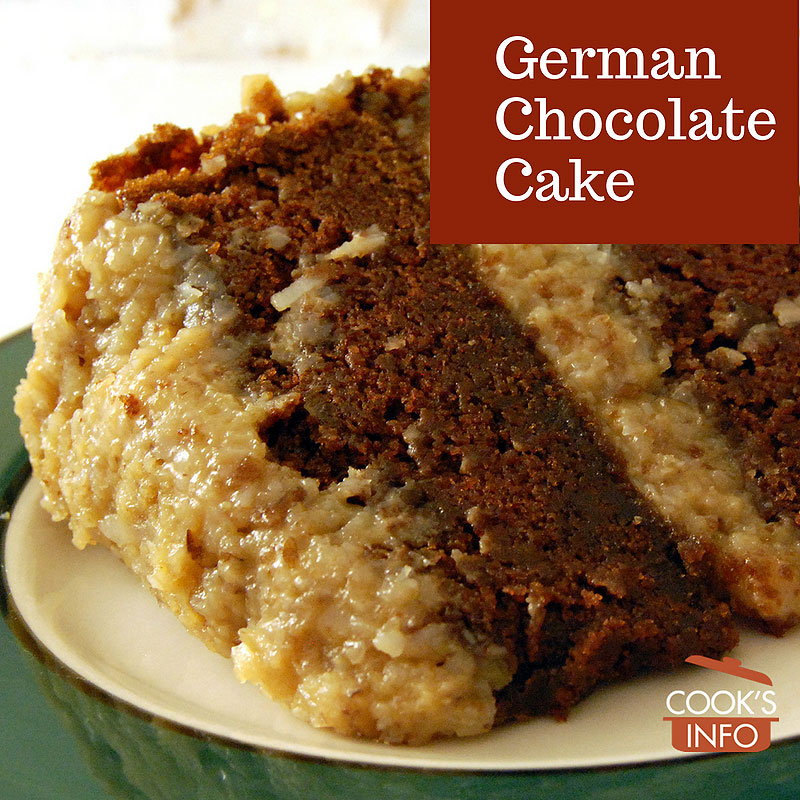 There is much confusion about the history of German chocolate cake, and many false accounts are given about its origin — some of them even passed on with the best of intentions to correct other false accounts.

To be clear, German chocolate cake was not brought from Germany to America by German immigrants, nor was the first recipe for it published in Dallas in 1957, nor was it invented by anyone in Texas, nor is it named specifically for the product named “Baker’s German’s Baking Chocolate” (now owned by Kraft Foods.)

A recipe for German chocolate cake appeared in Trenton, New Jersey in 1905. Though called just a “Novel Chocolate Cake”, the recipe is clearly recognizable as what later came to be called “German chocolate cake”, including instructions which imply that the sides are not to be frosted. The frosting/filling, though, is a plain frosting, without the addition of coconut and nuts which might reflect later prosperity. Note as well in the following the use of baking soda and cream of tartar in place of baking powder: 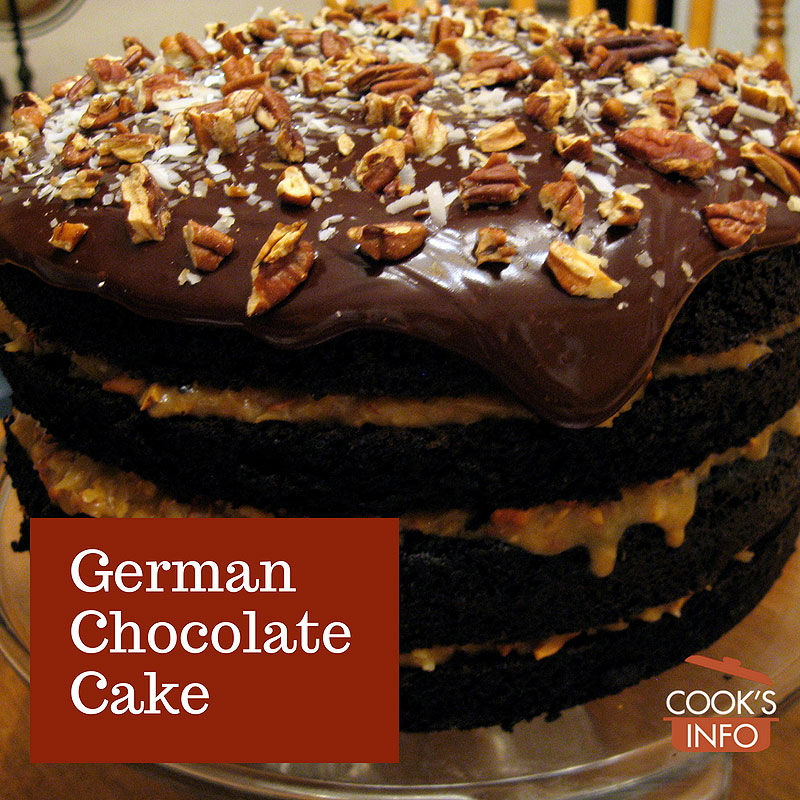 For the next five decades German chocolate cake languished in relative obscurity, until it was rediscovered in the mid to late 1950s.

On 12 April 1957, a mention of German chocolate cake appeared in a published school cafeteria menu in The Daily Journal of Commerce, Texas. (Friday, 12 April 1957. Page Two.) No recipe, though, is given anywhere in the four page newspaper:

Some sources list 3 June 1957 as the time that the recipe first appeared in print, in The Dallas Morning News (submitted by a Mrs George Clay.) This is incorrect, owing to the earlier date of 1905 in Trenton, New Jersey, mentioned above.

It’s true, though, that by December of 1957, the cake was creating a stir even in small-town America, and that it was considered “new.” The North Carolina Daily Times News reported breathlessly:

“There is a new cake that is causing considerable comment here this Christmas. It is a German chocolate cake and everywhere we have been recently someone has been talking about the recipe and how it may be obtained. The other night we were talking to Evelyn Murphy about a delicious cake that she had served at a circle meeting at her home and the conversation turned to German chocolate cake. She told us she had the recipe and we quickly claimed it for any of our readers who might be interested.” [2]Burlington, North Carolina Daily Times News, Tuesday, December 17, 1957, page 3, “People You Know” column.

Here is the recipe (submitted by an Evelyn Murphy) that followed this introduction. This 1957 version, with its increased amount of chocolate and the addition of pecans and coconut to the filling between layers, may reflect the growing prosperity of the American kitchen:

Melt chocolate in boiling water. Add vanilla and salt after chocolate is melted. Cream shortening and sugar and add beaten egg yolks. Add ¾ cup of the buttermilk alternately with sifted flour. Dissolve soda in remaining ¼ cup buttermilk and add to creamed mixture. Stir in chocolate. Fold in egg white. Bake in three 9-inch pans at 350 degrees for 25 to 30 minutes.

Beat egg yolks and set aside. Mix flour, sugar, salt, and stir into milk or cream. Add butter or margarine, and cook over low heat until butter is melted. Pour small amount over egg yolks, beat and add yolks to milk mixture. Add pecans and coconut. Cook until thick, stirring constantly. Remove from heat, add vanilla; spread between layers and over top.”

By 1958, though, some people did appear to think that not only was the recipe new, but that it had originated in the American south-west. The Post-Standard of Syracuse, New York, wrote:

“German Chocolate Cake: This German chocolate cake has taken the great southwest by storm. From one woman to another — deep in the heart of Texas — the recipe has spread. Now, see for yourself how marvelous it is…..” (caption under a photo). Elsewhere on the same page, heading up the recipe, was the text: “Cake Recipe Travels Fast: Starting with an unknown homemaker in Texas or Oklahoma, this recipe for German chocolate cake has travelled like wildfire north, south, west and east, almost entirely by word of mouth. It’s a fairly elaborate cake. It uses a unique ingredient …. delicately flavoured German sweet chocolate.” [3]The Post-Standard. Syracuse, New York. Thursday, 7 August 1958. Page 9.

The ingredients of this 1958 version, given on the same page in the Post-Standard, are basically the same as the 1957 version, though the amount of coconut and pecans has been increased, and the procedure has become more elaborate, perhaps as cooks vied to make the best cake, or to make the recipe their own.

Melt chocolate in ½ cup of boiling water. Cool. Cream butter and sugar until light and fluffy. Add egg yolks one at a time, beating after each. Add vanilla and melted chocolate and mix until blended. Sift flour with soda and salt. Add sifted dry ingredients alternately with buttermilk, beating after each addition until batter is smooth.

Note: Do Not Frost Sides of Cakes.”

By 1959, German chocolate cake had definitely hit the big time when it arrived at the card tables in Reno, Nevada: 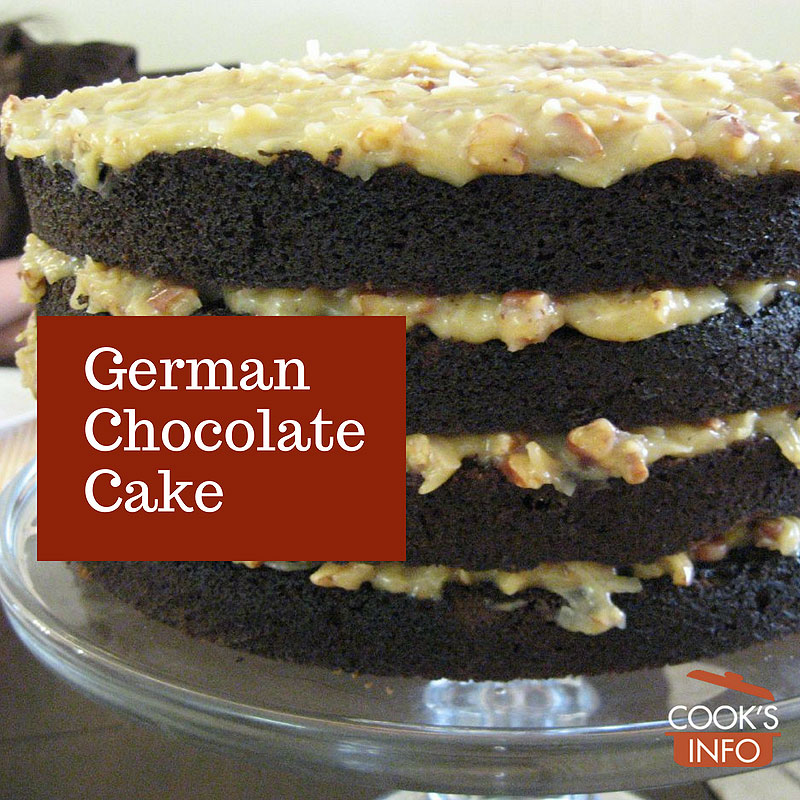