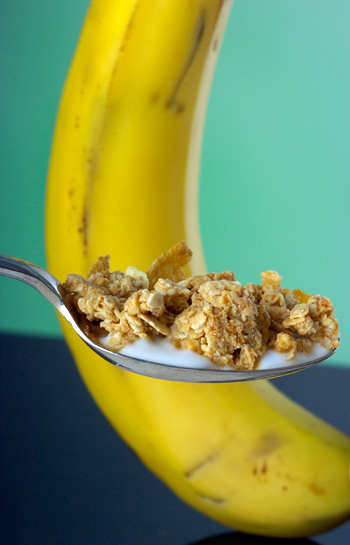 Granola is a mix of grains, fruits and nuts mostly used as a breakfast cereal with milk on it.

It can be used also as a dessert topping for yoghurt or fruit dishes, or pastries, or a snack to eat out of hand, or an ingredient in cooking.

It is a chewy cereal, made from grains, dried fruits, nuts, usually an oil as a binder, and a sweetener, baked until somewhat crispy. It is stirred during baking to ensure that minimal clumping happens.

The dried fruits can be raisins, dates, apricots, cherries, cranberries, figs, pineapple, crystallized ginger, zest of lemon or orange, etc. The grains can be rolled oats, occasionally rice; seeds such as sunflower are common. Some recipes add shredded unsweetened coconut, and bits of bittersweet chocolate or chocolate chips.

Some recipes use oil, some use melted butter.

Honey is usual as the sweetener, but some recipes use maple syrup. A small amount of brown or white sugar can be added to increase the sweetness further.

Some recipes add spices, such as cinnamon and nutmeg.

The term “Granola” is still trademarked in Australia, owned by the Sanitarium Health Food Company, which is in turn owned by the Seventh-day Adventist Church; the late 1800s trademark in the USA has expired.

Granola is generally high in protein and fibre. It can be high in fat owing to the oil, nuts, and seeds.

Store for up to several months in a sealed container in refrigerator.

The concept of Granola was developed in the late 1800s in America, by two different people. Dr. James Caleb Jackson (1811 – 1895) at the Jackson Sanitarium in Dansville, New York, came up with his approach in 1863, and called it Granula. He formed the “Our Home Granula Company” to sell it.

His was wheat grains exclusively, soaked in water, formed into a thin sheet, and baked. The sheet was then ground up, and re-baked. This resulted in a very hard concoction that had to be soaked in a liquid such as milk or water for 20 minutes at least before eating; or ideally, overnight.

A frequent border at the sanitarium was Ellen G. White, who would later become a founder of the Seventh Day Adventist Church; she was much influenced by the dietary ideas at the sanitarium.

John Harvey Kellogg, an early Seventh Day Adventist, came up with a similar cereal in 1877. He mixed grains of wheat, oatmeal, and cornmeal, that he also baked in sheets, then ground it up. He called his “Granula”, too, but to owing to being sued by the Granula company, swapped the name in 1881 to “Granola.”

The cereal didn’t really come into its own for popularity, though, until the 1960s, when Los Angeles author Dorothea Van Gundy Jones, a Seventh Day Adventist herself, included the first printed recipe for granola in her 1963 book, “The Soybean Cookbook.” It was in the 1960s that dried fruit and nuts were added to the concept.

He sold the rights for it in 1964 to the Sovex Natural Foods company of Collegedale, Tennessee for $3,000. Three years later, he paid $1,500 to regain the rights to the recipe west of the Rocky Mountains, then flipped that around and sold it to Lassen Foods (of Chico, California) for $18,000.

Coincidentally, Gentry (reputedly) and both of the companies involved were founded and owned by Seventh Day Adventists.

In 1972, Pet Milk introduced its version of granola, its first ever cereal, calling it “Heartland Natural Cereal”, championed by an executive there, Jim Matson.

Within a year, Quaker, Kellogg’s, and General Mills introduced their granolas.

Heartland still claims to be the first nationally-distributed granola. The brand was bought in 1998 by McKee Foods, who had earlier purchased Sovex in 1974. Sovex’s name was chanted to “Blue Planet Foods” in 2004.

To call someone a “granola” means they are a hippy or a “health food nut.”