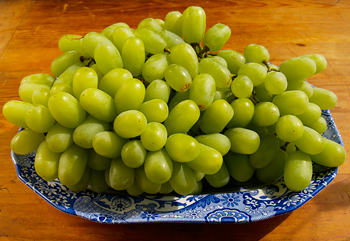 Grapes are grown on vines that produce clusters of small fruit. The vines are staked and trained, so that they don’t grow on the ground.

Many fruit growers have to worry about how to get the flowers of their fruit plants or trees pollinated so that fruit will be produced. That’s one thing Grape growers don’t have to worry about: Grape vines can pollinate themselves. To grow them, though, growers can’t simply just plant Grape seeds. Grapes don’t reproduce via seed true to themselves. The results aren’t quite as erratic as when you try to grow apples from seed, but they’re still not reliable enough. Consequently, Grapes are reproduced by graftings and cuttings.

There are over a thousand varieties of Grapes. Most have seeds, some are seedless (or at least they seem to be — see entry on Seedless Grapes.)

Grape skins can be green, red or so dark red they’re almost purple or black.

Wash and pat dry with clean tea towel or paper towel. To eat, just pull the Grapes off their stems, or use that marvel of our Victorian ancestors, silver Grape scissors.

Store unwashed in a plastic bag in the fridge for up to 1 week. Washing them before storing will make them go bad much faster.

When France was still subtropical forests, a primitive ancestor of the Grape, vitis sezonnensis, was already growing there between 55 and 33 million years ago.

Even though for most of man’s existence, basic food to stay alive was the core focus of his activities, he still found time to grow Grapes. Grapes provided wine, which made all his troubles seem a bit less, and which would could sold for a higher profit than mere surplus beans would fetch.

The earliest written reference to vineyards appears to be that in the Epic of Gilgamesh, which dates from around 1800 BC.

Romans would let Grape vines grow along the ground or up trees. When staking came along, it was a new “technique” for them.

In what are now Muslim countries, Grape vines flourished up until the 700s. The prized vineyards of Egypt were burnt along with the library at Alexandria.

It was assumed that European varieties (vinifera) wouldn’t survive in North American winters, so all growers stuck with the Concord Grape, which no one was really happy with — it produced terrible wines, and fared shipping to market as a fresh fruit very poorly. In the 1950s, a man named Konstantin Frank in the Finger Lakes region of New York State challenged the assumption about European Grapes. A native of Russia, he reasoned that if Grapes could survive Russian winters, they could survive winter in the Northern US. He was proved right (he was vindicated very early on in the game, as 1957 was a very bitter, cold winter), and vinifera Grape cultivation started in earnest in North America.

Most grapes in France are actually American grapes. Or American rootstock, at least. European grapes were almost wiped out in 1800 by a louse that infects the roots of grape vines.

The louse is called “phylloxera vastatrix” (aka “Dactylasphaera vitifoliae”, or PV for short.) To this day, there is no remedy for the louse. It is like a small, yellow aphid, about 1mm long, just barely visible to the naked eye. It lives underground, and feeds on the roots of the vines by sucking the sap out of them, especially the tips, It creates galls, which then decay and weaken the plants, and other infections such as funguses take over and kill them in 2 or 3 years. The roots turn black and rot

The female stays in one place on the roots, and lays her eggs around her. When they hatch the young will travel to new roots, and colonize them. By the time that it’s apparent a grape vine is dying, it’s probable that the rest of the vineyard is affected. The PV louse, however, cannot survive in sandy soil.

Chris Campbell (The Botanist and the Vintner–How Wine Was Saved for the World. Algonquin Books:2005) found that problems were first reported in the greenhouses of amateur gardeners in Ireland and England. On the continent, he believes that ground zero was the small village of Roquemaure, north of Avignon, in the Rhône region. A vine grower had imported and planted some American vines in 1862; by 1864, Campbell found, reports began of nearby European vines withering and dying.

Once a vine is dead, the louse will move onto another vine where it can feed, so digging up the root and inspecting it won’t reveal the cause. Because of this, the French couldn’t figure out what was happening right away. They set up a commission in 1868 to try to figure it out. They began digging up even healthy vines, which enabled them to see that even the vines which appeared to be healthy had the yellow insects on them, but they thought that the louse was a parasite, and living there because the vine was dying — they didn’t yet see it as the cause.

In 1870, France started a war with Prussia, and that took the government’s attention away from the problem, but by 1873, with tax revenue markedly decreasing because of the increasing devastation in the wine industry, it got their attention again. A second commission was created, offering a prize of 300,000 French francs for curing the problem. By 1877, they noticed the connection between the areas of France that were affected and the areas that had imported grapes from America, and they had decided that the insect was causing the problem. They tried to find ways to interrupt the life and reproductive cycle of the insect, but were foiled because a good deal of the time the insect reproduces underground — and asexually.

They saw, however, that American vines were resistant. The person leading the commission, a Professor Planchon, started a campaign to convince people that grafting onto American rootstock would solve the problem. Some felt that the American root stock would change the taste of the grapes, and the wine, but there was no other way to save the grapes. Many of the top areas such as Cognac had limestone-rich soil, and rootstock that would thrive in that soil had to be identified. Eventually they hit upon a hybrid of a wild grape that grew in northern Texas, Vitis berlandieri, where the soil was also limestone. But the new rootstock, while it solved the problem, brought a new mildew along with it, creating its own secondary problems. The conversion to the new rootstock was slow: many areas of France didn’t want to allow any more imports at all from America owing to its reputation to being infested.

40% of France’s vines were wiped out; 80% of the surviving vines had to be replanted by grafting. The cost of recovery is estimated at 12,000 million French Francs at the time, more than twice what France had spent on its disastrous war with Prussia.

The 300,000 Franc prize was never awarded, because they felt that the solution of grafting that was ultimately come up with was a work around, rather than a cure.

Chile is free from the problem. Its soil is very sandy, and it hasn’t imported vines from America. The PV louse was discovered in Victoria, Australia in 1875. Knowing from Europe the damage that could be caused if it spread, the government of Victoria tried to contain it by destroying vines and even sterilizing the soil, but it didn’t work. It hit the north island of New Zealand at the end of the 1800s.

The famous French chef, Georges Auguste Escoffier (1846 – 1935), felt that Grapes should be peeled.

“The French governent subsidized wine-growers. Result: too many people grew grapes, and not enough of them made money, thus requiring more subsidies. A crazy system.” — Julia Child with Alex Prud’homme. My Life in France. New York: Alfred A. Knopf. 2006. p 147.