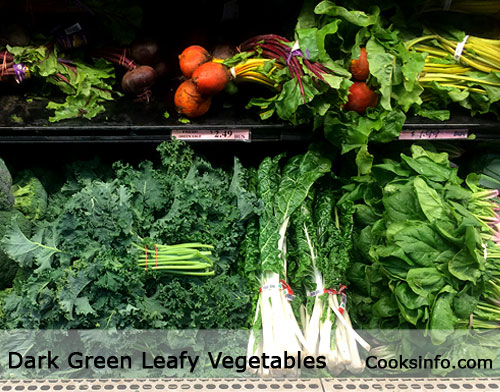 Leafy vegetables are always green (except for those that have been blanched artificially in the growing process, such as Belgian Endive), but some leafy vegetables are distinguished further by being called “Dark Green Leafy Vegetables.”

Depending on how the speaker means the word, greens can mean salad greens or cooking greens. Salad greens are just any leafy green vegetable that you are going to use fresh in a salad.

Most of the time, though, Greens is used to mean leafy green vegetables that might be cooked. If someone says he is going to “fix you up a mess of greens”, it probably doesn’t involve a bottle of Thousand Island Dressing, but it might involve bacon fat. Among such greens are Brussels Tops, Beet Leaves, Collard, Kale, Turnip Leaves, Spinach and Swiss Chard. For the most part, they are cabbage family members whose leaves don’t clump together in a head.

The darker the leaf, the more Vitamin A, Vitamin C, and calcium the leaves will have.

Some dark cooking greens could be eaten raw, but they are cooked to mellow the flavour, which is usually a bit bitter, and to tenderize them.

Greens are well liked in the American south. Acres would be given over to growing them to provide cheap nutrition to the slaves. The slaves were also given leftover pig bits such as the trotters. With these pieces of pork, the slaves came up a style of cooking Greens that the white people then adopted. In the south, a cooked dish of Greens is often referred to as a “mess of greens.” The juice left in the pot after cooking Greens is well liked by southerners as well; they call it “Pot Likker.”

When buying, choose crisp leaves with deep colour and no yellowing or bug holes.

All cooking Greens need a thorough washing to remove dirt and sand. Some, such as spinach, just need braising or steaming for 3 minutes, others like Kale and Collard benefit from much longer cooking times.

Salad greens such as Rocket and Watercress are lovely when just slightly wilted in a warm dish; their peppery taste becomes slightly mellowed and sweetened.

The darker the leaf, the more “pronounced” the taste, which is why it’s more of a battle to get people to eat them. They are often cooked paired with fats such as oil, butter, bacon fat, etc, to make them more appealing.

Most greens have slightly bitter flavour that responds well to a low and slow braising, especially if some fat is added, either in the form of butter, oil, milk or smoked or salted pork.

Some greens such as arugula are served raw (or only gently heated); some such as kale are usually served well cooked; others such as spinach can be served raw or cooked.

This web site generates income from affiliated links and ads at no cost to you to fund continued research · Information on this site is Copyright © 2022· Feel free to cite correctly, but copying whole pages for your website is content theft and will be DCMA'd.
Tagged With: Leafy Vegetables