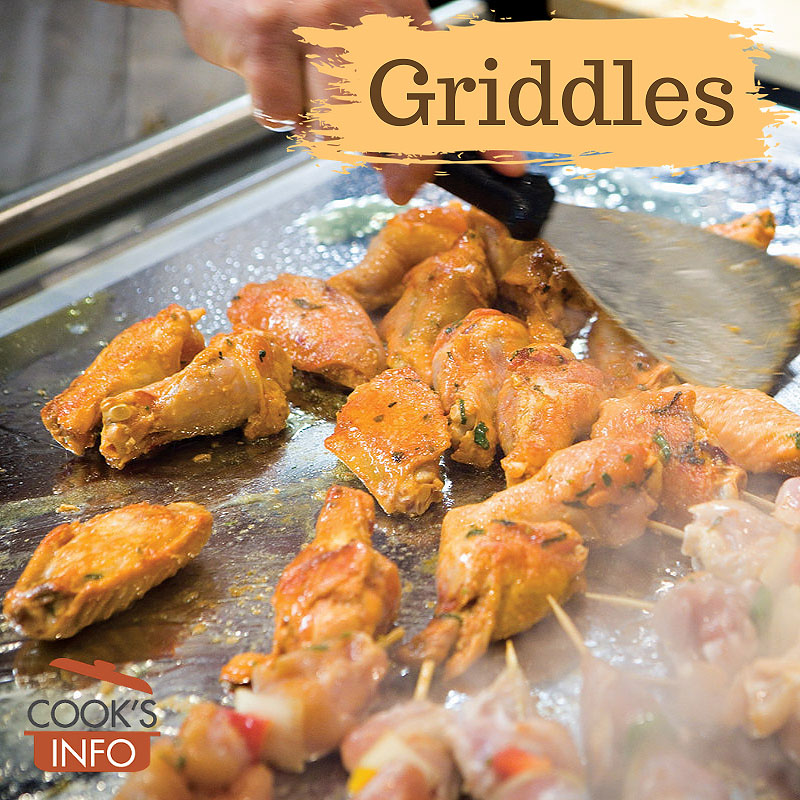 Griddles are flat surfaces with no sides which are heated for cooking food items on. The absence of sides makes it easier to flip items being cooked on them.

There are different models for commercial and domestic use.

Griddles are usually made of cast iron, or of aluminum, with a non-stick finish.

The metal plate that makes up the surface will vary from .3 to 2.5 cm (⅛ inch to 1 inch) thick, depending on the type of griddle.

Heavy griddles are considered by many the best, because they distribute the heat more evenly.

Modern home-use griddles now often have side gutters, and are often “reversible”, with a ridged-face on the other side of them.

The side gutters are for grease and food debris to be scraped into. Often there is a raised back that acts as a splatter guard.

Smaller ones may have one long handle; longer, rectangular ones will have a handle at each end. A Mexican comal is a round griddle, often but not always with a handle, used for baking tortillas on.

Sometimes griddled foods need to be finished in the oven; you may wish to bear that in mind when buying a griddle pan and choose one with an ovenproof handle, though none of the electric griddles will be oven-safe. 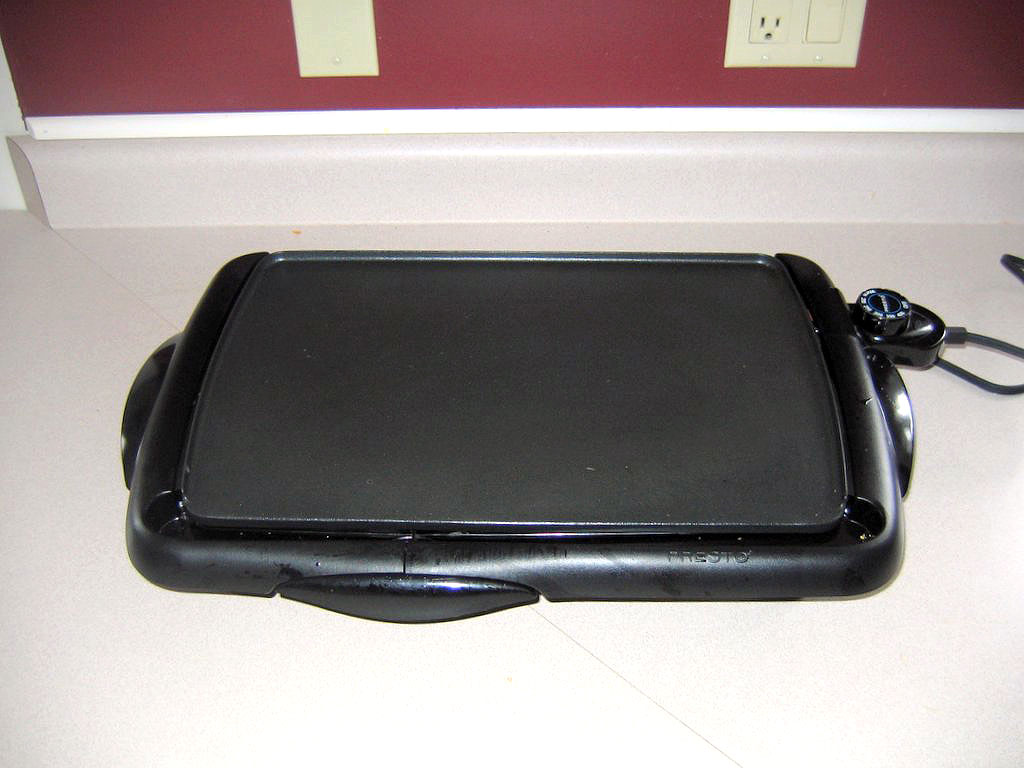 Now, most griddles have ridges on them (except for pancake griddles), and the idea behind griddling in the popular mind is to cook the food with a slight char on it, in initiation of grilling. The ridges both give score marks to the food, and allow fat to drain off. As such a look can be achieved indoors, and without backyard grilling facilities needed, it is becoming very popular now.

In fact, because of this, a “griddle” is often confused now in popular language usage with a “grill.”

You can get double-sided cast iron griddles. One side is flat, the other side ridged. They are designed to go over two burners on a stove top. The spot in the middle, where there is no burner, will be cooler and not as hot as the ends.

The double-sided concept has one drawback: people have found that if you get one side seasoned, and then flip it over and cook with the other side on a flame burner, the seasoning on the underside may get damaged. 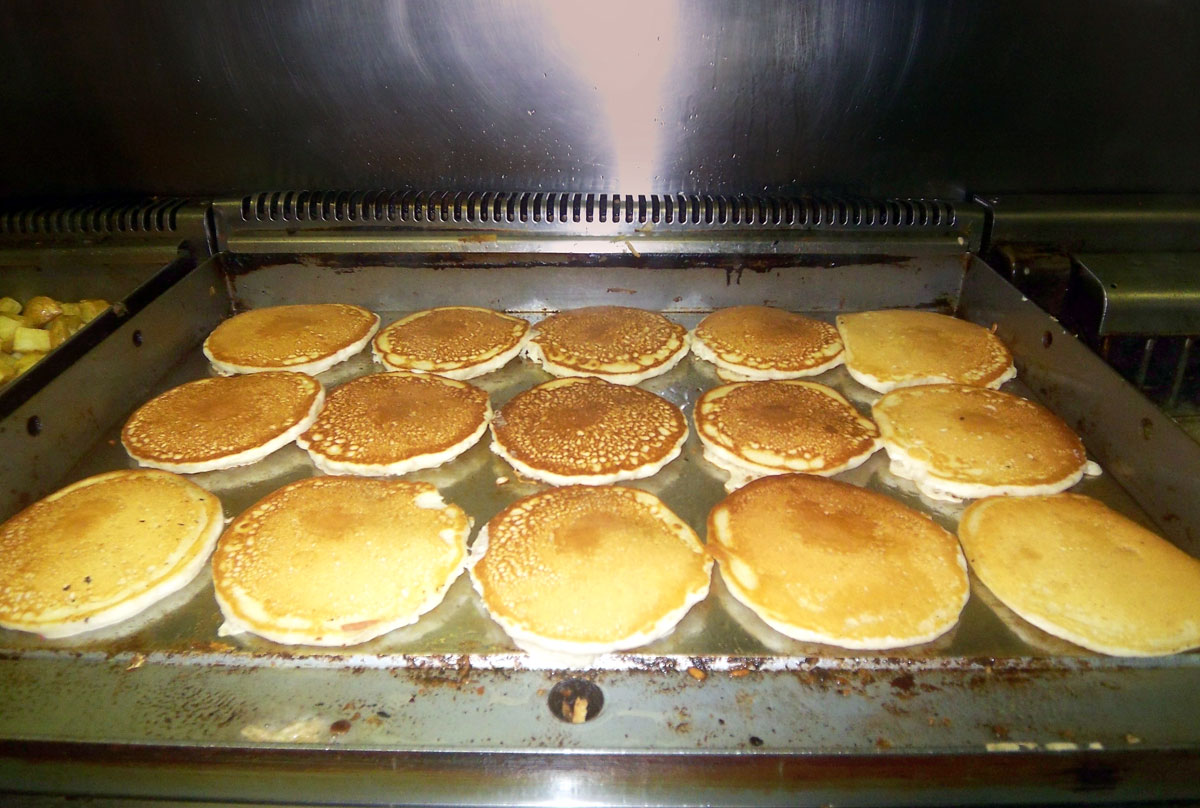 Griddles should be hot before putting the food on them, or the food will stick. The food will also stick if you turn it too early. As meat cooks, it will at first stick, then release itself when it is actually time to turn it.

A smoking griddle is caused by too much oil or marinade on what you are cooking; drain or shake any excess marinade or oil off before putting your food item on your griddle pan.

For restaurant griddles, before each use, brush the griddle surface with vegetable oil, heat to 200 C (400 F), leave it at that temperature for 5 minutes, then scrape excess oil off, and cook (this procedure is not needed for non-stick, seasoned cast iron, or chromium surfaces.) To clean a restaurant griddle, let it cool down to just warm, empty the well where the fat has drained, scrape surface with a scraper, spread water and soap over top, let sit for a few minutes, brush clean, and rinse. Some people like to use soda water in the cleaning.

Griddling used to be mostly used for cooking quickbreads on it, such as scones, English muffins, crumpets, etc, and consequently the surface was flat. 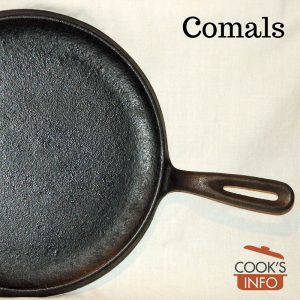 A comal is a round, thin griddle pan for baking and toasting foods in Mexico, Central America, and parts of South America. Comals have very low-rimmed edges to allow food to easily be slid off. 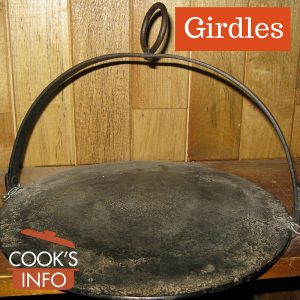 A girdle is like a griddle, in that it's a flat cooking surface, but instead of being set on top of the heat source, it's hung over it. A girdle was used for "baking" items such as bannock and scones. You cook the items on it, as you would a pancake. 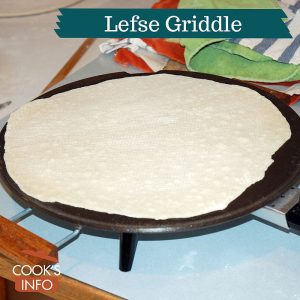 A lefse griddle is a very large, flat, round cooking surface designed specially for baking the Norwegian flat bread called "lefse." It has no edges on it and just a slightly raised rim.

This web site generates income from affiliated links and ads at no cost to you to fund continued research · Information on this site is Copyright © 2023· Feel free to cite correctly, but copying whole pages for your website is content theft and will be DCMA'd.
Tagged With: Pancakes