There are only three ingredients in a grilled cheese sandwich: bread, cheese and butter (or margarine.) The goal is to brown the outsides of the sandwich, and melt the cheese inside.

The outsides of the sandwich are buttered, not the insides. You butter two slices of bread on one of their sides only. Place one slice buttered-face down in a heated pan, and put the cheese on top of it. Put on the remaining sliced, buttered side up. After a few minutes, use a flipper to check on the sandwich. When the bottom side is browned, flip to brown the top side. When ready, the outside should be evenly golden-brown and crispy, and the cheese inside melted.

Some people add oil to the pan, some butter. Some add no fat, especially if they are using a non-stick pan. The pan must be hot first, or you’ll never get the right colour. But, the heat can’t be too high, or bread will start to burn before the cheese melts. Some people like to cover the pan to keep heat in to help the cheese melt.

The bread normally used is sliced American white bread. You can experiment with the cheese. While most people expect cheddar, you could use Colby, Gruyère, Swiss, Havarti, etc. Some people use grated cheese, but the norm is cheese slices and particularly, processed American cheese slices as they melt the best for the sandwich. You can also use a cheese spread such as Cheez Whiz.

Some people like to added thinly sliced tomato or onion in the middle. The question is always how far can you change the sandwich before it stops being a grilled cheese sandwich. Some like to add a slice of ham in the middle — but that makes it a Croque Monsieur, even if they’ve never heard that term.

Some people like their grilled cheese to be as flat and dense as possible. The accomplish this either by press down on the sandwich with the flipper while it is cooking, or by putting a weight such as a bacon press on it, or by making it in a sandwich press. Others don’t like the idea of a pressed-down, “mooshed” grilled cheese.

The classic accompaniment is tomato soup at home, or perhaps French fries at a restaurant. Many like to dip each bite of their sandwich in ketchup.

It is very hard to wrap a grilled cheese sandwich for takeout, because any wrapping at all seems to trap the steam and cause the toasted bread to lose its crispiness.

Cooked cheese and bread combinations have been around for as long as bread and cheese have been.

Alan Davidson, in his “Oxford Companion to Food” (Oxford University Press: Oxford. 1999 pp. 796-7), says that melted cheese appeared as a topping on toast by the end of the 1500s.

And, in Paris, by 1910 Croque Monsieurs — a grilled cheese with a ham slice in it — were being made.

Sandwiches called “Grilled Cheese” appeared on the American scene in the 1920s. That, coincidentally, is when both sliced bread and affordable domestic American cheese were readily available — though the cheese didn’t come already sliced at the time. The Monte Cristo sandwich, another fried sandwich with cheese in it, can be dated for certain back to 1923.

Before then, the sandwich was likely to be called “toasted cheese.” It could be cooked by broiling, baking or frying, and was most likely to be open-faced, and for all intents and purposes, really just have been Welsh Rabbit by another name.

Even when the term popped onto the scene, interpretations of what should be called a grilled cheese continued to vary a great deal. The sandwich could be open-faced, it could be broiled cheese on toast, it could be a cheese sauce on toast broiled.

The first printed reference to grilled cheese that CooksInfo has found is from 1929. The writer is almost certainly speaking of a heated, flat-surfaced tabletop device because other dishes she suggests are scrambled eggs, curried dishes, creamed chicken or mushrooms, beef or chicken hash, fried tomatoes, etc. But as there is no illustration, we can’t know if she intended her grilled cheese to be open-faced, or made with two pieces of bread:

“Well, Mrs. Newlywed, there are a number of things that can be prepared at table on a grill ….. Dishes that may be prepared on an Electric Grill: All types of hot sandwiches such as grilled cheese, tongue and egg, club, sardine, etc.” — Carey, Nancy. Hot Sandwiches and Creamed Dishes Cooked on a Grill. Syracuse, New York: Syracuse Herald. 22 April 1929. Page 18.

In the same year, and shortly afterwards, there are references to it being an ideal outdoors or camping food:

“The Camp Fire Girls and Girl Scouts are being educated into all the fine points of camp life. They are taught to cook many kinds of food (which the old camper fried) on the end of a green stick over a fire. Bread may be toasted ….by means of a sharpened green stick and a good fire. Did you ever try… Grilled Cheese Sandwiches. — Spread bread with butter and place a thin slice of cheese between two slices. Either toast, or saute in a little bacon fat over the fire in a frying pan.” — Camp Cooking in “The Kitchen Cabinet Column.”. Nashua, Iowa: The Nashua Reporter. 17 July 1929. Page 9.

“Grilled cheese sandwiches are delightful when made in the open. Lay large, thin slices of cheese between two slices of buttered bread. Either toast these on the end of a green stick or a gridiron or sauté them in bacon fat in a saucepan. Those who take long hikes will be interested to know that if cheese is wrapped in a cloth moistened with vinegar, it will not mold so quickly.” — Galveston Daily News. Auto Lunches for the Week-End Trip. Galveston, Texas. 7 June 1930. Page 14.

Then, in the 1930s, there is a flurry of references to the sandwich as a lunch, particularly a lunch-counter, sandwich. Note that the illustration in the 1939 advertisement shows it as a sandwich with two pieces of bread: 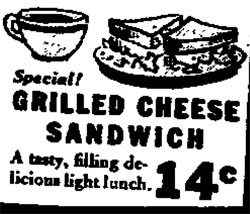 This reference might imply that the grilled cheese in question was open faced:

“Grilled cheese sandwiches are nice, but you’d be surprised at the amount of difference added to the taste if halved walnuts are pressed into the cheese while the sandwich is warm. It’s decidedly an improvement.” — Stern, Aline. Home-Making. Huntingdon, Pennsylvania: Daily News. 21 February 1934. P. 7.

Here is a reference to someone definitely buttering the outsides of the sandwich:

“Miriam Lowenberg, of the Foods and Nutrition Department at Iowa State, has a special grilled cheese sandwich that goes straight to the heart. She spreads whole cream cheese on unbuttered bread, adds a bit of prepared mustard to which a drop of Worcestershire sauce has been added, then — and this is what makes it different — she butters the outside of the sandwich lightly and toasts it in the broiler oven, or browns it quickly in a heavy skillet.” — For the Homemaker column. Milford, Iowa: The Milford Mail. 25 January 1934. Page 2.

Here, in 1936, is a recipe that has the inside of the sandwich being a cheese sauce:

“Grilled Cheese Sandwiches
1 hard-cooked egg
1 ½ tablespoons pimento
1 small onion
⅓ pound American cheese
½ cup evaporated milk
½ teaspoon salt
1 tablespoon butter
1 tablespoon flour
1 tablespoon Worcestershire sauce
Put the egg, pimento and onion with the cheese through a food chopper using the medium knife. Melt the butter in a saucepan and add the flour with the seasoning. Add the milk and stir until the mixture comes to a boil. Combine this mixture with the cheese mixture and spread between slices of
bread. Butter the outside of the bread and toast under a low flame until golden brown.” — Cheese Dishes to serve in Lent. Hammond Times. Hammond, Indiana. 6 March 1936. Page 7.

Kraft introduced cheese sold in individual slices in 1950, which soon became the standard cheese to use.

By the 1960s, a top slice had definitely become the standard, along with frying the sandwich on a griddle or frying pan.

Some people in Northern California still say they prefer to call it a “toasted cheese sandwich,” but on the American east coast, it’s definitely a “grilled cheese.”

Ozersky, Josh. Grilled Cheese Should Be Made by Moms, Not Restaurants. Time Magazine. 3 August 2011.