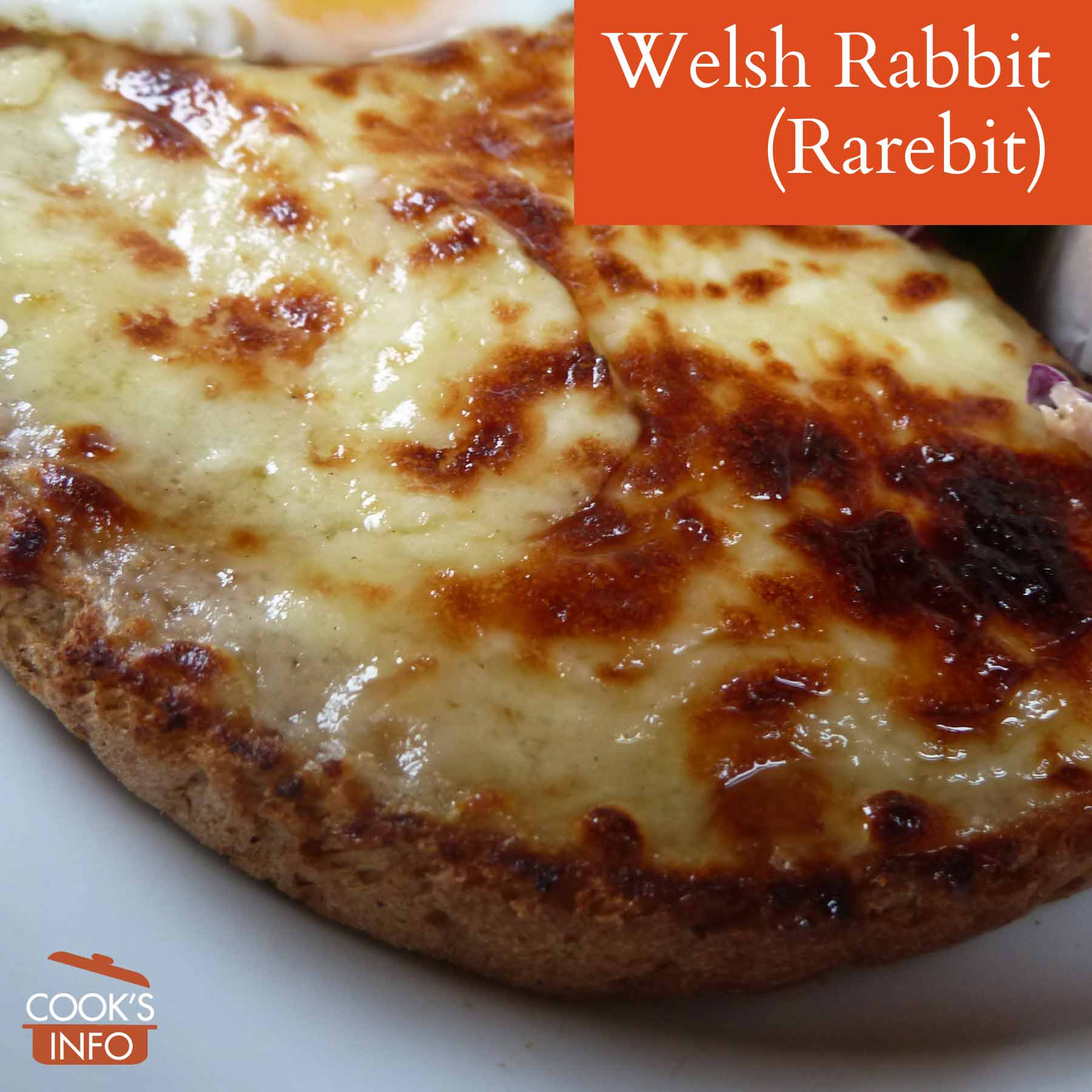 Welsh rabbit (rarebit) is a savoury dish of cheese on toast. It was traditionally served at the end of a meal as a final savoury.

It is made with slices of toast with a cheese mixture spread on top, then put under a high heat for a few minutes to get the cheese bubbly. The cheese is usually a cheddar.

There are actually several different ways to do make Welsh rabbit. It can just be a plain old cheese slice on bread browned under a grill (though some say that’s just cheese on toast.) Or, the cheese can be a mixture of grated cheese, English mustard powder, and Worcestershire sauce. Some versions have you make a cold sauce with wine or beer in it, with the sauce getting cooked under the grill. Other versions of Welsh rabbit have you cook the sauce first in a pot.

In North America, milk is more likely to be used than beer or wine for the liquid in any sauce.

Some fancier versions of Welsh rabbit use two or more different kinds of cheese, and have you remove the crusts before toasting.

Some of the variations of Welsh rabbit have their own names, as below.

The bread is toasted, then a small bit of red port is poured on the toast, then grated cheese or a sliced of cheese is put on it, then grilled.

Herbs, onions and vinegar are added to the sauce.

For Scotch Rabbit [sic, not spelt “Scottish”], you cut the crusts off (which admittedly doesn’t sound very Scottish), toast the bread, butter it, toast a piece of cheese separately on both sides, put it on the buttered toast and serve immediately. How you toast a piece of cheese without it melting into a puddle isn’t clear. In Scotland, the cheese may be Dunlop cheese.

With Yorkshire Rabbit, the toast is buttered before the cheese mixture is spread on top, then a slice of bacon or ham, or a poached or fried egg, is placed on it. Some American versions of Yorkshire Rabbit use a toasted English muffin instead of toast, and put both bacon or ham, and poached egg on top it.

“The following is the process given by Beauvilliers for making Welsh rabbit, Woulche rabbette, or Lapin Gallois.

Take slices of bread toasted of a fine brown colour: pare the rind off some Gloucester cheese, cut it into small dice, put it into a sauce-pan to dissolve with a very little water; add a little Cayenne pepper: when dissolved spread it on the hot toast; brown it up with a salamander held at a distance over it, and serve it up with mustard and salt.

We see, however, that if Beauvilliers has put the name in masquerade, he has not spoiled or disguised the process. PHILOIN.” — The Analectic Magazine. Philadelphia. Volume X. July to December 1817. Art. II. Wine. Page 483.

To grill the cheese on top, you would put the Welsh Rabbit in a tin “reflecting oven” placed into your hearth, or pass a red-hot poker over the cheese. In a wealthier household perhaps, you might use a red hot salamander instead of a poker.

Rarebit may have been a reinterpretation of the word, as in “rare bit” because by that time it was being made in fancy homes in chafing dishes, and the “rarebit” name was more fitting to its new, elevated status in the wealthier homes.

Even when spelt “rarebit”, is still pronounced “rabbit.”

Some wags have suggested that Welsh Rabbit may have been a name meant to poke fun at the Welsh, suggesting that they couldn’t afford a rabbit.

The term “Welsh Rarebit” in Welsh would actually be translated as “Tamaid Anghyffredin Cymreig.”

This web site generates income from affiliated links and ads at no cost to you to fund continued research · Information on this site is Copyright © 2022· Feel free to cite correctly, but copying whole pages for your website is content theft and will be DCMA'd.
Tagged With: British Food, Welsh Food