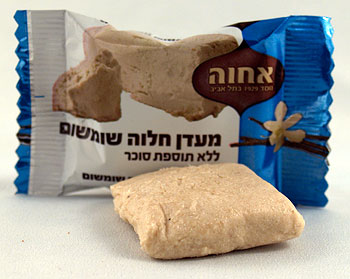 Contents hide
So you think you know from Halvah?

There are many versions of Halvah: Greek, Indian, Iranian, Israeli, Pakistanian, Turkish, etc. Every country thinks their version of Halvah is the best, or that it is original to them.

The nougat-like version that uses crushed sesame seeds, tahini and honey is just that — one version. It is formed into large, buff-coloured blocks and pieces are cut off for you when you buy it. Sometimes the blocks are sprinkled on top with nuts, such as crushed pistachios. Sometimes, chocolate is swirled in. You can also get this kind in cans. Some people don’t like it the first time they try it owing to the texture — they think it’s like sweetened sawdust.

Some Halvahs (such as Iranian) are more like spreads. A Pakistanian version uses semolina instead. In some parts of northern Greece, a form of Halvah is made using sheep’s milk. One version in Turkey is like a porridge, made with semolina and milk. In the Gulf States, there is a version that is made with ground almonds, formed into patties, and fried.

In India, there are two main versions: one made with raisins in it, another with carrots. The carrot one, called Gaajar Halvah (“Gaajar” means carrot) is made with carrots, milk, and sugar cooked down to the consistency of fudge. Nuts may be added. The tops of the blocks are often adorned with silvery vark. Makers of any kind of sweets in India are called halvais. Most halvais people in India belong to the Pardeshi race.

Many American-made versions of Halvah are very sweet.

Often advertised as a healthful dessert.

Refrigerate for up to 6 months tightly wrapped or in a sealed container.

Sometimes people will say that Halvah was Turkish in origin. They’re not far off, though to be more exact, it was Byzantine in origin. It was being made back when what would become Turkey was still Christian, during the time when Byzantium ruled that corner of the world. In the 1200s, there were at least two versions of Halvah made by the Byzantines, one made with grape syrup, and another with almonds in it.

An American brand, Joyvah, was founded in Brooklyn in 1906 by Nathan Radutzky.

“Thousand-year-old halvah, one of the world’s finest confections, is now being vacuum-canned for national distribution. Packer is the Radutzky family, father Nathan and sons Alex, Harry, Max, and Milton, whose Brooklyn firm is known as the Independent Halvah and Candies, Inc., said to be the world’s largest makers of the Oriental confection…

Halvah-maker Nathan Radutzky came to New York from Russia in 1906, taking a job as a halvah-maker’s assistant. Soon he had his own kitchen and today has the largest and most modern halvah factory in the world. Hoping to distribute the product to all parts of the United States, the firm asked the help of the American Can Company in developing a vacuum pack. This fall, tinned halvah in 12-ounce containers, opening with key, having passed all manner of rigid tests, is pronounced ready for sale…

The firm makes three kinds of halvah: vanilla, chocolate, and a [blend] of the two flavors combined. They also make 4 ½-ounce halvah bars, chocolate-covered, and now comes the new vacuum pack which will be selling in delicacy scores across the country. Or you can get three tins, one of each kind, for ＄1.39 postpaid direct from the factory, 47 Varick Avenue, Brooklyn 6, New York.” — Paddleford, Clementine (1898 – 1967). Food Flashes Column. Gourmet Magazine. March 1950.

This web site generates income from affiliated links and ads at no cost to you to fund continued research · Information on this site is Copyright © 2022· Feel free to cite correctly, but copying whole pages for your website is content theft and will be DCMA'd.
Tagged With: Indian Food, Jewish Food, Sesame Seeds