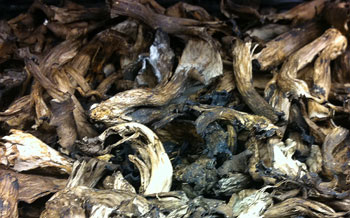 Horn of Plenty Mushrooms grow in large groups in the wild in damp places in the woods. The cap turns up so that the mushroom is shaped like a horn. The outside of the “horn” is charcoal grey; inside, it is very dark brown.

The mushroom looks quite scary, but is a good mushroom and is highly sought-after for its very rich taste. They are usually dried for storage and use as a flavouring agent.

There are a few different species of mushrooms very similar to each other but all lumped together under this name as they are so similar. The species whose scientific name is “Craterellus cinereus” is deemed by some to be superior and to be the true one.

This mushroom has three other names: Black Chanterelle, Trumpet of Death, and Black Trumpet. It is not really a Chanterelle, though: it is just a close cousin, and is grouped informally with Chanterelles owing to its shape. Nor is it dangerous, despite one of its names being “Trumpet of Death.” Some people regard and classify “Black Trumpets” as a different mushroom completely [1] , though again admit it is interchangeable in usage and taste.

Horn of Plenty Mushrooms will darken anything else you cook it with, unless you add them at the end. The dried mushroom can also be powdered and used as a seasoning.

[1] “Based on DNA studies, some mycologists are no longer convinced that there are two distinct biological species here—but many who have studied these and the related chanterelles a lot, myself included, do. I find two distinct forms: One (which I regard as the Black Trumpet, C. fallax) is gray to black, very scaly on the inner surface, fairly fragile, and produces pinkish-tinged spore prints; the other (the Horn of Plenty, C. cornucopioides) is consistently brown, not markedly scaly, fairly elastic, and produces unpigmented white spores. Also, darker specimens of C. fallax appear almost blue on the outer spore-producing surface—a feature which often seems exaggerated by photography—and it is typically more robust, with thicker flesh near the base.” — Fischer, David. American Mushrooms. Retrieved February 2013 from http://americanmushrooms.com/edibles7.htm

This web site generates income from affiliated links and ads at no cost to you to fund continued research · Information on this site is Copyright © 2021· Feel free to cite correctly, but copying whole pages for your website is content theft and will be DCMA'd.
Tagged With: Chanterelle Mushrooms