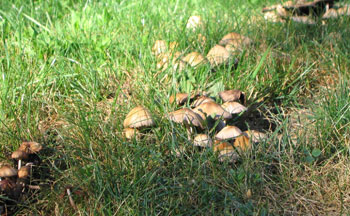 There’s a saying in German: “Alle Pilze sind eßbar! Manche Sorten kann mann allerdings nur einmal in Leben essen.” (All mushrooms are edible – it’s just that some kinds you can only eat once in your life.)

Don’t try to collect Wild Mushrooms yourself unless you are or go with a knowledgeable, trained guide. You can’t rely on pictures in books, descriptions on web sites such as this, or even spore prints, because some mushrooms are so similar when grown, and even if they aren’t, they can resemble each other at varying growing stages along the way. Do not rely on descriptions of any Wild Mushrooms provided on this or any other Internet site.

You can’t go by looks. Many of the dangerous looking ones, such as Morels, are completely safe. Many of the safest looking ones, such as many in the Amanita family, are highly poisonous. Some, like the Destroying Angel, reputedly even taste fine — but the taste is the kiss of death. And remember, just because one person doesn’t react to a mushroom, doesn’t mean you won’t. And just because you didn’t react to it this time, doesn’t mean you won’t react to it next time.

If you really are interested, join a mycological (mushroom) society.

Many mushrooms sold in stores are Wild Mushrooms, but that’s because we haven’t figured out how to cultivate them yet, or if they can ever be cultivated outside of the eco-systems they are part of. The mushrooms brought to stores are gathered by very experienced mushroom collectors — with good insurance.

Wild Mushroom enthusiasts slag the mushrooms sold in stores as boring. The stores, though, aren’t going to sell a particular food item, mushrooms included, unless they are sure that most of the population (aside from food allergies) can eat it without dying — they don’t want the lawsuit and a jail term. Besides, just how boring does your life have to be before you see a brightly-coloured fungus growing on the side of a tree and you say to yourself, gee, I think I’ll just hack that fungus off the tree and chomp into it? Do you really want to appear on next year’s Darwin Awards list?

Many Wild Mushrooms themselves are, as the French would say, “comestible, mais peu engageant” (edible but hardly interesting.) And the ones that might be interesting can have bugs or maggots in them quite frequently.

Examine the undersides of Wild Mushroom caps for worm holes. If there’s a lot, just pitch the mushroom completely. If there’s just a few, then chop away those parts.

It’s a myth that just a nibble of a mushroom can’t hurt you. The idea goes, just take a nibble and see how you feel the next day. Some mushrooms are so poisonous that the merest nibble can equal a kidney transplant for you, and if you survive the operation, the poison might still kill you anyway. And don’t believe any of the old wives’ myths about how to tell if a mushroom is poisonous or not — if half an onion changes colour when boiled in water with the mushroom, if the mushroom changes colour when cut by a silver knife, if squirrels appear to be nibbling on them must be safe, etc.