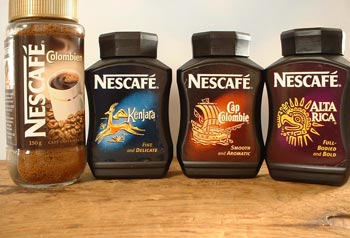 Instant Coffee is a form of coffee essence. Usually, it comes in the form of dried powder or granules, to which you add boiling water to create a coffee-like beverage.

It is convenient, easy to make, and depending on the brand, can be cheap.

All you need is a heat source to boil water, something to boil it in, a cup and a spoon (you can even manage without the spoon, if need be.) If you have a microwave, the cup can even become the vessel in which the water is boiled.

To make it you boil water, measure the Instant Coffee into your cup (by spoon or eye-balling it), add hot water and stir.

The process of making Instant Coffee starts with ground coffee beans. A very strong, concentrated coffee is brewed from them, then the liquid has the moisture removed by freeze-drying, or by spray-drying to leave just the solids. The spray-drying involves finely misting the coffee into very hot, dry air, causing the water in it to evaporate instantaneously, and the solid to fall to a surface for collection (the same process is sometimes used in making instant powdered milk.)

For freeze-drying the coffee is frozen, then placed in a vacuum, which causes the water to vaporize. Freeze-drying is considered the superior way to retain many of the essential flavour notes of the coffee, but the resulting product is more expensive.

Either way, a powder is left. A clumping agent is added to cause the powder to form granules. When jarred, a blast of “coffee smell” is added to the jar, so that it wafts out when the jar is opened by the consumer. However, the smell does not permeate the granules, or last.

Instant Coffee is sold in granules rather than a cube or block because granules mean more surface area, which means it dissolves much more quickly because the water to dissolve the coffee can only get at it from the outside.

Instant Coffee is sold to restaurants in tins, jars and sachets, and to consumers in bottles.

In North America, Instant Coffee is looked on as a “white trash” product. Saying that someone “drinks Instant Coffee” is a knowing way of dismissing pretty much everything about a particular person’s tastes. North American foodie minds are closed on the topic, no matter what’s happening or is available in the rest of the world. It’s a matter of self-esteem for them, that the question of Instant Coffee won’t even enter into the range of things considered in their lives.

But yet, in North America, somebody’s buying it. Even at stores in ritzy neighbourhoods, Instant Coffee is there on the shelves, and as of 2006, 40,000 US tons a year of it are still sold in America.

In Germany, 14,000 US tons of Instant Coffee are sold a year, and the same people who buy it also regularly drink brewed coffee.

As of 2005, 90% of the coffee drunk in the UK was Instant Coffee. While North Americans might smirk when hearing this and say, of course, it’s the Brits, what the Brits drink is a different league of instant that isn’t even available in North America, and the Brits are accompanied by other cultures generally considered to have better “food taste” than Americans are known for: 60% of people in France and 68% of people in Spain drink instant regularly as well.

Nescafé brands are the most popular in France, but another top-selling Instant Coffee brand in France is “Carte Noire”, created in 1978 by René Monnier from all Arabica beans (it’s actually made in Germany.) It comes in glamorous black and gold bottles, has a strong, deep roasted flavour, and is somewhat less strong than some of the Nescafé brands such as Alta Rica.

European premium Instant Coffees are often more expensive to make per cup than it is to make regularly brewed coffee.

Never substitute regular ground coffee when a recipe calls for instant granules to be stirred in.

1901 — Satori Kato introduced Instant Coffee at the Pan American Exposition in Buffalo, New York State. He was a Japanese-American chemist living in Chicago. Applied for a American patent in 1901, received it in 1903. He formed the Kato Coffee Company Inc. in Chicago.

1906 — The English chemist “George Constant Washington” creates what he calls “a refined soluble coffee.” He got the idea from when he was living in Guatemala, and saw dried coffee deposits on the lip of his silver coffee pot. He began making and marketing in 1909 an Instant Coffee he called “Red E Coffee” — later, he marketed it as George Washington Instant Coffee.

Soon there were other brands on the market, such as Faust Instant Coffee (made by C.F. Blanke Tea & Coffee Co. of St Louis, USA) and Fairy Brand.

Instant Coffee was sent with American troops over to Europe during the First World War.

A method of spray drying was perfected in 1937 by a scientist named Max Mortgenthaler. He also added carbohydrates to help “stabilize” the coffee. Nestlé launched their Instant Coffee in Switzerland on 1 April 1938. They began making it in Hayes, West London in 1938 as well (some sources say a year later, 1939.)

The brand name “Nescafé” was formed from a combination of “Nestlé” and “café” (French for “coffee”.)

During World War Two, the output of its American plant was dedicated to military consumption only. As a result, the taste of Nescafé Instant Coffee became what soldiers thought of what they thought of coffee, even after they returned home.

“We have the Instant Coffee. No grounds, no trouble. Just hot water and it is ready.” — Advertisement placed by L.W. Newton in the Wichita Daily Times. Wichita Falls, Texas. Monday, 30 November 1914. Page 6.

“Free Demonstration. ALL WEEK OF Fairy Instant Coffee AND Fairy Instant Tea. A Delicious Drink, Quickly and Easily Made. Cup Coffee Free: While down shopping stop in and try a cup. Mrs. Ammann, who has charge of the demonstration, will be glad to serve you with a cup of Instant Coffee or tea.” — L.D. Barber grocery store advertisement. in The Decatur Review. Decatur, Illinois. Wednesday, 12 May 1915. Evening edition. Page 10.

“We want you to become well acquainted with the FAUST INSTANT idea. We want you to learn how to make your coffee and tea in the cup — by simply adding boiling water to a pinch of instantly soluble powder.” — Advertisement in The Kansas City Star. Kansas City, Missouri. Friday, 10 September 1920. Page 10.

“Soluble coffee’s rush into market began early in June, immediately after the War Food Administration lifted the lid on soluble coffee production by returning to civilians the 100 per cent set-aside order, This type of coffee was known as early as 1910 but it was 1930 before it began to catch on. Then the war came and the government took over the pack…

One of the newest arrivals of the filled type is the Maxwell House Instant. This coffee was first developed for war use, a good beverage but not good enough, the company felt, to carry the Maxwell House label in the consumer market. Its war service ended, the company began experimenting to see if it could be made to approximate their regular Maxwell blend in flavor and aroma. All the research facilities of the firm were put to work on the job. By the addition of the carbohydrates the original Maxwell flavor was achieved. To get the aroma, that was the problem. This eventually was captured to a certain degree and put under control. It doesn’t meet the full test as against coffee made of the freshly roasted ground bean but good enough, the firm feels, to carry their famous trade-mark…

The four-ounce jars yield approximately the same number of cups as a pound of the regular and at about the same price, 29 to 36 cents. The product is selling in both chains and independent stores and will be in national distribution by the first of the year.” — Paddleford, Clementine (1898 – 1967). Food Flashes Column. Gourmet Magazine. November 1945.