A coffee tree is an evergreen tree that can grow up to 9 metres (30 feet) tall, but it is kept shorter by pruning it into bushes to make it easier to pick the beans.

The bushes produce white blossoms that only last a few days, and then berries like very small, red cherries. Each berry has two seeds in it. The seeds are flat on one side, round on the other, with a line dividing them in half.

Coffee can be classed as a fermented food:

“The fermentation of coffee takes place when the seed (bean) is still in the coffee fruit ‘cherry’. The cherries are collected and before the separation of the seed (green coffee) there is a short fermentation which can be wet (in water) or dry. Basically, the cherry is broken and the pulp is left in contact with the seed. The sugars contained are fermented mainly by yeasts.” [1]The Human Microbiome. Universita degli studi di Torino. Micro course. Step 2.25 FAQ. Accessed July 2022 at https://www.futurelearn.com/courses/the-human-microbiome/4/steps/1429080

The outer pulp of the berry is removed by machine. Some Africans use the pulp to make wine from. A thin skin covering the seeds has then to be removed before roasting.

The longer the coffee beans are roasted, the darker they will be and the stronger they will taste. Coffee beans usually come in light, medium and dark roast. That being said, such generic terms are usually replaced by marketing terms, so that you will see instead a particular roast of coffee beans being called “Vienna Roast” or “Full City Roast.”

The length of steeping time affects not just the strength of the taste of coffee, but also the breadth and complexity of the taste.

You can extract different flavours from coffee by putting it in a sieve, setting up five cups, and pouring 100 ml (about 3 oz) of boiling water through the coffee in the sieve into each cup, one after the other, taking 30 seconds for each pour.

Each cup when tasted should reveal different tastes such as below.


At the end of the procedure, combine all the cups together in a large enough cup to hold them, and taste. A more well-rounded and complex taste should come through.

Freeze left over coffee in ice cube trays, then when frozen pop into freezer bags. Thaw a few cubes whenever you need a small amount of coffee to flavour sauces, icings, cakes, etc.

Coffee is probably native to Abyssinia, now Ethiopia. It was known there around 700 AD. There is no hard evidence, though, as to how or when coffee was first discovered as a drink.

By the 800s, the Arabs were boiling the beans to make a drink they called “qahwa”. It was popular right away with the Muslims, as they were forbidden to have alcohol. Though it wasn’t quite an exact substitute — while wine can make you sleep, the Arabs knew about the properties of coffee. Their word for it, “qahwa”, meant “keeps you awake”. The roasting of the beans probably didn’t start until somewhere between 1000 and 1200 AD. Muslims took coffee and coffee plants everywhere they went. To control the trade, they made sure that all beans had been roasted first, making the beans useless for planting. By the 1500s, coffee was a standard drink through the Arabic world.

The first commercial shipment of beans to arrive in Europe was in Venice in 1615.

In May 1637, John Evelyn noted that at Balliol College, Oxford, a student from Crete, Nathaniel Conopios, prepared and served coffee to guests.

In 1690, the Dutch broke the Arab monopoly by smuggling a live coffee plant from the Arab world and planting it in Java.

The Espresso machine was invented in 1822 by Louis Bernard Rabaut.

Decaffeinated Coffee was invented by a German man named Ludwig Roselius in 1903. Sanka came on the market in the US in 1923 (Sanka is derived from the French “sans caffeine”).

Instant Coffee was invented by an Englishman named George Constant Washington, and put on the market as “Red E Coffee” in 1909. In the 1920s, companies begin promoting pre-roasted, pre-ground coffee for its convenience to housewives. In 1938, Nestlé invented freeze-dried coffee, and introduced it in Switzerland.

The British people’s tea consumption went down during the rationing of the Second World War, and when rations were lifted in 1952, they didn’t go back to tea in great numbers — they switched instead to the American preference for coffee.

Italians consider it the height of bad taste to drink a cappuccino after 11 in the morning. You will get away with it in North America and in the UK, where we don’t know any better, but you if go to Italy, consider yourself forewarned if you want to avoid scandalized looks from barmen and other people.

“Coffee reheated gives an evil cooking liquid that might have been brewed out of the Dead Sea after a recipe left by the Witch of Endor.” — Clementine Paddleford (American food writer. 27 September 1898 – 13 November 1967)

Coffee was popular as a street food in nineteenth-century London:

“‘After getting up in the dark and the cold’, wrote Thomas Wright, an ex-labouring man, ‘the gleam from the hot-coffee stall comes like a guiding star…. Here you get warmth to your hands on the outside of the cup, and for the inner man from the liquid, which you get piping hot, for the proprietors of the stalls are aware than that quality is regarded by their morning customers before strength or sweetness.’ These stalls mostly appeared at the edges of the city and in the centre, with fewer in the suburbs: in Camberwell, in the late 1850s, one memoirist says that there were ‘street refreshment stalls at night in some localities, but I never saw one.’ On the major routes, however, these stalls were everywhere, ranging from the simplest makeshifts to elaborate structures. Some consisted of a board laid over a pair of sawhorses, a can of coffee kept hot by a charcoal burner, and a few plates of bread and butter; if the owner could manage a blanket over a clothes horse to protect a bench from the wind, all the better. Others were more robust. The journalist George August Sala described one Covent Garden stall as ‘something between a gipsy”s tent ana a watchman’s box’. At Islington, a regular coffee stall by a pub was erected nightly: out of a hand-barrow came benches, a table and ‘a great bright tin boiler with a brass tap’, heated by a coke fire, and all enclosed in a cosy canvas tent. A lamp was lit, the table was covered with a cloth and laid with cups, saucers, a loaf and a cake, and in fifteen minutes a snug little booth was ready for customers. Who the customers were, and which the busy times, varied by location and cost. A cup of coffee and ‘two thin’ — two thin pieces of bread and butter — was a penny in the West End and City; around the docks, where the customers were entirely working class, it was half that….

The journalist James Greenwood spent a night with a coffee-stall holder in Islington, watching the customers come and go. The stall was set up at 11:30 [Ed: pm], just as the tavern near by was closing. In the first hour there were only two paying customers, a night cabman and ‘an unfortunate’ (unfortunate – the standard polite term for a prostitute), plus a beggar. Then came a blind boy who sang in pubs and his father, four street-sweepers and three ‘tipsy gents’. From 1:30 to 2:30 am, a number of men dropped by to sober up; then the ‘very worst sort of customers’ appeared: those who had nowhere to sleep, and eked out halfpenny cups of coffee by the charcoal fire for as long as they could… Between 2:30 and 3:30, three more unfortunates stopped by, and two labourers asking the way to the Uxbridge road….. by 3:30 the cattle-drovers began to arrive, filling the space with their dogs, ‘which makes it uncomfortable’… from then it was more prostitutes until around five, when the daily workers arrived.” Flanders, Judith. The Victorian City. London: Atlantic Books. 2012. Page 24-25, talking about London in the mid 1800s.

The English word “coffee” is derived either from Kaffa, a province in South-Western Ethiopia where the plant may have originated, or from the Arabic word “qahwa”, meaning “keeps you awake”.

Camp Coffee is a black, concentrated coffee-flavoured syrup sold in the UK and in Canada. The syrup is 26 percent chicory root, 4 percent coffee, and sugar and water. It is made by McCormick Foods in Paisley, Renfrewshire, Scotland. Camp Coffee...

Civet Coffee may be the world's most expensive coffee, coming in at about $200 a pound (2010 prices.) Only about half a tonne is produced each year. To some, the flavour of Civet Coffee is rich and sweet, with undertones of molasses and tobacco. To others,...

Espresso is a strong, somewhat bitter version of brewed coffee made from dark-roasted coffee beans. Visually, it is noted for being served in small 2 oz (60 ml) cups, and for the thin patches of caramel-coloured "foam" on top, referred to as the...

Caffè Crema is a very "long" espresso, with more water in it than Caffè Lungo. That is to say, about 180 ml to 240 ml of water is allowed to pass through the filter basket, instead of the normal 25ml for an espresso. So that's almost up to about t...

Cappuccino, side view© Denzil Green Cappuccino is an Italian milky coffee drink, made from espresso coffee and hot milk, topped with a generous amount of foamed milk with very fine bubbles in it. It often has a small amount of sugar added to it ...

Instant Coffee is a form of coffee essence. Usually, it comes in the form of dried powder or granules, to which you add boiling water to create a coffee-like beverage. It is convenient, easy to make, and depending on the brand, can be cheap. All... 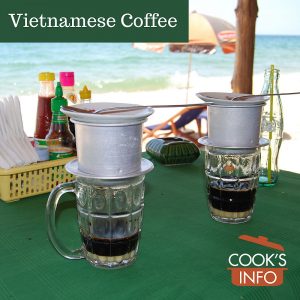 Vietnamese coffee is a thick, strong coffee. It is always served with sweetened condensed milk. It may be served hot, or over ice.