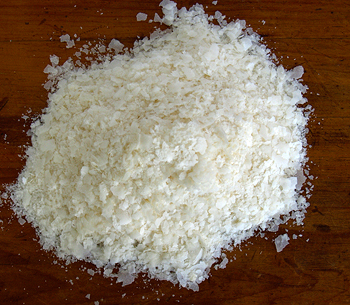 Instant Mashed Potatoes are good for people who are either living in very small spaces and can’t store bags of potatoes, or who live in spaces too warm for potatoes to last long, who don’t have easy transportation to and from grocery stores to carry heavy bags of potatoes along with all their other groceries, or who live alone and find that fresh potatoes always go bad on them before they have a chance to use them. Many people will cook up instant for themselves or family, but would never serve them to guests.

Not all Instant Potato comes in flake form — there is a brand called “Potato Pearls” (sold industrially in North America and to consumers in the UK) that has the Instant Potato in small pearl-shaped granules instead.

To make Instant Mashed Potatoes, potatoes have the skin steamed off them. Then the potatoes are cut up, briefly blanched in water, then cooled. To make granules, they are boiled to a mash and then mixed with previously dried potatoes, and flash-dried. To make flakes, they are sprayed in a film onto a rotating drum to be dried.

When granules are being made, the potatoes used are usually those too small to be graded or that are otherwise rejected, but are still perfectly good. For flakes, what’s often used is the “waste” parts of potatoes left over from making potato chips, which is to say the pieces that aren’t the right shape to make potato chips out of.

Despite the “instancy”, there seems to be an art or a knack that some people have to making them always come out perfect. For some people, the potato often turns out runny when they follow directions exactly, and to compensate they have to add more flake that never gets completely dissolved in. Or they come out like paste.

Don’t add the flakes all at once. Add them a bit at a time, and stir them in. This allows the flakes time to absorb water, swell up and get fluffy. Take off the heat the pan in which you boiled the water and/or milk before starting to add the Instant Mashed.

The RT French Company (of French’s mustard fame) in Idaho began making Instant Mashed Potato granules in 1952. They introduced the granules commercially in 1955. Dr Edward Anton Asselbergs (1927 – June 1996) developed a process for making flakes, instead of granules. He was working for Agriculture Canada at the time.

Some archaeologists feel that in fact, the Incas were the first: they crushed Potatoes, dried them into a powder for storage, then would mix with hot water and seasonings to eat.

This web site generates income from affiliated links and ads at no cost to you to fund continued research · Information on this site is Copyright © 2022· Feel free to cite correctly, but copying whole pages for your website is content theft and will be DCMA'd.
Tagged With: American Food, Potatoes