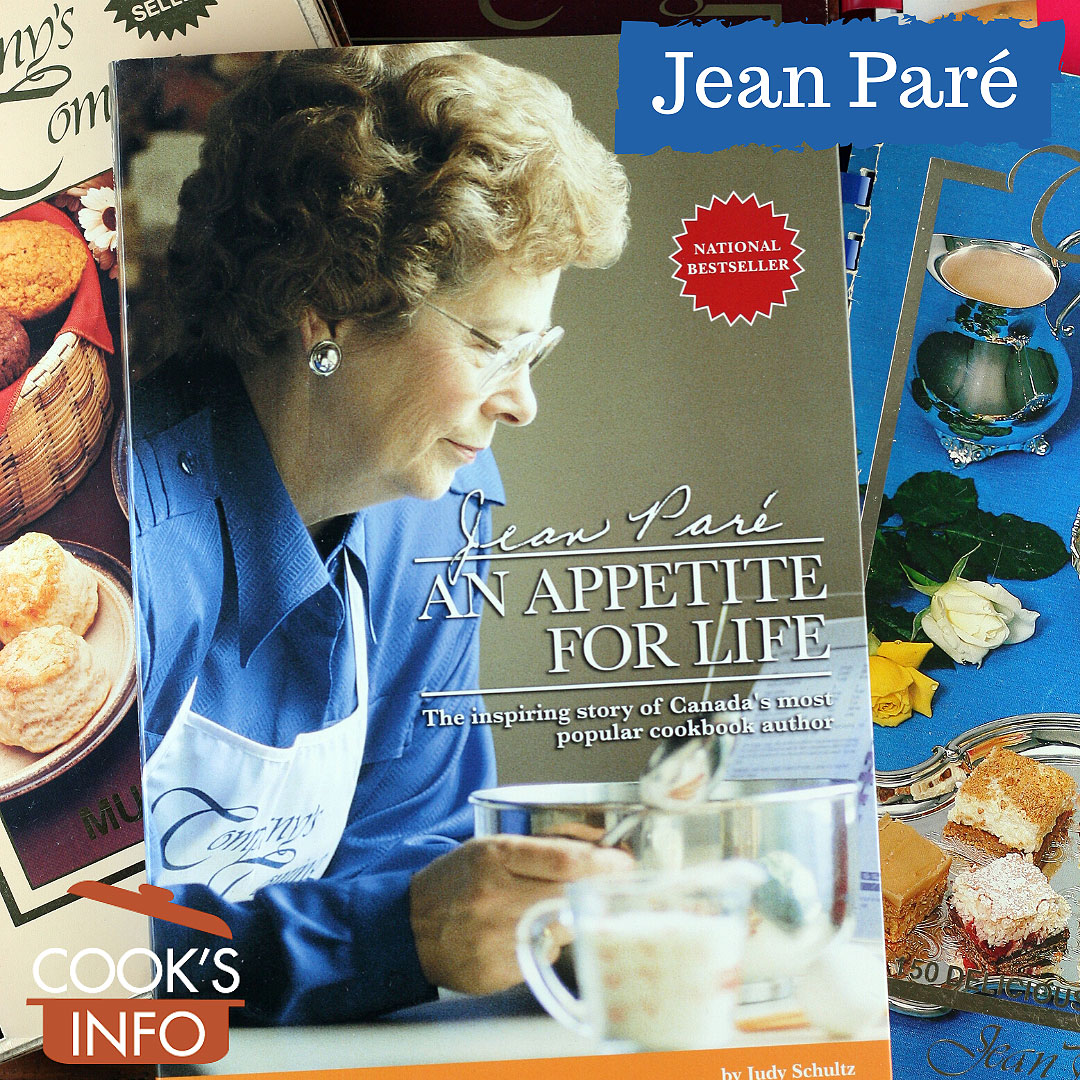 The core of her books remained homecooking, though she branched out in the late 1900s to include the new foods becoming common in North America at the time (while still sticking to her principle that her recipes should only call for ingredients that people could easily get at their neighbourhood supermarkets.) At a public reading she once gave, someone in the audience complained that some of her recipes called for tins of mushroom soup (instead of calling for a proper sauce to be made.) Jean responded by starting to give directions on how to make a mushroom sauce from scratch. The audience member interrupted her and sputtered, “I’d never have time for that.” “Exactly,” Jean replied. 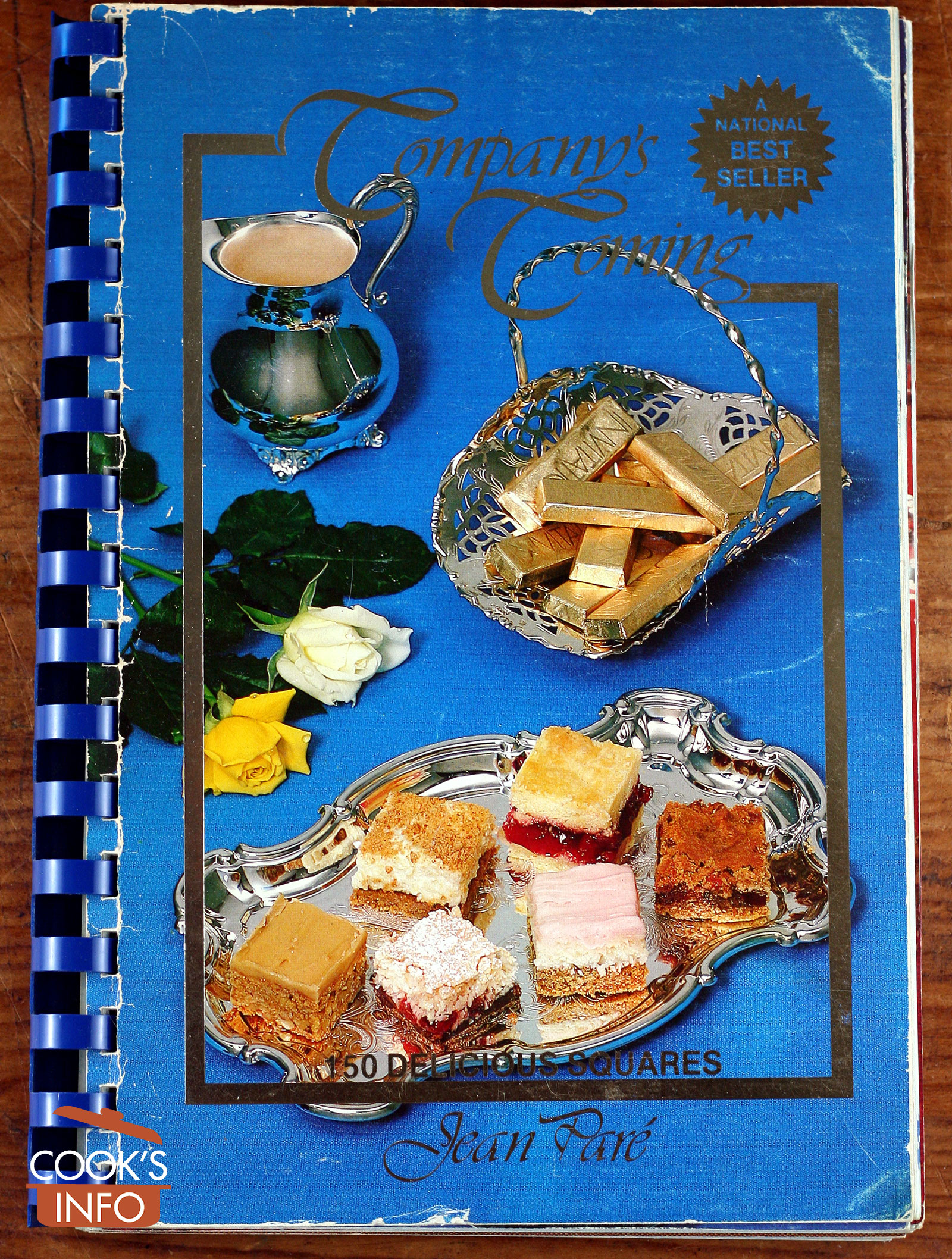 Jean’s books provide a realistic record of Canadian cooking in the 20th century, reaching from couscous and curry at the end of the century back to what farm women cooked at the start of it. Her cooking knowledge comes from a time before refrigeration, when in making a pie, how long you planned to have it around the house determined whether you would make a top crust pie: double-crust pies were better keepers, and fruit pies beat cream pies hands down by staying good for up to four days on a shelf in the back porch. [3]Schultz, Judy. Jean Paré: An Appetite for Life. Edmonton, Alberta: Company’s Company Publishing Limited. 2006. Pp 7-8. Some of her books have their foundations in the fancy occasions in small-town Canada, where desserts were oodles of squares, arrayed on three and four tray stands, to be served with coffee and tea in the good china cups, with everyone having donned both their Sunday clothes and manners.

While other Canadian writers were teaching people about cooking in other lands, Jean re-taught new generations how to make molasses snaps, hermits, brown betty, strawberry jam and baking powder biscuits. She was the small-town, practical voice in the kitchen, unabashedly giving advice on how to “doctor up” tins of bought baked beans to make them your own.

One of her favourite smells was that of old-time Canada, the smell of chow-chow simmering on the stove during canning time (chow-chow though is not a tradition in the western part of Canada where she lived; this may have been brought there from east-coast Canada by her mother’s parents. ) She was not a fanatical purist, though: she had no problem eating at McDonald’s, where her favourite food was a Chicken McGrill (she also liked their pizza but they only carried it for a few years.)

In many ways, her tastes, likes and dislikes remained those of many North Americans of her era. She was raised a teetotaller, and didn’t have her first alcoholic drink until she was thirty-three. She never allowed her kids to swear for any reason. She didn’t like shrimp; they reminded her of cutworms from the front lawn. She didn’t hold with any of the now-fashionable trendiness about fiddleheads, and wouldn’t touch them. She thoughts oysters were slimy and that mussels looked like “chicken lungs”, and wouldn’t touch offal. She didn’t like undercooked vegetables. “I want my vegetables cooked… I never liked those barely warm carrots crunching in my teeth.” [4]Schultz, Judy. Jean Paré: An Appetite for Life. Edmonton, Alberta: Company’s Company Publishing Limited. 2006. Page 68. She didn’t believe in rare beef. She cooked it all in a low-temperature oven for a long time in a roaster that had a lid on it, “to avoid oven splatter” and clean-up. She dismissed escargot, saying that anything cooked in that sauce, even a mouse, would taste good. However, she included escargot in her Appetizers book at the urging of her children, though she made them do the taste-testing.

She had a sweet tooth, and liked jellied salads. On planes, when the meal came, she always ate the dessert first. A working mother, she never had anything against cake mixes, and in fact lamented that Betty Crocker only made its chiffon cake mix for a few years. She owned that it came close to being as good as hers.

Jean never accepted requests to judge cooking contests. It’s not that she was a snob about amateur recipes: in fact, she considered the real cooks in North America to be the women who are now disparaged — the ones who sent their recipes into the church, community and Junior League cookbooks. But she thought she’d make a lousy cooking contest judge because, she said, “If it was chocolate, it would automatically win.” She never kept her recipes secret, and believed in recipe sharing both ways, but she would never pass on a recipe before trying it herself and knowing it was good enough that she would make it again. Julia Child’s recipes were always far too fancy for her, but she did share common ground with Julia on their common dislike of cilantro.

When travelling somewhere only for the food, her favourite destination was New Orleans, followed closely by London. 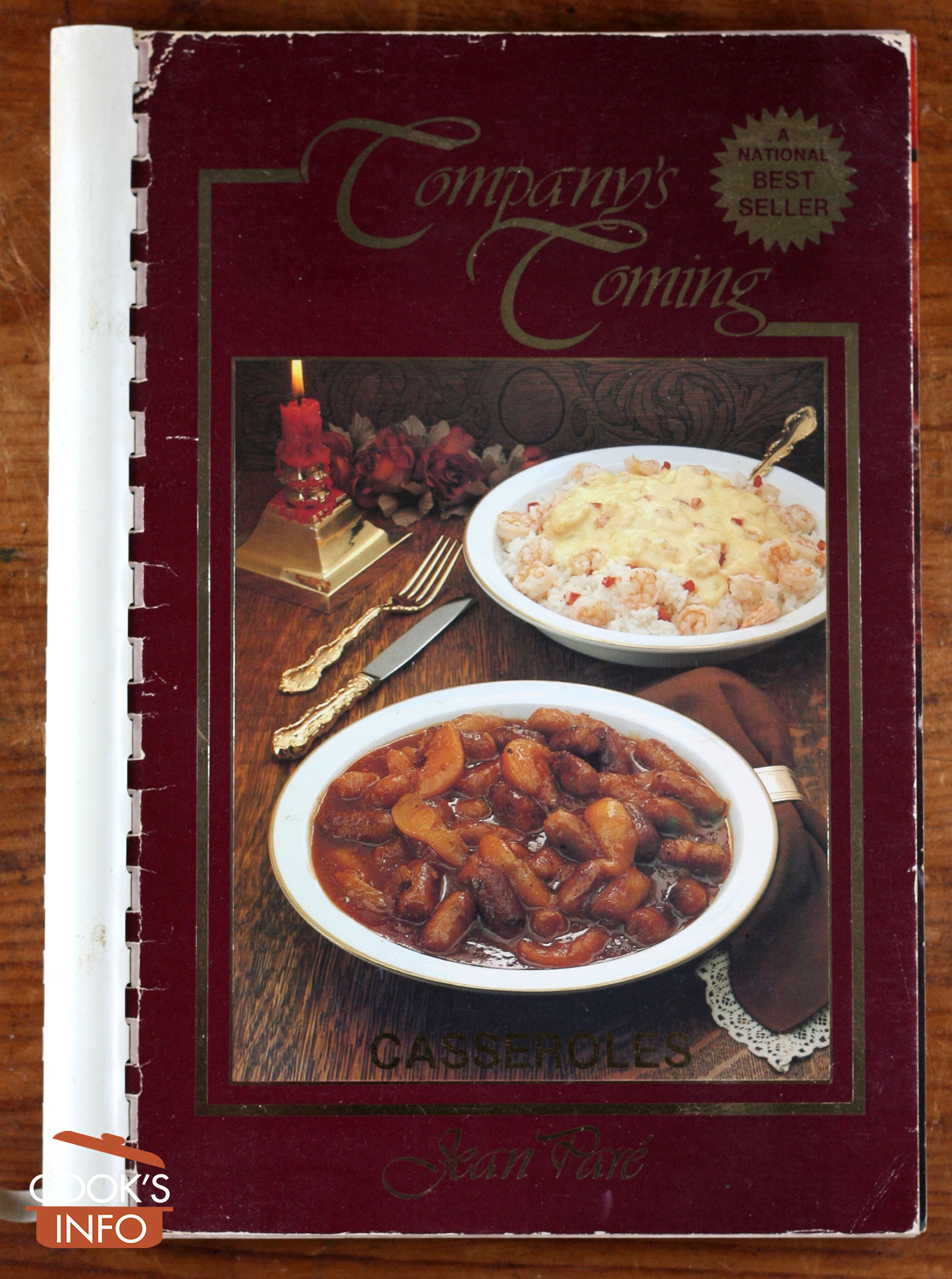 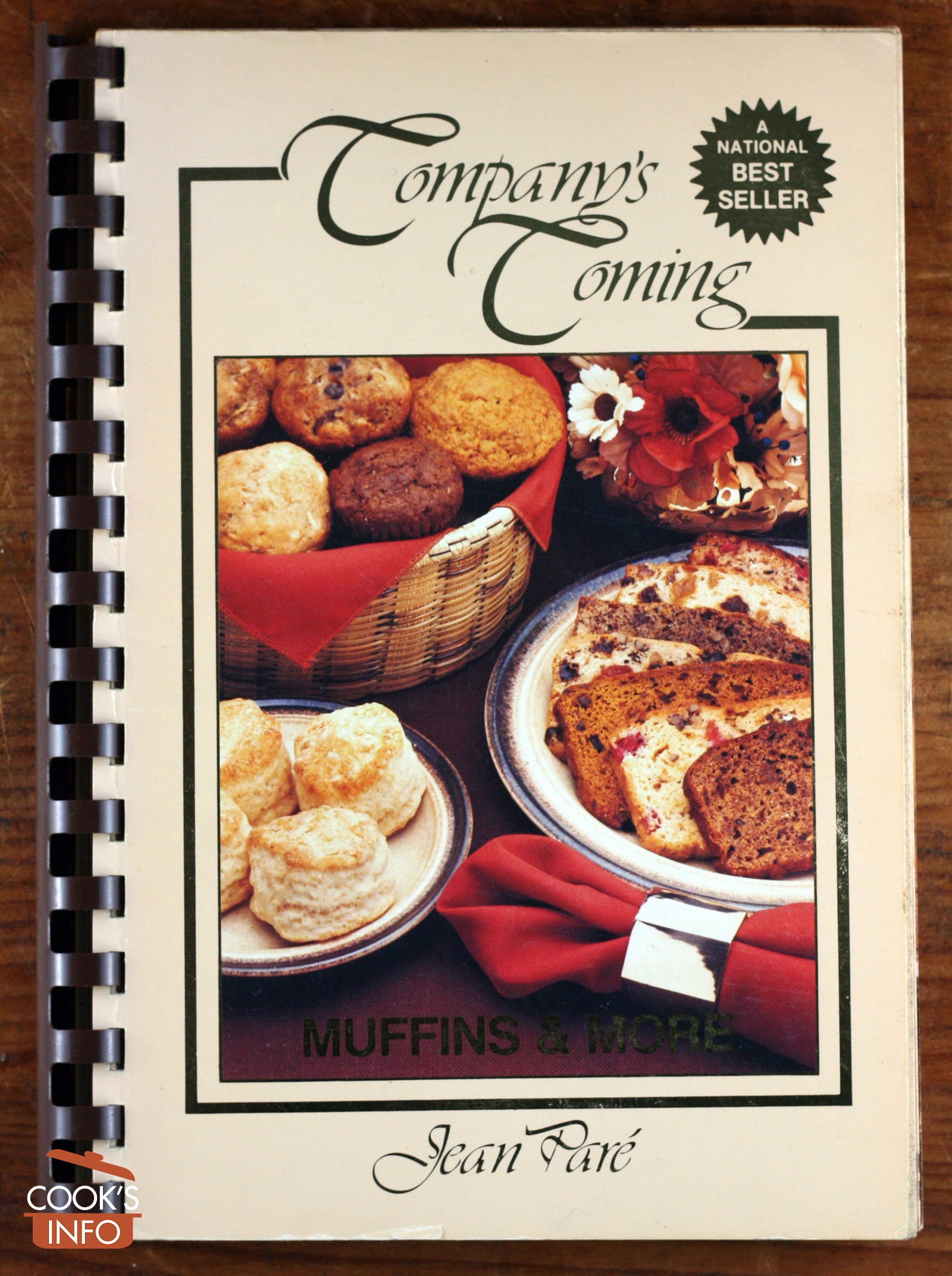 The menu from Jean’s first large catering job in 1963 provides a window into North American life in the early 1960s.

The three core items on the menu were turkey, ham and potato salad.

Jean had all carving of the turkey done in the kitchen so people couldn’t hold up the serving line by fussing over what kind of piece they wanted. She arranged the buffet bales so that there were 12 serving lines for food, at a time when no one had ever used more than 2 lines. For all of the above, she charged $1.25 a plate.

Jean would continue her catering business until 1981, when the success of her first cookbook would demand her full attention. She invested in a commercial fridge, and had a second stove put in her garage. She got a fishing tackle box and stocked it with catering essentials such as pickle forks, sugar tongs, bottle openers, serving spoons, etc.

Her catering principle was “never run out of food.” She always kept a few spare gallons of tomato juice on hand as extra supplies for emergencies, and always served two meats. The only time she was ever off on her food estimate was at a high-school graduation dinner, when the graduation committee forgot to include the actual grads in the numbers they had given her.

After the first event (with the ice cream served in Dixie Cups), she came to insist that dessert had to be special, something that required a fork to eat it with. For desserts around Christmas time, she’d serve plum pudding with a sauce, mince tarts, shortbread and some kinds of squares (she made her squares in October and froze them un-iced.)

Jean always threw in something extra for her clients that they weren’t expecting as a bonus, such as a tray of sliced fruit or a bean salad or a coleslaw.

She always firmly insisted that any beef she served was going to be well-done; she said it was too much fuss trying to deliver roast beef in any other way. She would serve pit-barbequed beef, though; she had a friend who did it for her. But refused to serve grilled steaks, as she was certain people would mess around asking for them rare, medium, etc., and she didn’t want anyone throwing her timing off.

At one event, she fed Colonel Harland Sanders (founder of KFC.)

CBC. The Recipe for Success: The Life and Times of Jean Paré. Part of CBC Television series called “Life and Times”. Aired 15 October 2002.

This web site generates income from affiliated links and ads at no cost to you to fund continued research · Information on this site is Copyright © 2023· Feel free to cite correctly, but copying whole pages for your website is content theft and will be DCMA'd.
Tagged With: Canadian Food