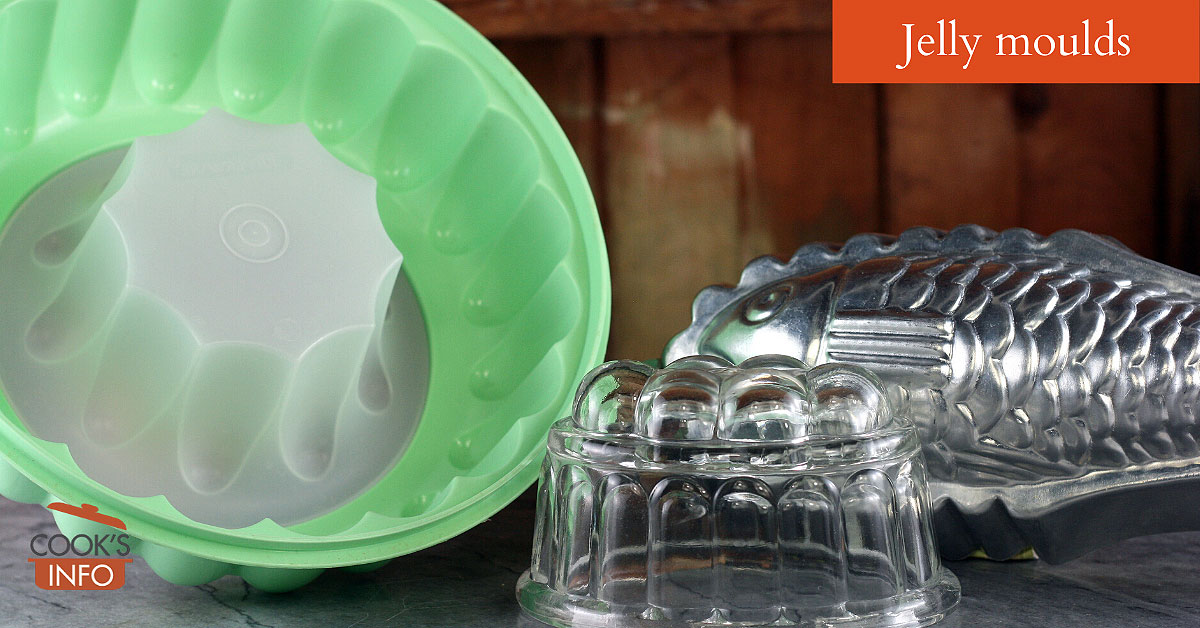 A jelly mould is a tool for shaping gelatin or aspic dishes in. Once set and turned out of the mould, the jelly is meant to retain the shape of the mould. The jelly can be savoury or sweet.

Jelly moulds can be made glass, metal, silicone or plastic. Older ones were made of glass, pewter, tin or copper.

They come in varying sizes and many shapes. The shape is usually meant to reflect whether the jelly is savoury or not, e.g. fish-shaped for savoury, etc.

You can also get them ring-shaped.

Some more modern designs (such as those by Tupperware®) may come in two or three pieces, allowing disassembly in order to more easily free the moulded jelly from the mould.

To make unmoulding easier, you can lightly brush the inside of the mould with oil, or spray it with cooking spray, before pouring the jelly mixture in. You could also, or alternatively, put the set jelly in its mould briefly into a pan or sink of hot water to loosen the edges, then place a plate on top, and invert.

The earliest known jelly mould to date appears to be one from 1730.

On the wall of the kitchen of Ken and Deirdre Barlow on the British television programme “Coronation Street”, viewers were startled by what appeared to be a copper jelly mould in the shape of a penis and testicles. It was in fact a lobster, but eventually it was taken down off the set as the producers reputedly received too many letters of complaint about it from viewers.

Note to American speakers: jelly here means as in gelatin, not “jam“.

‘It is proved by experience that, beyond five or six dozen, oysters certainly cease to be enjoyable.’ — Grimod de la Reyniere (French gastronome. 20 November 1758 – 25 December 1837)