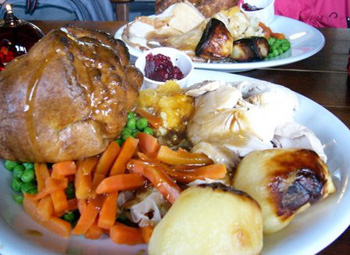 There will always be a debate about what tastes are involved in a savoury dish. Salty, spicy, sour, bitter, sweet, or a combination of these?

The definition of a Savoury Dish has changed over the course of time, and no doubt it will change again in the future. In European cooking from Roman times up to the end of the Renaissance, there was no firm distinction between sweet and savoury, until the development of French cooking which defined sweet ingredients and banished them to the end of a meal. Still, up until the end of the 1700s, it was still not uncommon for sweet foods to be served anytime during a meal.

The Chinese don’t have a concept of a separate sweet course as opposed to a savoury course for a meal. In Chinese cooking, there’s no dessert per se — which is why Chinese restaurants in North America leapt on the idea of serving fortune cookies to customers who expected a dessert. Sweet and savoury together are still the norm in Chinese and middle-eastern cooking, as they were in Roman cooking.

Some spices such as allspice, caraway seed, cinnamon, ground ginger and cloves have been relegated to desserts, though there’s no reason they can’t appear in savoury dishes. In the Middle East, allspice is almost exclusively used in savoury dishes, and in Eastern Europe, it is used in preserving meats. Cinnamon is also used in many savoury Middle Eastern dishes. Some vanilla fans say that it’s great in some savoury dishes.

One tends at first to think of fruit as not belonging to Savoury Dishes, but prunes appears in many Middle-Eastern stews, and raisins are added to some meat dishes in some parts of the world. In North America, pork with applesauce is common, and you’d be hard pressed to get away with not providing a sweet cranberry sauce on the table for Christmas dinner. Wine and cheese is generally regarded as a “savoury snack” to lay out for guests, but grapes, which are normally regarded as a sweet item, are often included. We glaze ham with a sweet sauce, cook it with pineapple, put pineapple on pizzas, and serve goose with red currant jelly. In England, lamb is often served with mint jelly. And Waldorf Salad could almost be served as a dessert.

Almonds were used in savoury dishes in the Middle Ages. Now, they are mostly regarded as a sweet dish ingredient. But some Mortadellas still are made with pistachio nuts in them.

In Asia, glutinous rice (aka sticky rice) could be used in savoury dishes, but they tend to use it more in sweet dishes.

Does one count as a sweet, or a savoury the sorbet served in between courses of a fancy meal?

Soup is almost always a savoury dish. But the Italian word for soup is “zuppa”, and a famous Italian dessert is called “Zuppa Inglese” (“English Soup”), which is a type of trifle.

Savoury Dishes can be served hot, warm, room-temperature or chilled. They can be spicy, moderate or plain.

‘The Galloping Gourmet provides an entertaining half hour, but is about as far away from the Julia Child sort of cooking as Liberace is from Horowitz.’ — Cynthia Lowry (American journalist).