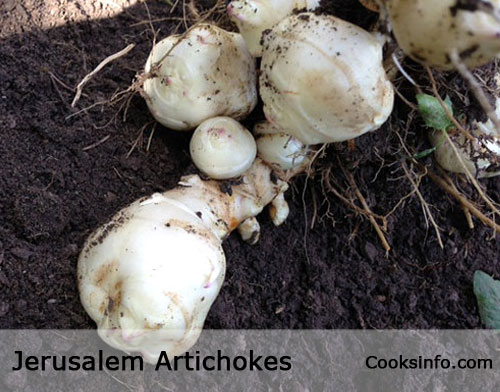 Jerusalem Artichokes (aka “sunchokes”) are root vegetables. They are tubers that look like potatoes with bumpy, gnarly skin.

Their flavour is good, being sweet and nutty.

The plant is a member of the sunflower family, and it looks like it. Above ground, it will grow as tall as sunflowers with leaves almost as large, though the cheery, yellow flowers rarely grow beyond 7.5 cm wide (3 inches.) The plants will regenerate themselves and spread from any tubers left in the ground; they can be hard to get rid of if you miss any in the ground in the fall.

Jerusalem artichokes actually have nothing to do with artichokes: they do not look like artichokes, nor do they, whether raw or cooked, taste anything like artichokes. In this regard, a better name for them is one of their synonyms, “sunchokes.”

The colour of the tubers ranges from creamy to brownish to pinky. Don’t buy any with a greenish tinge, or that are sprouting, shrivelled or that feel mushy.

“This harvest was from two plants. Every year I try to get rid if them, but they always come back! There were a total of about 25 stalks in those clumps, ten large ones about 1″ in diameter and 15 small ones. The small ones only had a few smaller chokes while the big ten were responsible for the larger chokes. Some chokes can grow inches away from their stalks, which is what makes them difficult to harvest. You also can’t go willy-nilly in there with a shovel or you will damage too many of the chokes so I only do a couple big scoops around and then excavate the rest by hand. Took over a hour to get them out but it’s one of the nicest harvests I’ve had – they are all super white, firm, and no grubs or ants.” — Michelle Mattern. 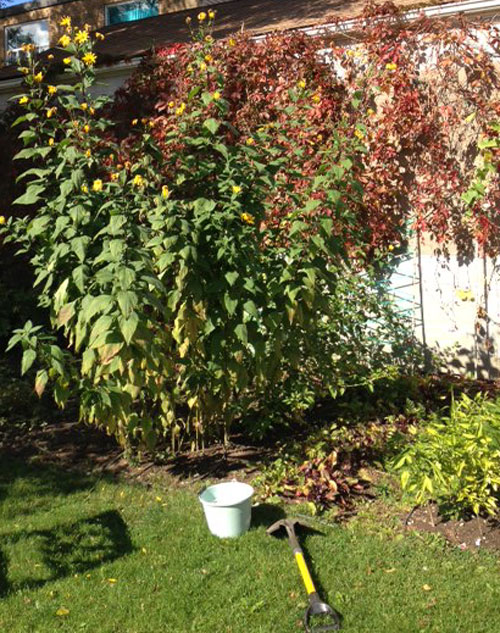 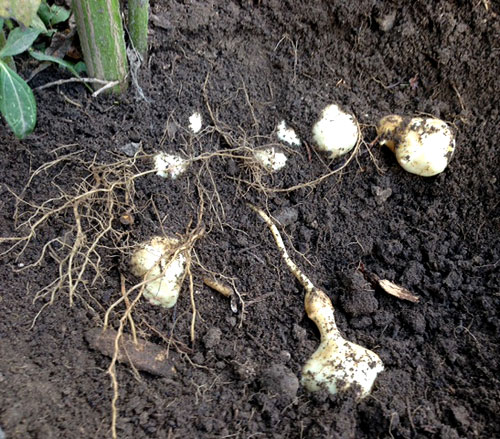 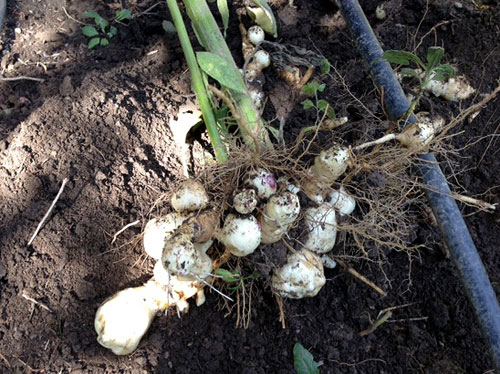 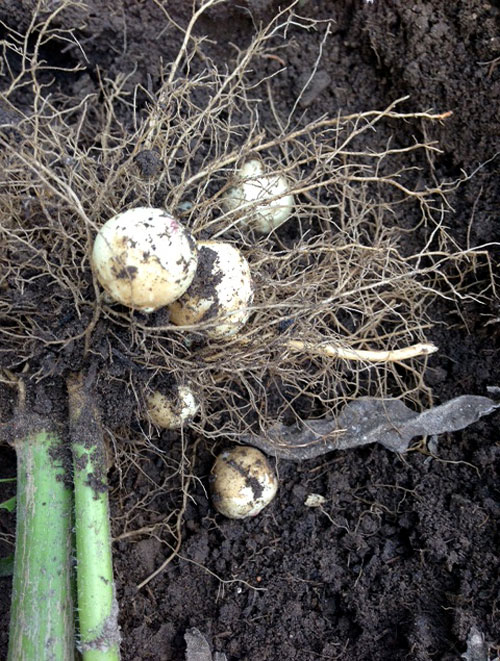 Close-up of tubers with roots on
© Michelle Mattern 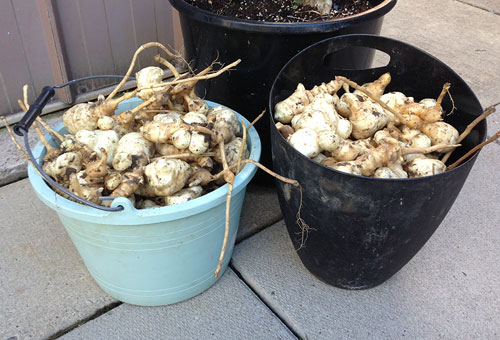 Jerusalem artichokes can be eaten raw or cooked.

Raw, they are a bit sweet, almost like water chestnuts. They will discolour soon after peeling, so if you are slicing them for salads dip in water with some lemon in it.

If boiling your Jerusalem artichokes, don’t overboil them as they will crumble into the water at a certain point. They are easier to peel after cooking; just scrub them well first. The iron in them may cause the skin to darken when cooked, but don’t worry about it, as you are going to peel the skin off and discard it anyway.

Boiled Jerusalem artichokes can be made into a good mash, mixed half and half with another veg — mashed by themselves, they don’t tend to have enough body to peak up, and slide instead into a purée on your plate. For the other veg, try potato, carrot, cauliflower, celery root, turnip, squash, etc.

Jerusalem artichokes contain a form of starch called “inulin”, which is a polysaccharide. The “saccharide” part of that word may ring some bells if you have read the entry on beans, which have “Oligosaccharides”. And that means that Jerusalem artichokes produce gas. In abundance.

The last thing you would want is a bean casserole with Jerusalem artichokes with some kind of sulphur-containing food like onions; your nearest and dearest would lock you in another room.

Store unwashed in a paper bag in the fridge (in the vegetable crisper if possible) for one to two weeks. Refrigeration increases their sweetness. Storage in a plastic bag may increase the chance of mould developing.

In the 1600s, while the Jerusalem Artichoke was first gaining awareness in Europe, you would have had it as a novelty at some Parisian dinner parties. The French at the time called it “pomme de terre”, which is the name they now use for potato.

The Indians in North America, who had grown them for centuries, had called them “sun roots”. The first European to record mention of them was Samuel de Champlain in 1605. He’s the one who thought they tasted like artichokes. He brought them back to France, probably in 1607, along with his opinion about their taste. The French took to them right away, whereas they resisted the potato for a long time. It was probably the association with the word “artichoke”, a lesson marketers are still using today in mislabelling the food.

By the time the French did accept potatoes, however, they had begun to reject Jerusalem Artichokes: a belief had sprung up that its gnarled skin would cause your own skin to go the same way. Meanwhile, they jettisoned any association with the word “artichoke” to call them “topinambours” instead. But it was too late: Champlain’s unhelpful association had already made its way into Italian and English.

They were introduced into Britain by 1617, and were being called “Artichocks of Jerusalem” by 1620.

Its English name is derived from the old Italian name for it, “Girasole (or Girasola) articiocco”. “Gira” means turn, and “sole/sola” is a form of the word “sun”. Being a member of the sunflower family, it was presumed that if allowed to bloom the blooms would turn towards the sun.

The French name, Topinambour, was the name of a Brazilian tribe of natives, some of whom happening to be visiting Paris at the time that Jerusalem artichokes were introduced there.

There is somewhat of a movement to call them “Sunchokes”, but it is doubtful how much headway it will make. When it comes to food, sadly bad names tend to drive out good.