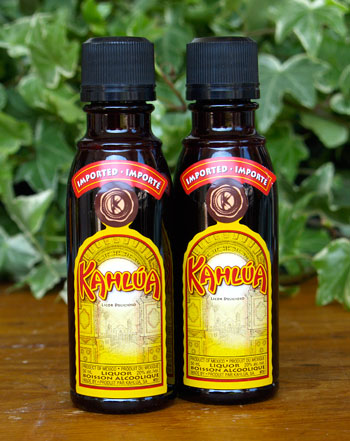 Kahlúa® is a Mexican-made coffee-flavoured liqueur. It is dark brown, thick and very sweet.

Ingredients include coffee, corn syrup, sugar and vanilla bean. Many think there is chocolate in it, but there isn’t.

It comes in various flavours such as Mocha, French Vanilla, Hazelnut, Especial, White Russian, Mudslide, and of course, regular. It can be sipped straight up, used as an ingredient in desserts, as a flavouring for coffee or as a mix in cocktails such as White Russian, Black Russian, and B-52, etc.

The alcohol content varies between 20.0% and 35%, depending on the variety. Kahlúa Especial is made from premium Arabica coffee beans and has an alcohol content of 36%. It is also less sweet, and a bit thinner.

The top markets for Kahlúa are Canada and the United States

Kahlua has been made since 1936 by the Pedro Domecq company. Some sources say it first introduced into America in 1951 by Beverly Hills liquor importer Jules Berman [1] Yet, CooksInfo.com has found 1945 advertisements for it so it was clearly available in America before that. 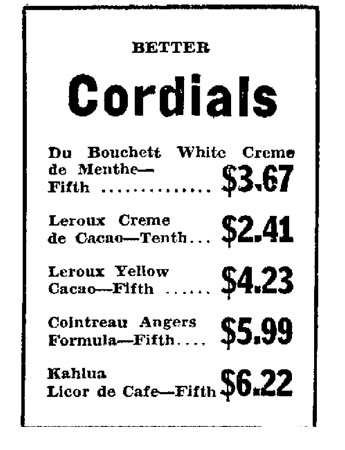 Kahlua was popularized in the 1950s in the “Sombrero cocktail” which was Kahlúa and milk.

In the first half of the 1950s, it was already being pressed into service as a dessert ingredient. In 1953, the menu for Antonio Biari’s “Cascade Terrace” restaurant at the Lake Merritt Hotel in Oakland, California advertised a “Kahlua Parfait” for 75 cents. [2]

“With some people, Kahlúa is a ritual. Devoted as they are to orthodoxy, they drink it straight; in a cordial glass; after dinner. There’s definitely something bewitching about the brew. Many, charmed by the versatility of this captivating coffee liqueur, are compelled to exult in such devilish concoctions as the Black Russian, Brave Bull, Kahlia Sour. Still others swirl it into dazzling desserts. Consider the sorcery of this magical mixture from Old Mexico. And while you’re at it, consider the source, because what the Mexicans don’t know about coffee liqueur doesn’t amount to a hill of beans. Jules Berman & Associates, Inc., 9025 Wilshire Boulevard, Beverly Hills, California. Kahlúa. 53 proof” — Advertisement in Commentary Magazine, June 1965. Page 10.

Kahlúa means “House of the Acolhua people” in the Veracruz Nahuatl language.

This web site generates income from affiliated links and ads at no cost to you to fund continued research · Information on this site is Copyright © 2022· Feel free to cite correctly, but copying whole pages for your website is content theft and will be DCMA'd.
Tagged With: Liqueurs, Mexican Food