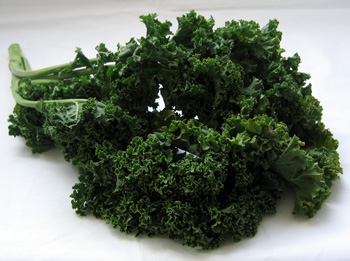 Though a member of the cabbage family, kale is a “loose leaf” cabbage. Its leaves don’t curl inwards, they sprout upwards and outwards. Its close cousin, Cavolo Nero (aka Palm Cabbage), also grows like this.

There are many varieties of kale; the leaf colour will vary by variety. The leaves may be curly or flat, greyish-green, bluish, yellowish, reddish-green or purpley-red. Most popular varieties tend to have curly, grey-green leaves.

Kale grows best in cool weather. In fact, a nip of frost before harvesting sweetens the leaves. If left in the ground to over-winter, it will live through the winter, and flower in its second season. But that’s that — it’s biennial plant, and after that, it dies.

Kale’s flavour is very “robust”, as the euphemism goes. In fact, Kkale has been used for centuries as animal feed.

Cavolo Nero is a variety of kale.

Choose crisp leaves with deep colour with no yellowing or bug holes. 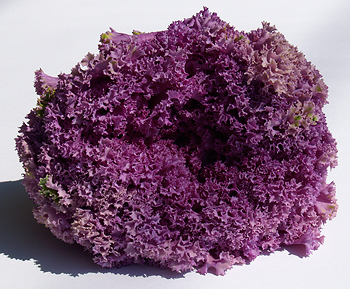 Wash kale well because sand and dirt get caught up in the leaves. You’ll probably have to rinse twice, in fact. Chop, then discard stems as they are too tough to cook up.

If boiling, cook in boiling water for 5 to 7 minutes, keeping the lid off the pot to reduce the odour (sic). Drain, then reheat in a pan with a good heaping tablespoon of butter.

Kale and Collards are a good combo for cooked greens.

Some consider kale the most nutritious vegetable in the world, with just about everything going for it.

Store in fridge either in plastic bag or wrapped in damp paper towels for up to 3 days. Past that, it starts to get a much stronger taste.

You can also freeze cooked kale.

Kale is a very ancient member of the cabbage family, possibly native to the Eastern Mediterranean. The Greeks and Romans grew kale, though they didn’t distinguish between kale and collards; that is a modern distinction.

It was probably during the Roman Empire that it arrived in France and Britain.

“In the rural districts of Scotland the first ceremony of Halloween is the pulling of plants of kail, or cabbage stalks in the garden. The youths and maidens go out hand in hand, with their eyes shut, and pull the first stalk they meet with. They then return to the fireside to examine their prizes. According as the stalk is found big or little, straight or crooked, so is the future husband or wife of the person who pulled it to be. The quantity of yird (sic) or earth clinging to the root is supposed to denote the amount of fortune or dowry and the taste of the castoc (sic), or pith, the natural temper and disposition. Lastly, the stems, or to give them their ordinary appellation, the runts, are placed one after another over the door, and the Christian names of the individuals who chance thereafter to enter, “are held in the same succession to indicate those of the persons whom the parties are to marry.” — Sharpe’s London Magazine. London: T.B. Sharpe. May 1846 to October 1846. Page 409, col. 2.

This web site generates income from affiliated links and ads at no cost to you to fund continued research · Information on this site is Copyright © 2022· Feel free to cite correctly, but copying whole pages for your website is content theft and will be DCMA'd.
Tagged With: Ancient Greece, Greens, Roman Food