Kokuho Rose Rice® is a proprietary, medium-grain rice grown and sold by Koda Farms of South Dos Palos in the San Joaquin Valley of California since 1963.

They offer two versions of the rice.

The first is the brown unpolished rice, with the bran left on. When cooked, it is slightly chewy and has a slight nutty flavour.

The second is a polished, white version with the bran removed. It is more tender, and slightly sticky when cooked. They call this their “sushi rice”, aiming it at the sushi market.

The company is also relatively well known for other products such as Mochiko Blue Star Brand® Sweet Rice Flour. 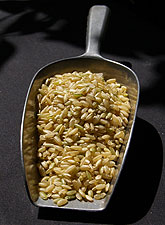 Koda Farms was founded in the late 1920s by Keisaburo Koda.

The company bred the rice in the late 1950s through their breeding research. They continued developing it and released it for sale in 1963.

Kokuho Rose® is a trade-marked name.