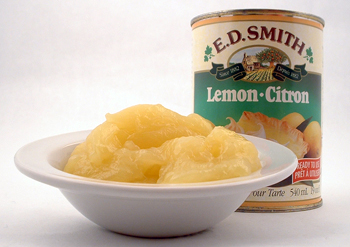 Contents hide
Lemon Pie Filling is used to make desserts. The most typical use is Lemon Meringue Pie, though squares, tarts and other desserts can also be made from it.

The filling is thick and spreadable. The filling should be smooth with an even consistency, and look like a firm, opaque jelly. It is almost like Lemon Curd, except that the filling is a bit more jelly-like than the Curd, and therefore firmer. The colour should be a light to medium yellow. The flavour is both sweet and lemony-tart. The pH is usually 3.5 to 4.0.

Lemon Pie Filling can be made at home, but is often bought at the store either in cans ready to use, or as powdered package mixes that you add hot water to.

There are roughly three types of commercial Lemon Pie Fillings.

Generally a commercial filling does not require any cooking, unless you put on it a topping that does, such as meringue. 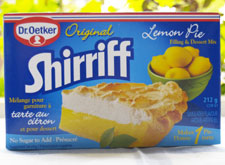 British recipes for Lemon Pie Filling have tended not to use cornstarch (cornflour.) Ruth Watson (The Really Helpful Cookbook, Random House, 2000), however, is probably correct in feeling that without the cornstarch to give it a firm, gel-like body, the consistency just isn’t right. You would be making instead Lemon Curd, which isn’t firm enough to hold its shape when pieces of pie or squares are cut. Generally, you use about 2 tablespoon of cornstarch per pie.

Some recipes use both lemon zest and lemon juice. They’ll have you mix the zest in at the start of cooking the filling in a pot, but stir the lemon juice in only after it has thickened. That’s because the acidity in the lemon juice can stop the thickening reaction in the mixture from happening if it’s added too early.

A problem that some people have in making their own Lemon Pie Filling is that the filling either fails to thicken, or seems to have thickened but then thins out when you remove it from the heat. The science behind this is that in egg yolk there is something (“alpha amalase”) which actually works against the starch, and breaks it down. The filling has to be heated to a certain point (160 F / 71 C) and held there for a few minutes to neutralize this substance. Which shouldn’t normally be a problem, as the starch has to be cooked, too.

This web site generates income from affiliated links and ads at no cost to you to fund continued research · Information on this site is Copyright © 2022· Feel free to cite correctly, but copying whole pages for your website is content theft and will be DCMA'd.
Tagged With: Lemon