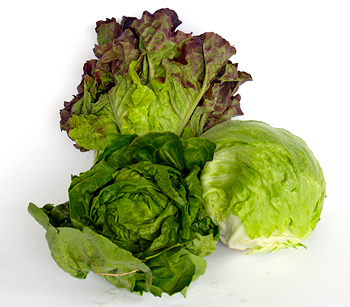 Lettuces are related to Dandelions.

Almost all Lettuces except Iceberg have both red and green varieties. Lettuce leaves vary from very tender (in the Butterhead group) to very crisp (Crisphead group.)

There are at least four main types of Lettuce. Some Lettuces, such as Batavia, fall in between Looseleaf and Crisphead, and are called Summer Crisp or Semi-heading. Some people think this should be a fifth, separate type of Lettuce.

Butterhead (aka Round Lettuce)

These are sometimes called “Boston” or “Limehead” or “Limestone” Lettuces. Their loose leaves form loose, semi-heads in the middle.

The leaves are very tender and soft. These Lettuces are more perishable than those from the Crisphead family. Varieties include Boston, Butter-crunch, Ermosa and Esmeralda.

In the UK, this grouping of Lettuce is being called “Round Lettuce”, to helpfully distinguish it from all the other Lettuces that are, er…. round.

This group of Lettuces is also called “Head Lettuces” or the “Iceberg Lettuce” family, because it includes the well-known Iceberg Lettuce.

The Lettuces in this group have very mild flavours; their crisp leaves form tight heads. Though this is the least nutritious grouping of Lettuce (owing to the pale green leaves) it stores better than many of the other kinds, so that you do have something to eat when you reach for it in the fridge.

These are also called “Curled Lettuces.” They don’t form a head; in fact, it’s only because all the leaves are joined at the stem that they stay together in a loose bunch at all.

Looseleaf Lettuces are ideal for what gardeners call “cut and come again” harvesting: you snip off some leaves, leaving enough for the plant to stay alive, and more leaves will grow back. Pale pink tinges on the stems of Looseleaf Lettuces indicate they were grown under quite wet growing conditions; such Lettuces will not store as long as usual.

Also called the “Cos”, family, these Lettuces are somewhat like Looseleaf, but they form a tighter bunch, and instead of having floppy leaves, have leaves that are firm enough to stay erect. They have crisp leaves and crunchy ribs.

Growers are always looking for Lettuces that won’t “bolt” so easily in the summer heat: when they bolt, their stems lengthen, and they produce flowers on flower stalks like their relative the Dandelion does. Other leafy plants such as spinach are also described as “bolting” when they start to move into a flowering stage.

It’s worth drying lettuce well before using it in a salad — many of us have gone through a phase where we wondered if it was really worth the extra bother when you’re in a rush, only to find that if we didn’t, the dressing always just ran off the leaves.

When you get your lettuce home, wrap it in a couple of paper towels, turn the plastic bag inside-out (if it came in one) and put it into the refrigerator. This should make it last several weeks. If it didn’t come in its own plastic bag (for instance when you’ve bought it from a farmer’s market), use another clean plastic bag that hasn’t had meat or seafood in it, or, store it in a purpose-made salad-leaf plastic storage tub.

Don’t wash any Lettuce before storing, unless you are prepared there and then to dry it extremely well, as dampness will cause it to deteriorate more quickly.

Lettuce probably evolved from a wild species which is still extant called Lactuca serriola. It is very bitter.

The Ancient Egyptians grew Lettuce, as did the Greeks and Romans.

The Egyptians are the ones that we first know cultivated it; theirs was too bitter for eating, though. It was used for medicinal purposes. In its earlier, bitter stages Lettuce would have had mild narcotic effects.

The Romans worked at developing varieties that were less and less bitter with bigger and bigger leaves. They would also grow their Lettuces covered for a while to keep them out of the sun, to blanch the Lettuces and make them less bitter. By the first century BC, the Romans had already developed at least 9 varieties, as mentioned by Pliny. By 100 AD, there were about 12 varieties. All the Roman varieties would have been Looseleaf. It was probably the Romans who introduced Lettuce to Britain.

Mention of Lettuce disappears during the Dark Ages up until the Middle Ages, at which point it started to be used medicinally again (though Wild Lettuce, mentioned as a penance in the Book of Numbers in the Old Testament, was often mentioned in sermons and writings).

Seeds were brought from Europe to the New World as early as 1494 with Columbus.

In the 1800s — in fact, up until the advent of commercial refrigeration — Lettuce was quite expensive as it is very perishable without refrigeration. Except for those who grew it themselves, only the rich could afford it.

Lettuce is still a symbol of sexual impotence for Greeks because of its association with Adonis. Adonis attempted to hide from Apollo in a patch of Wild Lettuce growing by the water.

Many claim that Lettuce is mentioned in The Canterbury Tales, but the line they use from the Summoner’s Introduction actually says “Well lov’d he garlic, onions, and leeks”, not Lettuce.

“Virtue! a fig! ’tis in ourselves that we are thus or thus. Our bodies are our gardens, to the which our wills are gardeners: so that if we will plant nettles, or sow Lettuce, set hyssop and weed up thyme, supply it with one gender of herbs, or distract it with many, either to have it sterile with idleness, or manured with industry, why, the power and corrigible authority of this lies in our wills.” — Iago. Othello, The Moor of Venice, I, 3. Shakespeare.

Lettuce exudes a milky sap when cut from its roots (the same thing happens to its cousin, the Dandelion). This gives it its name: “lac” in Latin meant milk, so in Latin it was called “lactuca”, which eventually became Lettuce in English.

This web site generates income from affiliated links and ads at no cost to you to fund continued research · Information on this site is Copyright © 2022· Feel free to cite correctly, but copying whole pages for your website is content theft and will be DCMA'd.
Tagged With: Ancient Egypt, Ancient Greece, Leafy Vegetables, Lettuce, Roman