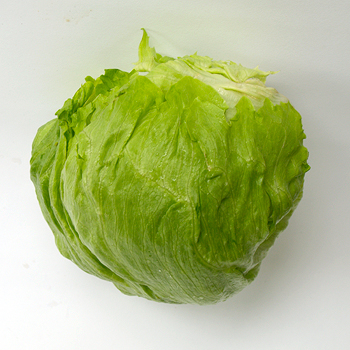 This is the Lettuce that foodies love to hate. It’s usually dismissed by all with a single, knowing sneer.

Iceberg Lettuce has a firm, tight head of crisp, pale green leaves. The leaves have a great deal of cool moisture in them; some would say more moisture than flavour, in reference to its very mild flavour.

But they may be missing the point: Iceberg Lettuce is about crunch and texture, not exotic flavour. No other lettuce seems quite right on a burger, or shredded on top of Tex-Mex to give that satisfying, cooling crunch. No other lettuce leaf is sturdy enough to be used as a “cup” to serve food in.

In defence of Iceberg Lettuce, its round, dense shape not only makes it easy to ship; it helps the lettuce survive the trip to the market in the right kind of condition that consumers want to buy. When consumers get it home, it will last a while in the fridge, and not curl up and die on them the next day as many lettuces already start to do. It stands up well to heavy, creamy dressings as other lettuce leaves can’t — and if you think of when it had its heyday, in the middle chunk of the 1900s, those were exactly the salad dressings that were popular then.

Besides, someone is buying it: Iceberg Lettuce was still the second single most popular vegetable after potatoes (as of 2000) — and that’s all potatoes, lumped together.

Iceberg Lettuce is sometimes called Crisphead, though Crisphead is actually the name of the category or type of lettuce that it is; other Crisphead varieties include Great Lakes, Imperial, Vanguard, and Western.

Iceberg is the only variety of lettuce that doesn’t have a red variety. It is grown year-round in California.

Choose firm heads that are heavy for their size, with minimal browning at the edges (called “rust”), and leaves that aren’t wilting.

Cut out core, wash, then chop or tear leaves off, or slice head into wedges. A medium-sized head should serve 6 people.

Simmer left-over Iceberg lettuce leaves in a bit of water, whiz through a blender and add to pea soups to give the soups a depth of flavour.

The Chinese have also discovered cooking with Iceberg: “In her book The Wisdom of the Chinese Kitchen (Simon & Schuster, 1999), Grace Young includes a recipe for iceberg lettuce stir-fried with garlic, soy sauce, and black pepper that completely changed the way I think about the food; the high heat turns the leaves tender, glossy, and aromatic. “The Chinese, who love iceberg, stir-fry or braise it because they generally don’t eat raw vegetables,” Young told me, speculating that the ingredient became popular after it was introduced to Hong Kong in the 1960s. Today, in that city and other Western-leaning ones, like Shanghai, iceberg lettuce is sometimes shredded and served as a base for pan-fried meats; its sturdy leaves are also used as edible cups for minced chicken, duck, or pork. What other lettuce could be put to work like that?” [2]

Iceberg Lettuce is not as nutritious as lettuces with darker leaves. However, it is a good source of potassium, phosphorous, thiamin, vitamin B (folate) and vitamin B6.

Store unwashed in plastic bag in fridge for up to 2 weeks. 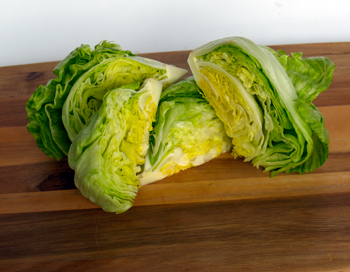 Iceberg Lettuce was developed by W. Atlee Burpee at his farm, Fordhook Farm, at Doyleston, Pennsylvania. It was released commercially by Burpee seeds in 1894.

The Great Lakes variety of Iceberg lettuce emerged in the 1940s, from a cross between Brittle Ice lettuce (a sister lettuce also developed by Burpee) and another crisphead lettuce.

Though Iceberg began to decline in popularity at the end of the 1900s, it still commanded 73% of the lettuce market in the US in 2000.

It is routinely pronounced “dead” as a food item. In 2007, Jacob Adelman of the Associated Press reported that iceberg acreage was down from 198,500 acres (1998) to 174,600 acres in 2006. In the same period, romaine lettuce increased from 36,450 acres to 61,000 acres. However, a retro movement is taking hold, with small-scale, artisanal growers now reviving heirloom iceberg varieties such as New York Head, Great Lakes, and Ice Queen [2], which is changing people’s notions of iceberg lettuce.

Iceberg Lettuce was late to the UK, not being imported to there until the mid 1970s. Marks & Spencers began carrying it in the early 1980s. The 1980s fashionableness of prawn cocktails (also late to the UK) promoted widespread awareness of it. By 1984, it was being grown commercially in the UK and had become extremely popular. But by 2011, the Daily Telegraph reported that Iceberg Lettuce sales had fallen by 35% in the UK, with consumers switching to more robust tasting leaves such as rocket, radicchio and watercress. [1]

In the 1955 film East of Eden with James Dean (and of course, in the earlier book by John Steinbeck), ice is used to cool lettuce shipments by train from California to the east coast.

“Iceberg lettuce is perhaps the most aptly named plant in the world and should be avoided as though you were the Titanic with a second chance.” — Alan Koehler (food writer, author of The Madison Avenue Cook Book)

“When did I stop eating these things … and God help me, why?….I realise, now, that I’ve been deeply wrong for most of the culinary phase of my life. Yes, iceberg is a commercial lettuce, designed for shelf life and appearance over taste and has the nutritional value of cellophane – but all that is just as true of frisee or chicory.” — Hayward, Tim. The tip of the iceberg. Word of Mouth Blog. Manchester: The Guardian. 22 January 2010. Retrieved January 2010 from http://www.guardian.co.uk/lifeandstyle/wordofmouth/2010/jan/22/iceberg-lettuce

A myth has emerged that Iceberg started to be called “iceberg” around the 1920s, when growers (particularly in the area of Salinas, California), started shipping it east on trains covered in crushed ice. However George Ball, current CEO of the developer Burpee, points out a 1904 Burpee seed catalogue in which the lettuce is already referred to as iceberg (and a sister lettuce referred to as brittle-ice) before any such shipping even began. [2]

Hayward, Tim. The tip of the iceberg. Word of Mouth Blog. Manchester: The Guardian. 22 January 2010. Retrieved January 2010 from http://www.guardian.co.uk/lifeandstyle/wordofmouth/2010/jan/22/iceberg-lettuce

This web site generates income from affiliated links and ads at no cost to you to fund continued research · Information on this site is Copyright © 2022· Feel free to cite correctly, but copying whole pages for your website is content theft and will be DCMA'd.
Tagged With: American Food, Lettuce