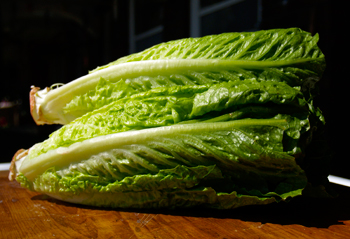 Romaine Lettuce grows 8 to 9 inches tall (20 to 23 cm), with long, green, crisp leaves that are rounded at the ends. The inside leaves are pale with yellowish ribs and a sweet taste.

Romaine has the crunch of Iceberg Lettuce, but with more flavour. The crunch comes from the ribs in the leaves.

In growing Romaine, producers can face the problem of “lettuce dieback disease” which can wipe out entire fields and to which Romaine is very susceptible.

When buying, choose bunches with firm leaves that hold tight together.

Romaine’s most well-known use has been for Caesar salad.

Red Romaine variety is more dramatic, with the red tinges at its tips, but the leaves are softer and less crisp.

Varieties of Red Romaine include Rosaltia and Sweet Valentine.

To use, break off the leaves that you need, wash, dry, then break them by hand into the sizes that you need for what you are making. If you need lots of really nice looking small pieces, consider using instead Little Gem Lettuce.

Has good storage life in the fridge. Store in fridge unwashed in plastic bag for up to a week.

In 2007, Jacob Adelman of the Associated Press reported that romaine lettuce acreage was up from 36,450 acres (1998) to 61,000 acres in 2006. Some attributed the growth in sales to the continued increase in popularity of Caesar Salad. [1]

In 2011, the Daily Telegraph reported that sales of Cos (Romaine) lettuce were falling in favour of more bitter-tasting leaves such as rocket, radicchio and watercress. [2]

Some speculate that, because of one of this lettuce’s alternative names of “Cos”, it may have originated on an island off the coast of Turkey called Kos. Romaine was, however, grown quite widely throughout the Middle East before then by the Arabs. With the Arabic word for lettuce being “khas”, this is a likelier source of the name “cos.”

Romaine type lettuces are amongst the oldest, and seem to be the upright ones depicted in Egyptian tombs. The Romans would have had these varieties, and may have introduced them into Britain. That being said, there is no evidence the Romans had the exact Romaine lettuce that we have today, or that it was served in a Caesar salad to Caesar or any other emperor. From the Middle East, the lettuce had made its way to Italy, and from there to Europe, thus its name of “Roman” lettuce, or Romaine. The lettuces that the Romans had were still quite bitter compared to ours today, though they did some work on breeding the bitterness out of them.

The lettuce was being referred to as Roman lettuce as early as 1577: “The greater which will become crisped and thick (named of divers, the Romane Lettice) that yieldeth white and far bigger leaves… If the owner would possesse faire and white Lettices, he ought to bind the leaves up together with a thread.” — Thomas Hill. The Gardener’s Labyrinth. 1577.

This web site generates income from affiliated links and ads at no cost to you to fund continued research · Information on this site is Copyright © 2022· Feel free to cite correctly, but copying whole pages for your website is content theft and will be DCMA'd.
Tagged With: Romaine