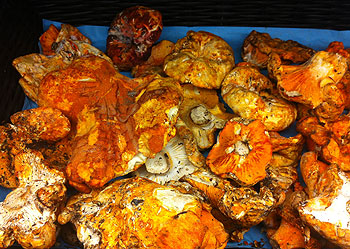 Lobster Mushroom is a generic name used to describe mushrooms that have been infected by a parasitical fungus, called “Hypomyces Lactifluorum.” The fungus turns the infected mushrooms a bright orange, orangey-red, or even a purplish-red on the outside. The mushrooms also acquire a firm texture and a delicate, woody taste. Some people think they even taste a bit like lobster or shellfish, but it may be that they’re reading that into their taste buds from the name.

Efforts at cultivating Lobster Mushrooms domestically hinge on being able to grow domestically “Lactarius” or “Russula” mushrooms, which the parasite usually prefers, but ways of growing these particular mushroom varieties domestically is still being studied. In the wild, not all varieties of Lactarius or Russula mushrooms that the parasite might infect are safe to eat.

You can now buy Lobster Mushrooms in stores, gathered from the wild by experienced collectors who know what they are doing. They are consequently quite expensive, costing about 18 to 24 dollars a pound (450g), 2012 prices.

The red colour loses its brightness after cooking.

It is very, very hard to pick safe Lobster Mushrooms in the wild, as the fungus could also take poisonous mushrooms as hosts. Because the parasite totally transforms the look of the mushroom, identification is very hard.

This web site generates income from affiliated links and ads at no cost to you to fund continued research · Information on this site is Copyright © 2022· Feel free to cite correctly, but copying whole pages for your website is content theft and will be DCMA'd.
Tagged With: Wild Mushrooms