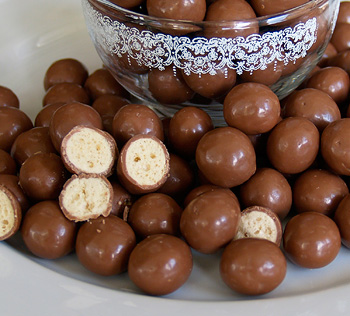 Contents hide
Maltesers are a candy.

They are small balls of crunchy malt honeycomb covered with milk chocolate. They are crunchy when you first bite into them, then they dissolve in your mouth.

They are popular in Australia, Canada, Ireland and in the UK.

They are sold in many different types of packaging.

A 2008 advertising campaign in Britain, inviting consumers to believe that Maltesers are a low-calorie snack, was disallowed by the Advertising Standards Agency. Under EU regulations, a food can only be promoted as low calories if it contains 40 or fewer calories per 100g.

UK made Maltesers are suitable for vegetarians — the whey powder in them is a by-product of vegetarian rennet.

Maltesers were created in 1936 by Forrest Mars, Sr, who first called them “Energy Balls.”

The product name is a combination of “malt” and “teasers.”

This web site generates income from affiliated links and ads at no cost to you to fund continued research · Information on this site is Copyright © 2022· Feel free to cite correctly, but copying whole pages for your website is content theft and will be DCMA'd.
Tagged With: Malted Barley, Mars Family