×
You are here: Home / Archives for Malted Barley

Daily Messenger. Canandaigua, New York. 25 July 1930. P. 8. Barley Malt Syrup is a very sticky, dark brown syrup made from malted barley. It tastes a bit like molasses, but without any harsh taste. It is not as sweet as honey, and only half as sweet as white sugar (sucrose.) Some brands may add…

END_OF_DOCUMENT_TOKEN_TO_BE_REPLACED

Scientifically, Malt Sugar, aka Maltose, is two glucose molecules joined together, making it a “dissacharide.” The formula is C12H22O11·H2O. More prosaically, it is a sugar made from grains by malting them. The grains might include barley, rice or wheat. It can come as a thick, sticky clear or amber-coloured syrup sold in tins or tubs,…

END_OF_DOCUMENT_TOKEN_TO_BE_REPLACED

Malted barley flour is made from barley that is malted (e.g. barley that is allowed to germinate), steam-dried, hulled, then ground and sifted. It is usually made from the species of barley that has six rows of seed to it per head. Technically, because it’s malted, it has increased enzyme activity. More precisely, it contains…

END_OF_DOCUMENT_TOKEN_TO_BE_REPLACED

Malted Milk Powder is a dry mixture of malted barley flour, wheat flour and powdered milk. The malted barley and wheat flour have water added to them, and are simmered to make them a “mash” (as is made by brewers.) The simmering converts the starches into sugar. The water is then filtered, the solids are…

END_OF_DOCUMENT_TOKEN_TO_BE_REPLACED

Often just called a “malt”, a Malted Milk Shake is a milkshake with malted powder in it.. A good one should be very thick; you drink it slowly as it melts. Classically, the flavour is chocolate, but there is nothing preventing it from being vanilla, strawberry, etc. Cooking Tips Classic Proportions for Chocolate Malted Milks…

END_OF_DOCUMENT_TOKEN_TO_BE_REPLACED 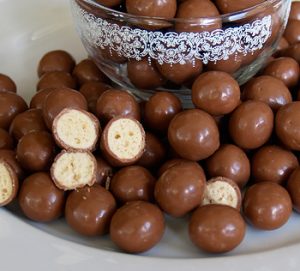 Maltesers © Denzil Green Maltesers are a candy. They are small balls of crunchy malt honeycomb covered with milk chocolate. They are crunchy when you first bite into them, then they dissolve in your mouth. They are popular in Australia, Canada, Ireland and in the UK. They are sold in many different types of packaging….