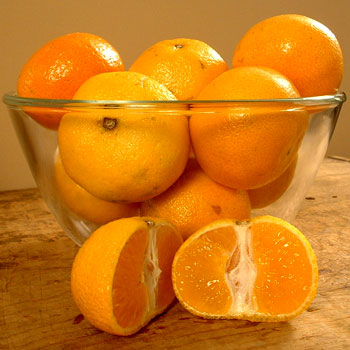 The name “Mandarin Oranges” is used to refer both to an orange and to a family of oranges that includes Dancys, Clementines, Honey, Pixie, Satsumas, Owari, King, Oneco, Ponkan and Willow Leaf. Technically, it really is just an “umbrella” name used to refer to the family. Producers and marketers, though, aren’t yet sure whether to market Mandarins as one fruit, or to be clear to consumers that there are different kinds of Mandarin Oranges.

Mandarin trees are small, only growing up to about 25 feet tall (7.5 metres.) They have thin, spiny, thorny branches and small leaves, and produce small flowers. Mandarin Oranges will have anywhere from 9 to 15 easily-separated sections inside. The skin on some Mandarins is actually green. If people saw them on produce stalls, they would walk on by thinking the oranges weren’t ripe yet.

Mandarins in general have the following production problems: the oranges sometimes fall off the tree of their own accord before harvesting, the trees will sometimes skip years in bearing fruit, and the thin peel of the fruit can make shipping a challenge. The thin skin, though, does help make them easy to peel. Some Mandarin Oranges are seedless; some have seeds.

An average-sized Mandarin Orange is around 2 ½ inches wide (6.5 cm.)

Most canned mandarin orange pieces are from Satsumas. They are canned in a syrup or in water. Canning has the advantage of presenting orange-coloured pieces to consumers from fruit that consumers might otherwise be unsure of, as the skin on these is naturally green.

Mandarin oranges probably originated in North East India, as early as 2000 BC. They arrived from China in 1805, being brought to England as specimen trees in 1805. Some children of these specimen trees were taken to Italy and grown (mandarin trees were being raised in Genoa in 1849), and from there spread throughout the Mediterranean. Mandarins reached Australia directly from China in the 1820s.

Though Americans think of mandarins as a new fruit on their shores, the first one there was actually grown in New Orleans by the Italian consul there: sometime between 1840 and 1850, he planted the Willow Leaf or “China Mandarin” variety. Mandarins were introduced into Florida in the 1870s.

The English name of this orange family derives from the name for public officials in China, who were called mandarins owing to the bright orange robes that they wore as a sign of office. The first mandarin-type oranges to reach the west were from Tangiers, and thus their name “Tangerines”.