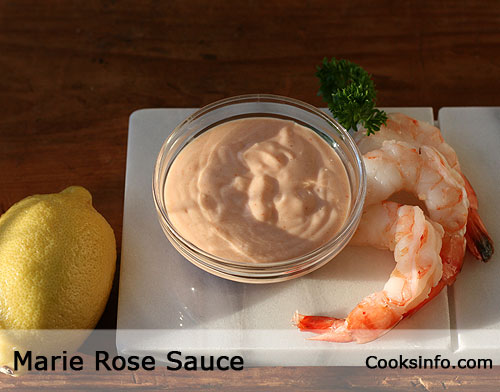 Sometimes a tablespoon of lemon juice and a dash of something zippy, such as a chili sauce (such as Tabasco), or cayenne pepper is added, though that starts to approach Seafood Sauce territory.

Use a light hand with the ketchup, as the sauce should not taste of ketchup.

Marie Rose Sauce was very popular in the UK in the 1970s, being served with Prawn Cocktail (aka Shrimp Cocktail.)

This web site generates income from affiliated links and ads at no cost to you to fund continued research · Information on this site is Copyright © 2022· Feel free to cite correctly, but copying whole pages for your website is content theft and will be DCMA'd.
Tagged With: English Sauces