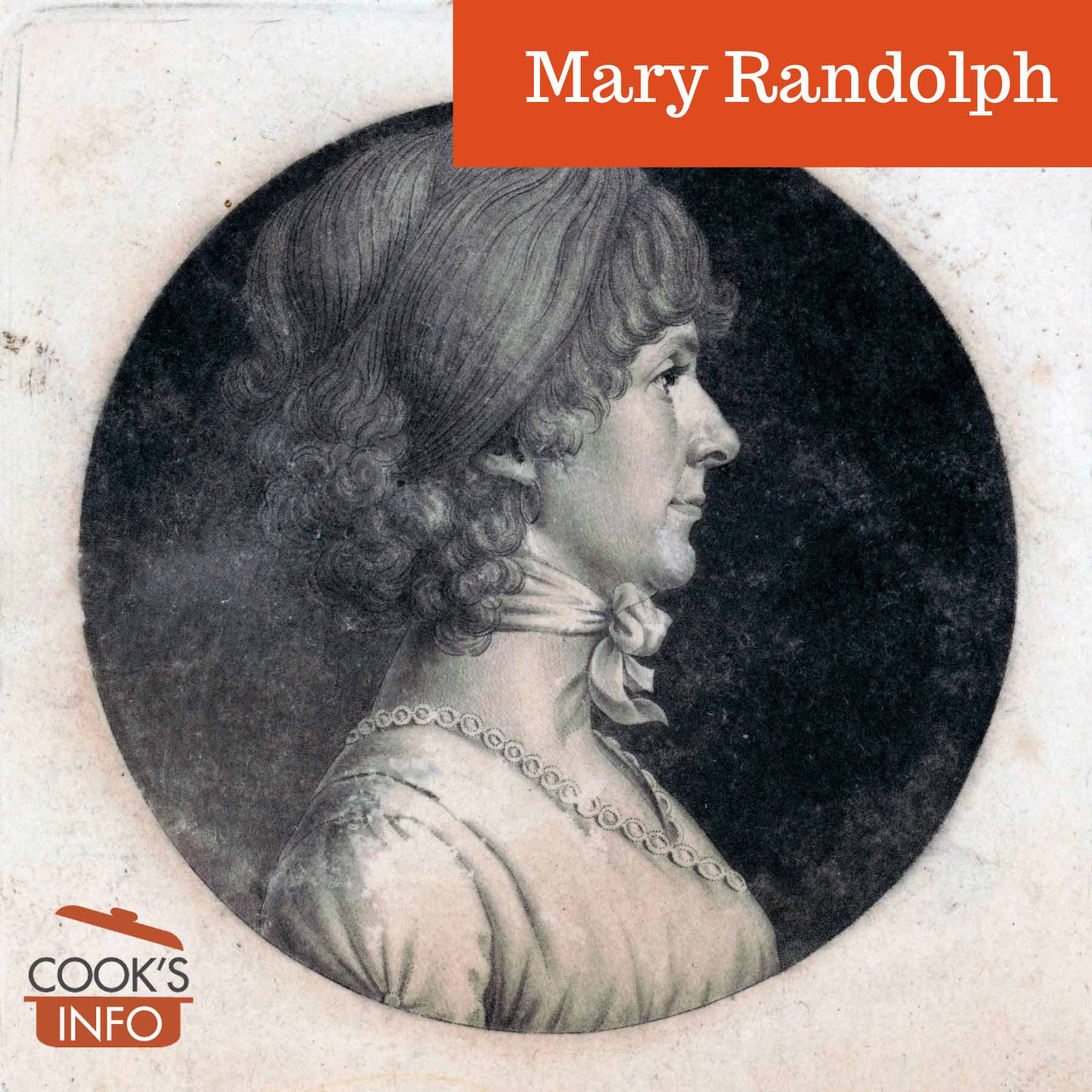 Mary Randolph was the author of “The Virginia Housewife”, the first regional cookbook in the United States, published in 1824. It is still being reprinted in facsimile. She was also the first person to be buried at what is now called Arlington National Cemetery in the U.S..

One of the most well-connected women of her time

Mary Randolph was one of the most well-connected women in the United States at the time. Her grandmother was a Randolph, she was a Randolph, and she married a Randolph. Her nickname was “Molly.” One of her brothers, Thomas Mann Randolph, would become the governor of Virginia and marry Thomas Jefferson’s daughter Martha J., who ran her father’s Monticello household from 1790 to 1826.

As a child of privilege, even in her down and out times, she still had servants who did most of the toiling in the kitchen, and her level of “hard times” was still higher than that of most people’s “good times.”

Mary was born 9 August 1762 as the first child born to Thomas Mann (1741 – 19 November 1793) and Ann Cary Randolph, who lived in Tuckahoe, Goochland County. Thomas and Ann would have 13 children in total. Her tombstone says she was born in Ampthill, which was a plantation owned by her mother’s parents Archibald Cary and his wife Mary (née Randolph, 1727 – 1781) in Ampthill, Chesterfield County, Virginia. In 1929, the plantation house was moved to Richmond; the site is now (2007) the location of the Dupont Company.

She was tutored by Thomas Jefferson’s father, Peter. Her family was related to the Jeffersons as distant cousins, and her father had been raised by Peter and his wife. 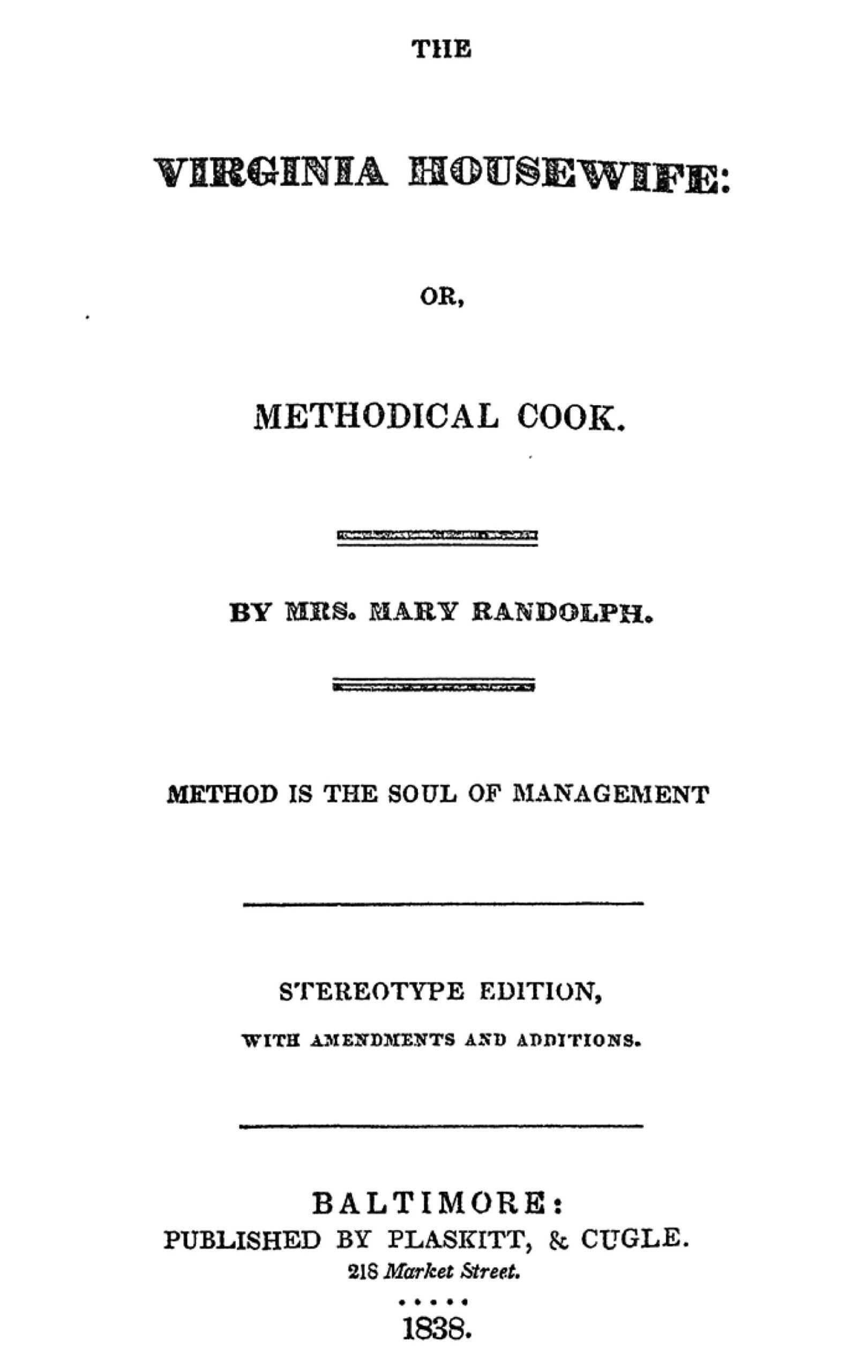 In 1824, Mary published her now-famous cookbook, “The Virginia Housewife.”

Her book reflects the cooking of the American south at the time, recording everything from beaten biscuits to okra to catfish, with the base still noticeably British. And, there are many European recipes as well, because it was intended for those in wealthy households like hers that knew far more cooking than just “down-home” cooking. Her book also puts paid to a number of theories about the period. For instance, she features tomatoes in no less than 17 of her recipes, showing that tomatoes were in fact in use in the early 1800s in America, despite the many food writers who believe otherwise.

She was buried at Arlington, the home of her cousin’s husband George Washington Parke Custis (later the property of Confederate General Robert E. Lee and his wife.) The Curtis’s mansion is still there; Mary is buried 30 metres (100 feet) north of it. The grounds would later become known as Arlington National Cemetery. 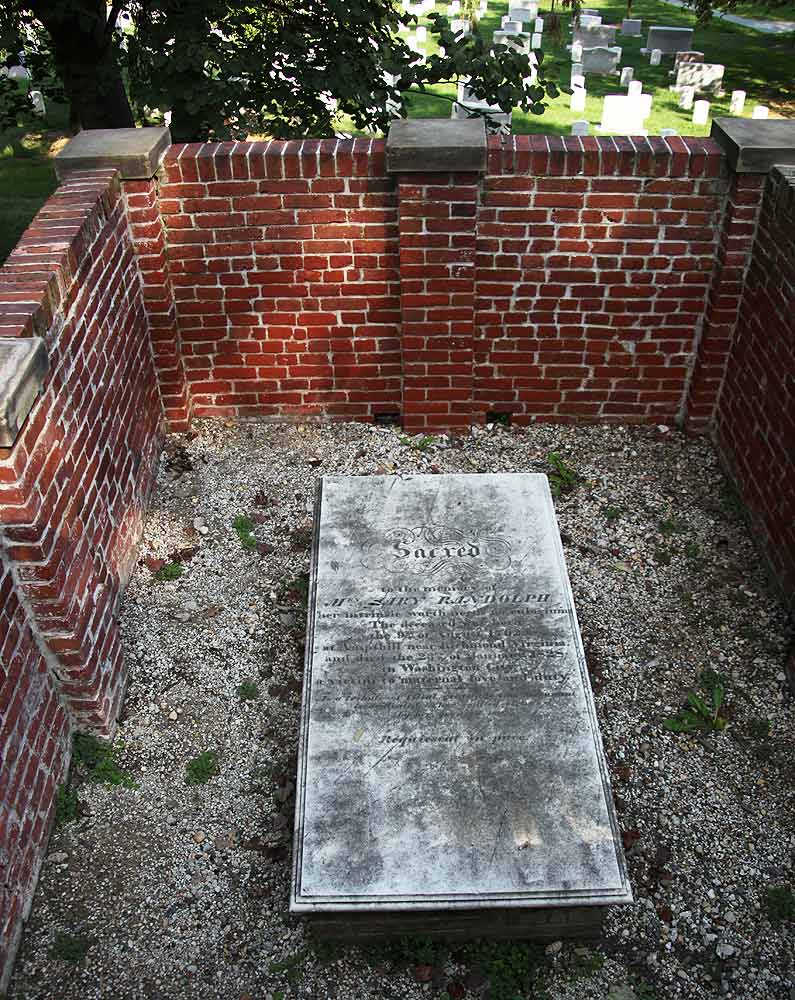 Today, the area she is buried in is known as Section 45. She was the first person to be buried at Arlington — not Private William Christman, 67th Pennsylvania Infantry, as some sources say: he was buried there in 1864. 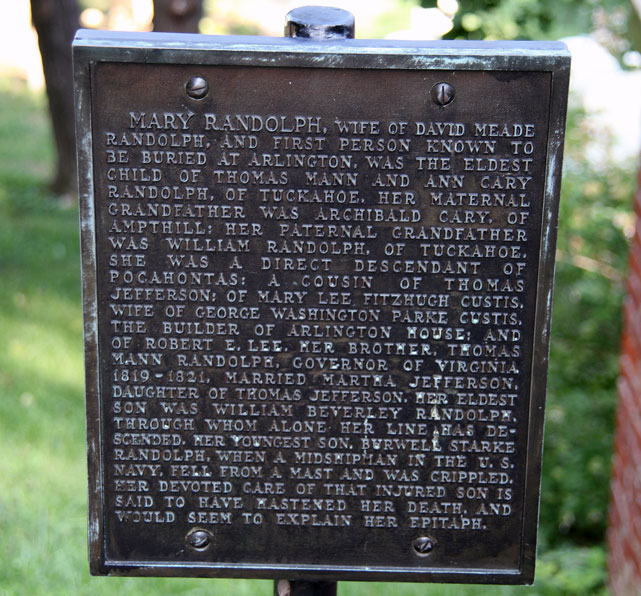 Mary Randolph, wife of David Meade Randolph, and first person known to be buried at Arlington, was the eldest child of Thomas Mann and Ann Cary Randolph, of Tuckahoe. Her maternal grandfather was Archibald Cary, of Ampthill; her paternal grandfather was William Randolph, of Tuckahoe. She was a direct descendant of Pocahontas; a cousin of Thomas Jefferson; of Mary Lee Fitzhugh Custis, wife of George Washington Parke Custis, the builder of Arlington House; and of Robert E. Lee. Her brother, Thomas Mann Randolph, Governor of Virginia 1819-1821, married Martha Jefferson, daughter of Thomas Jefferson. Her eldest son was William Beverley Randolph, through whom alone her line has descended. Her youngest son, Burwell Starke Randolph, when a midshipman in the U.S. Navy, fell from a mast and was crippled. Her devoted care of that injured son is said to have hastened her death, and would seem to explain her epitaph.

“In the memory of Mrs. Mary Randolph,
Her intrinsic worth needs no eulogium.
The deceased was born the 9th of August, 1762 at Amphill near Richmond, Virginia
And died the 23rd of January 1828
In Washington City a victim to maternal love and duty.
As a tribute of filial gratitude this monument is dedicated to her exhaulted (sic) virtue by her youngest son”