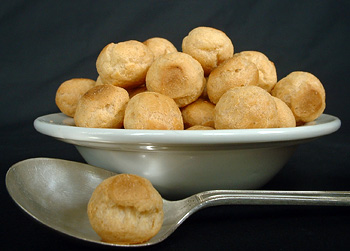 Matzo balls are small, round dumplings for soup. The dough is made from eggs, water, salt, pepper, matzo meal and schmaltz (chicken fat.)

You form the stiff dough into small balls or drop by the tablespoonful into the boiling water or soup. They generally end up very light and fluffy, though some people prefer to make theirs firmer and heavier.

They will sink into a bowl of soup, rather than floating in it.

There are a zillion different recipes, tips and tricks. Some even involve using ginger ale instead of water in the dough to help keep them light. The only general agreement is that everyone’s grandmother’s were the best; and that most people have a sister-in-law who makes them hard enough to take out an opponent at 20 paces.

Matzo Balls made from whole wheat matzo meal can be quite heavy.

Matzo Meal and Matzo Ball mixes were first sold commercially, already ground and ready to use, by the Manischewitz Company in the early 1900s. Until that time, Matzo Balls were really only made at Passover. After that, because making them had just got a whole lot easier, they became a year round food item. In 1930, the Manischewitz issued a cookbook called “Tempting Kosher Dishes.” In it, they gave a recipe for Matzo Balls using their matzo meal; the recipe was called “feather balls, Alsatian style.”

“Isn’t there any other part of the matzo you can eat?” — Marilyn Monroe, on matzo balls.

In Yiddish, called “knaidelach”, which means “dumplings”. “Knadle” is the singular.

This web site generates income from affiliated links and ads at no cost to you to fund continued research · Information on this site is Copyright © 2023· Feel free to cite correctly, but copying whole pages for your website is content theft and will be DCMA'd.
Tagged With: Jewish Food