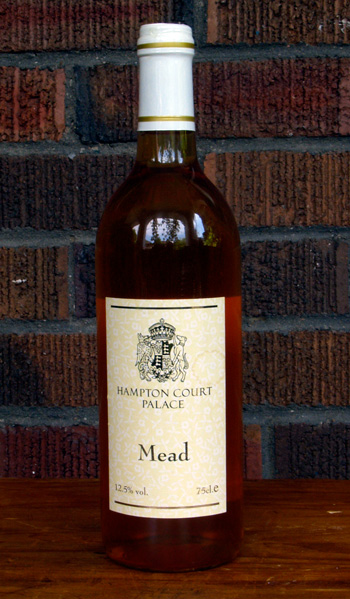 Mead is an alcoholic drink based on honey.

Honey is mixed with water to form what is called a “must.” Flavourings such as hops, fruit or spices are added, along with yeast. The mixture is then allowed to ferment, and then is bottled.

Most traditional recipes (i.e. medieval) call for the water and honey mixture to be boiled. There were perhaps at least two purposes to this: to clarify the mixture (scum will rise to the top, which can be skimmed off if desired), and two, to kill any wild yeasts present in the honey. At a minimum, traditionally, at least the water on its own would often have been boiled first.

Modern mead makers prefer not to boil the honey, feeling that the boiling destroys the aromatics in the honey. Instead, they will add chemicals to kill any wild yeasts. They then add their choice of brewing yeast to help the the fermentation along. Yeasts used will be the same as those used to make wine. Most modern recipes advise letting the mixture cool to around 70 – 80 F (21 to 27 C) before adding yeast.

The mixture is then allowed to ferment before bottling.

Mead is slower to ferment than beer, which can be fermented in 2 or 3 weeks. Mead often takes months. Honey doesn’t have the same kind of nutrients in it that grape or grain do for wine and beer, so fermentation is slow. Yeast nutrients are often added to the mix to help speed the yeast along. Some speculate that in times gone by, pollen or royal jelly in the honey may have acted as yeast nutrients.

Because Mead is so slow to ferment, it can often keep on fermenting even after it appears done. This often leads to further fermentation once bottled, and results in either sparkling Mead — or exploding bottles. A better way to make sparkling Mead is to let the Mead finish completely fermenting in the vat, then prime each bottle with a bit of sugar to allow a small amount of fermentation in the bottle to happen. Treat it in opening as you would a bottle of sparkling wine.

Mead can be stored for a long time; sometimes up to months or years.

In America, Mead is classed as a wine, because it is deemed closer to wine than beer. Unlike wine, though, which is classified based on what kind of grape it is made from, mead isn’t classified on what type of honey it’s made from. Not many commercial makers seem to indicate on their labels what type or types of honey were used. Home enthusiasts swear that using blends of honey adds to the complexity and taste balance, and will usually indicate to others what was used.

The sweetness of the resulting Mead depends on how much honey is used, and how vigorous the yeast was at converting it to alcohol.

Fans recommend using stronger tasting honeys for sweet meads or for Metheglin Meads (the ones flavoured with spices), and milder honeys for dry meads or Melomel Meads.

The above flavours can be made in any of the following strengths:

Mead continued to be popular, though, in parts of northern Europe where great quantities of grapes or hops couldn’t be reliably grown.

Beekeepers not only made their income from honey, but also from its by-product, beeswax, which could be used for candles. As a mixture of honey and wax remain after the pure honey and pure beeswax is collected, some recipes evolved to make Mead from this mixture.

“Chouchen” is the word used in Brittany, France for “mead.”

This web site generates income from affiliated links and ads at no cost to you to fund continued research · Information on this site is Copyright © 2022· Feel free to cite correctly, but copying whole pages for your website is content theft and will be DCMA'd.
Tagged With: Ancient Greece, Mead