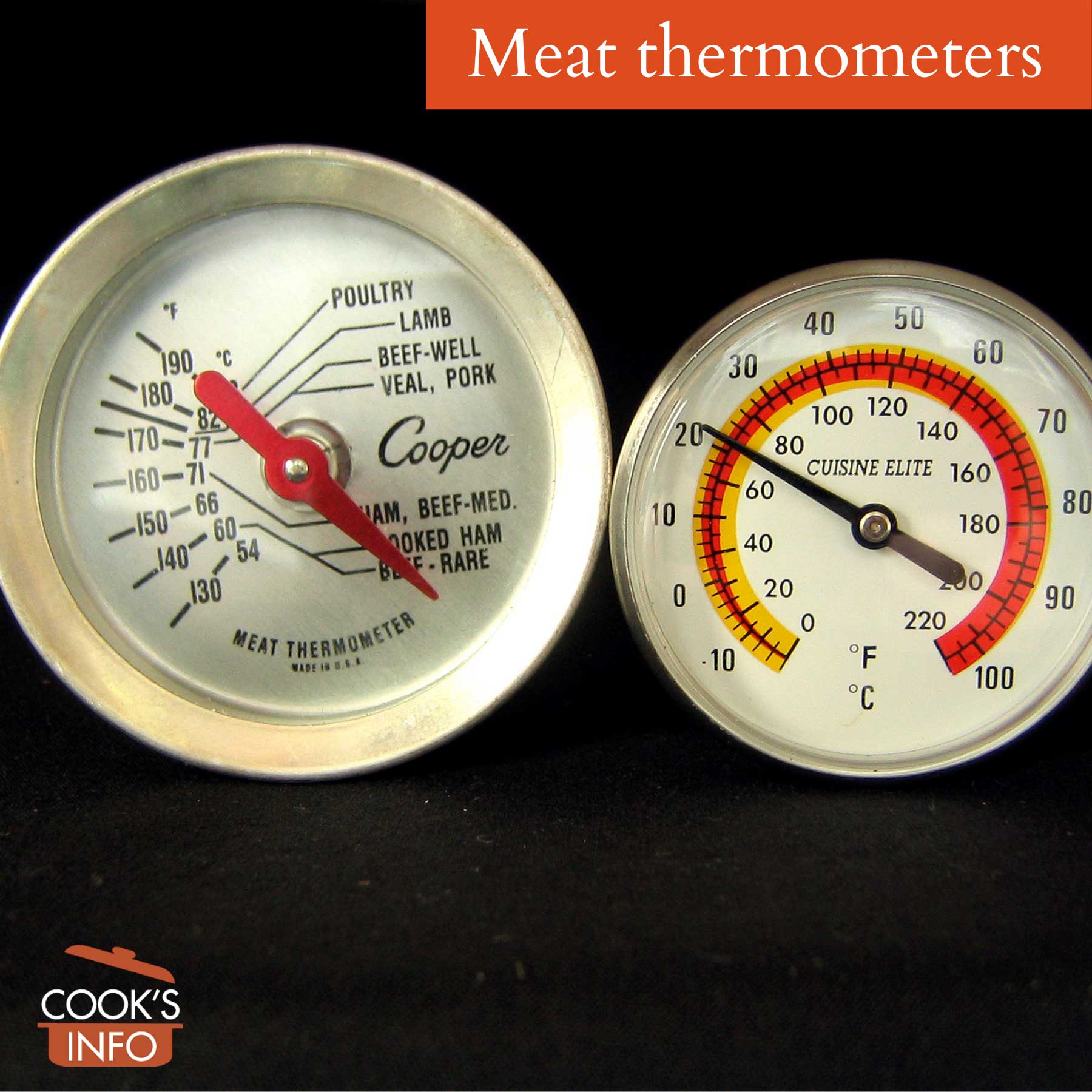 A meat thermometer is used to gauge the temperature of meat being cooked to see if it is fully and safely cooked.

They are very inexpensive and easy to use. Having one not only helps you be certain that you will serve properly-cooked and safe meat to your family and friends, it also means you won’t have to overcook meat to be certain of that.

Insert meat thermometers into the deepest part of the meat, without inserting into fat or touching a bone (as both will give you a temperature higher than the rest of the meat actually is). If you’re doing thin food, such as sausages, then come in at them sideways in through the end.

Even though your meat thermometer may tell you that meat such as chicken or pork is done, the meat may still look pink. You can do two things:

You need to check your meat thermometers periodically, because over time they can corrode inside the stem and become inaccurate. To tell if your thermometer is reading correctly, boil some water and stick the thermometer in it. It should read 100 C (212 F) — or whatever the boiling temperature of water is for your altitude.

When meat is cooking, it takes at first forever for the internal temperature to rise, but towards the end of cooking, the temperature increases are by leaps and bounds.

Internal temperatures of thick cuts of meat can rise as much as 5 C (9 F) after you remove them from the heat.

The United States Department of Agriculture (USDA) says 1 in 4 hamburgers is brown in the middle before it is actually safe to eat.

There are two main types “mechanically-speaking” of meat thermometers: digital and analog. (Some mercury ones are also available.) The digital ones require batteries. The analog ones work by bimetallic coil spring. They don’t have mercury in them, so they don’t look like a traditional thermometer. Fancier ones are a probe that you insert into the meat before starting to cook, and cook with the meat. They either feed the temperature to a thermometer outside the oven via a long cord that snakes out of the oven, or send the temperature wirelessly to a pager on your belt and “page” you when your dinner is ready.

Make sure you know what kind you have: the biggest problem people have with meat thermometers is putting an instant read one into the oven, and finding that it has melted all over their roast. Very few meat thermometers have on them whether they are instant read or oven. People very experienced with them can usually tell at a glance, but otherwise generally only the person who bought it and had access to the packaging knows. If a neighbour doesn’t have a meat thermometer and needs to borrow one from you, make sure that they understand what kind it is, oven or instant, and how to use it. If you are buying one, read the packaging to make sure you know what kind you have before you toss the packaging out. The oven types generally have sturdier looking dials.

If a recipe just calls for a “meat thermometer” and has you put it into the oven, assume they mean the old-fashioned kind of heat proof thermometers. You can use an instant read one instead — though not, of course, by putting it in the oven with the meat.

Disposable meat thermometers are single-use temperature indicators that give you an idea of the temperature range a piece of meat being cooked is at. 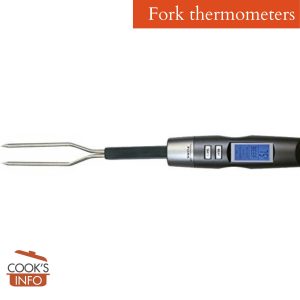 A fork thermometer is a digital thermometer built into a large fork. These are designed for people who are grilling (barbequing.) 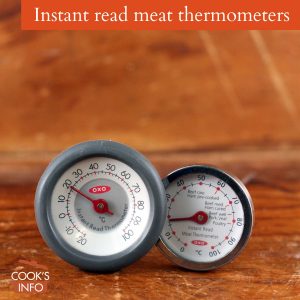 Instant read meat thermometers are thermometers that give you nearly instantly the internal temperature of meat that is being cooked.

Oven cord meat thermometers are thermometers that let you check the temperature of something cooking in the oven without opening the oven door. 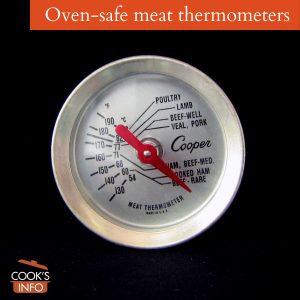 Oven safe meat thermometers are meant to be inserted into meat before the meat is placed in an oven to cook. 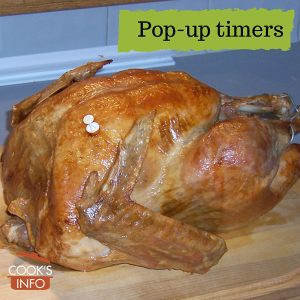 Pop-up timers are devices designed to let you see visually when a piece of meat has reached a certain state of doneness during cooking. There's a spring inside them, which is held in place by a substance which melts at the right temperature, releasing...
This page first published: Oct 24, 2003 · Updated: Nov 12, 2020.