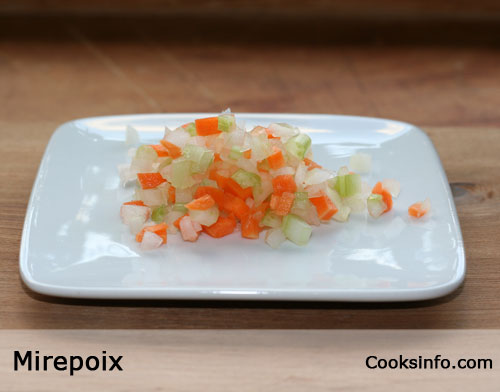 Sometimes a mirepoix is added directly to a dish; sometimes it is gently fried first, which evaporates some of the water in the mirepoix and concentrates and melds the flavours. It should never be browned: the goal is to apply enough heat to bring out the sweetness in the vegetables, but not to change the taste by carmelizing them.

A similar, more loosely-defined mixture in Italian cooking is called a “battuto.”

In France, there are actually two main combinations of mirepoix.

“Mirepoix au maigre” (lean mirepoix) is an all-vegetable combination. It was originally meant for use on meatless days (lean or “maigre” days, according to the Catholic Church calendar.) It is now used mainly for shellfish dishes (particularly à la bordelaise), braised vegetable dishes, and some white sauces.

Sometimes this is referred to casually as “brunoise” but that can be confusing as brunoise actually refers to a particular dice size.

The second combination is “mirepoix au gras”, a combination with a very small amount of chopped meat added to it. See separate entry.

You may see some variations calling for parsnip or celeriac (celery root.)

Fry the mirepoix gently until it softens and caramelizes a bit, then boil briefly in water. Strain if necessary.

The term “mirepoix” first starts appearing in culinary writings in the early 1800s. In 1814, the restaurateur Antoine Beauvilliers (1754 – 1817) directed it to be made with carrots, onion and a bouquet garni. Careme in the 1830s did the same.

The Penguin Companion to Food says,

“It is not until the 19th century that the term is encountered regularly in French culinary texts. Beauvilliers, for instance, in 1814, gives a short recipe for a Sauce à la Mirepoix which is a buttery, wine-laced stock garnished with an aromatic mixture of carrots, onions, and a bouquet garni. Carême, in the 1830s, gives a similar recipe, calling it simply Mire-poix; and, by the mid-19th century, Gouffé refers to a mirepoix as “a term in use for such a long time that I do not hesitate to use it here”. His mirepoix is listed among essences and, indeed, is a meaty concoction (laced with two bottles of Madeira!), which, like all other essences, was used to enrich many a classic sauce. By the end of the 19th century, the mirepoix had taken on its modern meaning and Favre, in his Dictionnaire universel de cuisine (circa 1895, reprinted 1978) uses the term to describe a mixture of ham, carrots, onions, and herbs used as an aromatic condiment when making sauces or braising meat.”

By the end of the 1800s, it had largely taken on its current, modern meaning, though there were still outliers calling for more elaborate versions.

“Cut two pounds of fillet of veal, one pound of fat bacon, one pound of lean ham, four carrots, four onions, all into dice; pass off the whole with one pound of fresh butter, some whole parsley, a handful of mushrooms, two shallots, the least particle of garlic, a bay-leaf, a little thyme and basil, two cloves, a blade of mace, and a little pepper. The whole drawn over a slow fire, add the flesh of two lemons sliced thin (removing the pips), three ladlefuls of consommé, and half a pint of good white wine; simmer the mirepoix for two hours, and squeeze it through a tammy. Use this for entrees directed to be prepared ‘a la mirepoix.'” — George Augustus Sala (1828 – 1895). The Thorough Good Cook. 1896. Sauces: 40. Mirepoix.

One theory holds that Mirepoix is named after the 18th century Duke of Mirepoix.

Alan Davidson, in his Penguin Companion to Food, writes: “Charles-Pierre-Gaston-François de Lévis, Duke of Mirepoix (1699 – 1757) …. had one claim to fame; he gave his name to ‘a sauce made of all kinds of meat and a variety of seasonings.’…. Grimod de la Reynière (1808) confirms the gastronomic pretensions of the hapless Duke when he cites a quail dish a la Mirepoix and claims that it was the invention of the deceased Maréchal.” [3]Davidson, Alan. The Penguin Companion to Food. London: The Penguin Group, 2002. Page 169.

The Larousse Gastronomique of 1977 makes no mention of the Duke, but the 1988 edition does, though the credit goes more to his cook: “A culinary preparation created in the 18th century by the cook of the Duc de Lévis-Mirepoix, a French field marshal and ambassador of Louis XV.” [4]Lang, Jennifer Harvey, ed. Larousse Gastronomique. New York: Crown Publishers. English edition 1988. Page 687.