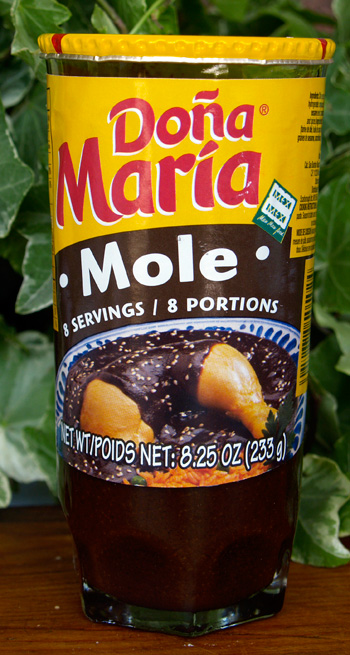 A Mole (pronounced (mo – leh) is a Mexican sauce, and no, it does not contain any small, burrowing animals. In English, it is often written with a capital M to distinguish it from the furry animals; other times, well-meaning English speakers invent an accent for it and spell it Molé, which is wrong. The word “Mole” means “sauce”, and consequently Mexicans wouldn’t say anything redundant like “Mole sauce” or “Mole salsa.” Mole sauce, however, is a convenient term for English speakers to clarify that no small furry animals were harmed in its making.

Moles (pronounced moh-lehs) are sauces that are usually a dark reddy-brown colour, but that can also be green, red or yellow. Dishes made with a Mole sauce usually add Mole at the end of their names.

Mole is a bit of a fusion food. It came about in the late 1600s. The chiles and chocolate are native to the New World, but the spices are native to the Old World. Most stories about its “invention” centre around the Santa Rosa Convent in Puebla de los Ángeles, Mexico.

There is no one single Mole, it is rather a term used to describe a group of sauces: there are at least 40 different types of Mole. Though many versions use chocolate as a spice, the sauce won’t taste like chocolate. In fact, no one taste should stand out from the others. A good Mole has very complex layers of flavour. A Mole should be spicy with just a subtle bit of heat. Any chile used in it should never be so searingly hot that it overpowers other tastes in a dish. Dark-brown and reddy Moles will be earthy tasting.

The liquid used can be a stock or plain water. The texture should be very smooth.

Many Mole sauce recipes are very labour-intensive and time consuming. For that reason, many shortcuts are now available in Mexican grocery stores. You can buy Mole powder in tins, or Mole paste in jars that you add liquid to. The pastes are usually available for the Poblano, Negro and Colorado types of Moles. You can also buy jars of Mole that are completely ready to use, just open, pour, heat and serve, the way we buy pasta or curry sauces. In Mexican markets, Mole pastes that you add water to are sold in plastic bags. Many commercial bottled Mole sauces can be somewhat sweet, but in general, a Mole sauce is not meant to be sweet.

Two well-known dishes that use Mole sauce are turkey ones: “Pavo in Mole Poblano” and “Mole Poblano de Guajolote.”

Just to the south of Mexico city, the town of San Pedro Actopan holds a National Mole Fair every year.

The two main centres of Mole sauces are today the states of Oaxaca, and Puebla. Seven different Moles originated in the state of Oaxaca alone:

A red Mole sauce made with ground peanuts and tomatoes.

This is one of the few Mole sauces meant to be sweet. The recipe includes bananas and plantain.

Mole Negro, “black Mole”, is actually a very dark brown. It’s made with at least 3 types of dried chiles, and chocolate.

The dark, reddy-brown Moles are usually “Mole poblano.” These are the ones that most non-Mexicans have in mind when they say Mole. It’s a thick sauce that uses pasilla chiles, either dried or dried and powdered. Pasilla chiles are mild by Mexican standards; medium-hot by most English-speaker’s standards. In addition to the pasillas, a Mole poblano uses unsweetened chocolate, toasted pumpkin seeds, onion, garlic, coriander, and either tomato or tomatillo.

Debate rages even among Mexicans whether you should use the totally unsweetened Mexican chocolate, or the more readily available slightly-sweetened ones. It just depends on your recipe, and / or your taste.

The “poblano” in its name comes from the word for town, “puebla.”

If you’re going to make a Mole sauce, you might as well make a huge batch, and freeze what you don’t need right now. There are also recipes for Mole pastes, which take up less room in the freezer: you add the liquid to them as you thaw them and use them.

The seeds and the ribs are always removed from chiles before using them in a Mole.

English speakers debate whether to recommend the “e” at the end be pronounced “leh” or “lay.” Technically, it is sort of in between.

This web site generates income from affiliated links and ads at no cost to you to fund continued research · Information on this site is Copyright © 2023· Feel free to cite correctly, but copying whole pages for your website is content theft and will be DCMA'd.
Tagged With: Mexican Food, Mexican Sauces