×
You are here: Home / Archives for Mexican Sauces

There are two different kinds of Adobo Sauce; one is Mexican and the other is Filipino. Both versions have a common base of something acidic such as vinegar, garlic and peppercorns. Mexicans go on to add chiles (often ancho chiles) and herbs; the Filipino version goes on to add soy sauce. Some Filipinos will also…

END_OF_DOCUMENT_TOKEN_TO_BE_REPLACED 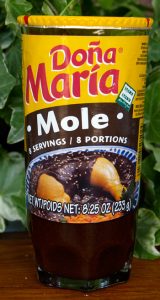 A Mole (pronounced (mo – leh) is a Mexican sauce, and no, it does not contain any small, burrowing animals. In English, it is often written with a capital M to distinguish it from the furry animals; other times, well-meaning English speakers invent an accent for it and spell it Molé, which is wrong. The…

END_OF_DOCUMENT_TOKEN_TO_BE_REPLACED

Pipián Paste is a rich, thick, reddish-brown mole sauce made in Mexico used for pork, poultry, seafood and vegetables. It is made from dried chile peppers such as pasilla and ancho (or mulato), cloves, garlic, oil, toasted pumpkin seeds, roasted peanuts (some recipes just call for peanut butter now), toasted sesame seeds, A green variety,…

END_OF_DOCUMENT_TOKEN_TO_BE_REPLACED 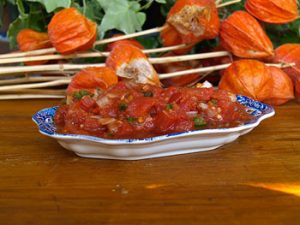 Salsa means sauce, in Spanish. Though the Spanish do make sauces, generally when you see the word Salsa there will be a Mexican sauce involved. There are raw sauces and cooked sauces. If you see the word “cruda” in the name of a Salsa recipe, “cruda” means “raw” in Spanish. You can buy commercially prepared…