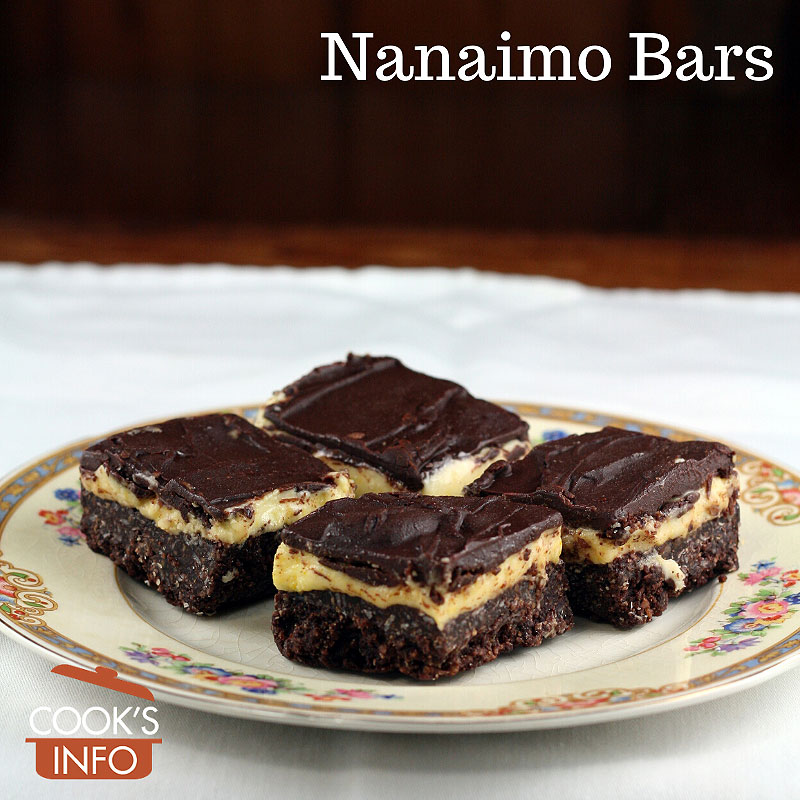 Nanaimo bars are a Canadian dessert bar that requires no baking. They are named after Nanaimo, British Columbia.

You can buy Nanaimo already made in many grocery stores.

There are many variations of Nanaimo bars now, such as mint, peanut butter, cherry, pina colada and even Grand Marnier, but in everyone’s mind, the default bar is always the classic one, and many people wouldn’t like anyone messing with it.

Essentially, the dessert is a very sweet home-made candy bar. The bars can be sweet enough to make your teeth ache.

The bottom layer is firm but crumbly, made from Graham wafer crumbs mixed with coconut and chopped walnuts. The middle layer is a vanilla custard; the top layer is melted chocolate that is allowed to set and harden.

It is probably not that great an exaggeration to say that Nanaimo bars partly drive the sales of custard powder in Canada. American versions call for instant vanilla pudding, owing to custard powder being hard to find in the United States except by special order.

To cut into Nanaimo Bars without cracking the top layer of chocolate, refrigerate bars until the top chocolate layer is firm — about an hour. Take two knives, and put them in a measuring jug filled with very hot water (pick one stable enough that won’t tip over.) Take the squares out of the fridge. 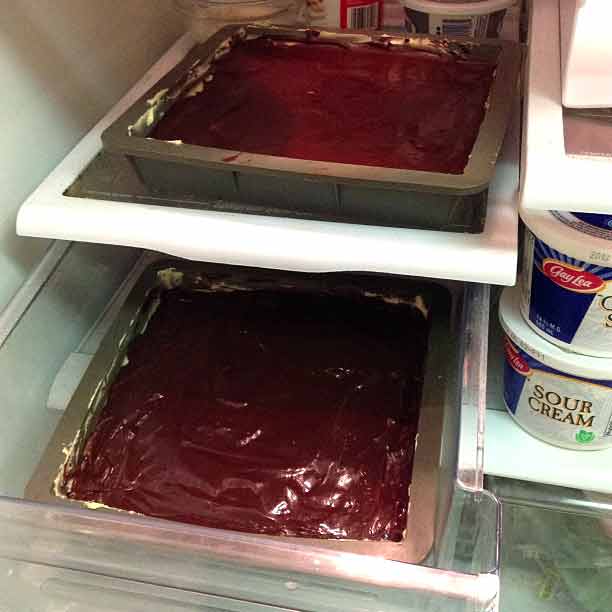 Nanaimo Bars are not mentioned at all in “Nanaimo, A Short History” by Patricia M. Johnson (first published 1958, revised 1974) which despite modestly portraying itself as “short” was actually quite comprehensive. It’s odd that in 1958, and even in 1974 when Johnson revised her history, she didn’t feel that Nanaimo Bars were significant enough to mention. She laboured over every aspect of this British Columbia’s town’s history, covering even its quirky continuing observance of Guy Fawke’s Day. It seems that the bars just did not figure highly in the town’s consciousness until a 1986 contest to promote the bars (more about that shortly.)

Some of the wilder stories about the origin of Nanaimo Bars have people making the bars in England, and sending them by post to their relatives working in Nanaimo’s coal mines. The story doesn’t work, though. The coal mines in Nanaimo had their heyday in the second half of the 1800s, and this is when the workers immigrated over from England. At a time when parcel shipping took months, any such recipe must have been a substantially different one for the custard filling not to spoil and the chocolate not to melt in the long transit — especially without refrigerated shipping.

In fact, Nanaimo Bars can’t go back much further than the 1920s or 1930s, for one simple fact: making them requires refrigeration, or at least, an icebox. But, with space in an actual icebox at a premium (iceboxes were not that large), the squares probably wouldn’t have become popular until more people had proper electrical refrigerators. Figures for Canada are unavailable, but it was only in 1930 that in America refrigerators had come down enough in price to start outselling iceboxes. Before then, an ordinary household would only have regarded a refrigerator as a pipe-dream.

Investigations into the origins of Nanaimo Bars appear to centre around the following list of names:

This recipe is often bandied about as a possible first version of Nanaimo Bars. Writers quoting it will say that it possibly appeared in a 1930 copy of the Vancouver Sun newspaper, but as no date or actual recipe is given, it is impossible to compare how close the recipe is to what we know as Nanaimo Bars. With a date of 1930, though, it’s surprising it wouldn’t have been called “Chocolate Icebox Cake”, given how low the penetration of fridges was in Canada at that point.

Reputedly, a Dairy Food Service Bureau (though it’s never stated which one — for a company? for a government?) gave a slightly modified version of a recipe called “Dominoes”, saying that the middle layer of filling should be piped on in dots, so that when the bars were sliced, a domino pattern would appear — but given the directions are for the bars to be sliced sideways, not horizontally, it’s difficult to know how this would work visually, even if it were a Nanaimo Bar precursor.

“Miracle Bars” is mentioned occasionally by some writers as the name of a recipe that is the same as Nanaimo Bars. However, to date CooksInfo.com has found no such recipe in print.

New York Slice is often quoted as an alternative name, but CooksInfo.com to date has only been able to find one or two instances of “New York Slice” that doesn’t involve pepperoni, and those are in passages mentioning them as alternative names to Nanaimo Bars, but with no recipes provided to back up the assertion. People in New York seem completely unaware of any square by this name.

No evidence has been found or provided to back the occasional assertion of this as an alternative name.

Recipes for Smog Bars are identical to those for Nanaimo Bars. Variants also exist as “London Smog Bars” and “London Fog Bars”.

One person may have the definitive answer, or as definitive as it’s going to get, as to where Nanaimo Bars come from.

That person is the undisputed queen of Canadian squares, Jean Paré. Published in April 1981, her first cookbook , called “Company’s Coming: 150 Delicious Squares”, has sold over 1 million copies as of 2006. Jean was born in 1927 in Irma, Alberta, population 250, and spent the first 20 years of her life there until 1947. Writing of those years, Jean says categorically that what people now call Nanaimo Bars used to be called “Smog Bars”:

The evidence of Jean Paré, as reputable and sharp a witness as there can be to squares in Canada, dates what are now-called Nanaimo Bars back to at least the late 1920s, early 1930s in Alberta.

Perhaps alternative names of “London Smog Bars” and “London Fog Bars”, reflecting the English Bird’s custard, somehow conjured up in someone’s mind the tale of the bars being sent to coal miners from England.

Perhaps, some people speculate, the “fog” part of the alternative name “Fog Bars” came about from the three-layered Fog Bar weather symbol introduced in 1942 by the US Weather Bureau.

By the 1950s, the name of the dessert previously called “Smog Bars” was being changed to Nanaimo Bars.

A recipe very similar in all but name to Nanaimo Bars of today appeared in 1952 in the The Woman’s Auxiliary to the Nanaimo Hospital Cook Book as “Chocolate Slices”, submitted by a Mrs. E. MacDougall. (There were also two very similar recipes called Chocolate Squares.) Reputedly, the recipe then next appeared a short while after in the Vancouver Sun newspaper under the name of Nanaimo bars (according to Carol Ferguson in her 1992 book “A Century of Canadian Home Cooking”, but sadly Ferguson provides no backup.)

The recipe’s next known appearance, under the name “Nanaimo Bars”, appears to have been in The Lethbridge Herald” in Alberta in January 1954 (recipe and cite provided in Literature and Lore section below.) The recipe appeared a few years later again under the name Nanaimo Bars (submitted by a Joy Willgress) in “Favorite Recipes, Compiled by the Women’s Association of the Brechin United Church” (Nanaimo, British, Columbia. 1957-58; p.52.) It was an exact reprint of the 1952 “Chocolate Slices” recipe in the The Woman’s Auxiliary cookbook, just with the name of Nanaimo Bars” pasted on it. The recipe then later appeared with the name Nanaimo Bars in 1958 in the “British Columbia Women’s Institute’s Centennial Cookbook” (Greenwood Press. Page 171. 1958.)

In 1986, a contest was held by a newspaper in Nanaimo, British Columbia, to find the best Nanaimo Bar recipe. The contest was encouraged by the mayor at the time, Graeme Roberts. He recorded in 1986 how he got the idea:

“And just to put the record straight it wasn’t a meeting with the mayor of New York that prompted all of this. In 1985, I was in Seoul, Korea, on a trade mission with B.C. premier Bill Bennett and a group of business executives. Returning to the hotel one evening after dinner, I walked into the newsstand and started talking to a woman there about what part of the world we were each from. When I told her I was from Nanaimo, B.C., she responded, ‘Is that where Nanaimo bars are from?’

‘Of course,’ I said. Turns out that she was the cooking editor of The Los Angeles Times, so she began to ask me about the source of Nanaimo bars, the true recipe and where and when they had come into being.

Even as mayor and having resided in Nanaimo for a number of years, I was unable to answer most of her questions. However, I promised her I would not only send her the information but would accompany it with the ‘Ultimate Nanaimo Bar Recipe.’ Upon my return to Nanaimo, I convinced city council to join me in staging the search.” [4]Roberts, Graeme. Letter to the editor of the National Post (Toronto: Canada) , published Friday, 7 July 2006, in response to “The Woman Behind The Official Recipe”, National Post, 30 June 2006.

The ensuing contest was won by a Joyce Hardcastle. Her recipe differed in a few small ways from the 1952 Woman’s Auxiliary recipe (and its copy, the 1957 Women’s Association recipe.) Graeme Roberts declared Hardcastle’s recipe to be the “Official” recipe. Hardcastle’s recipe swapped almonds in for the walnuts. However, even though walnuts were bested by almonds in this contest, they have remained firmly the nut of choice in the recipe today. 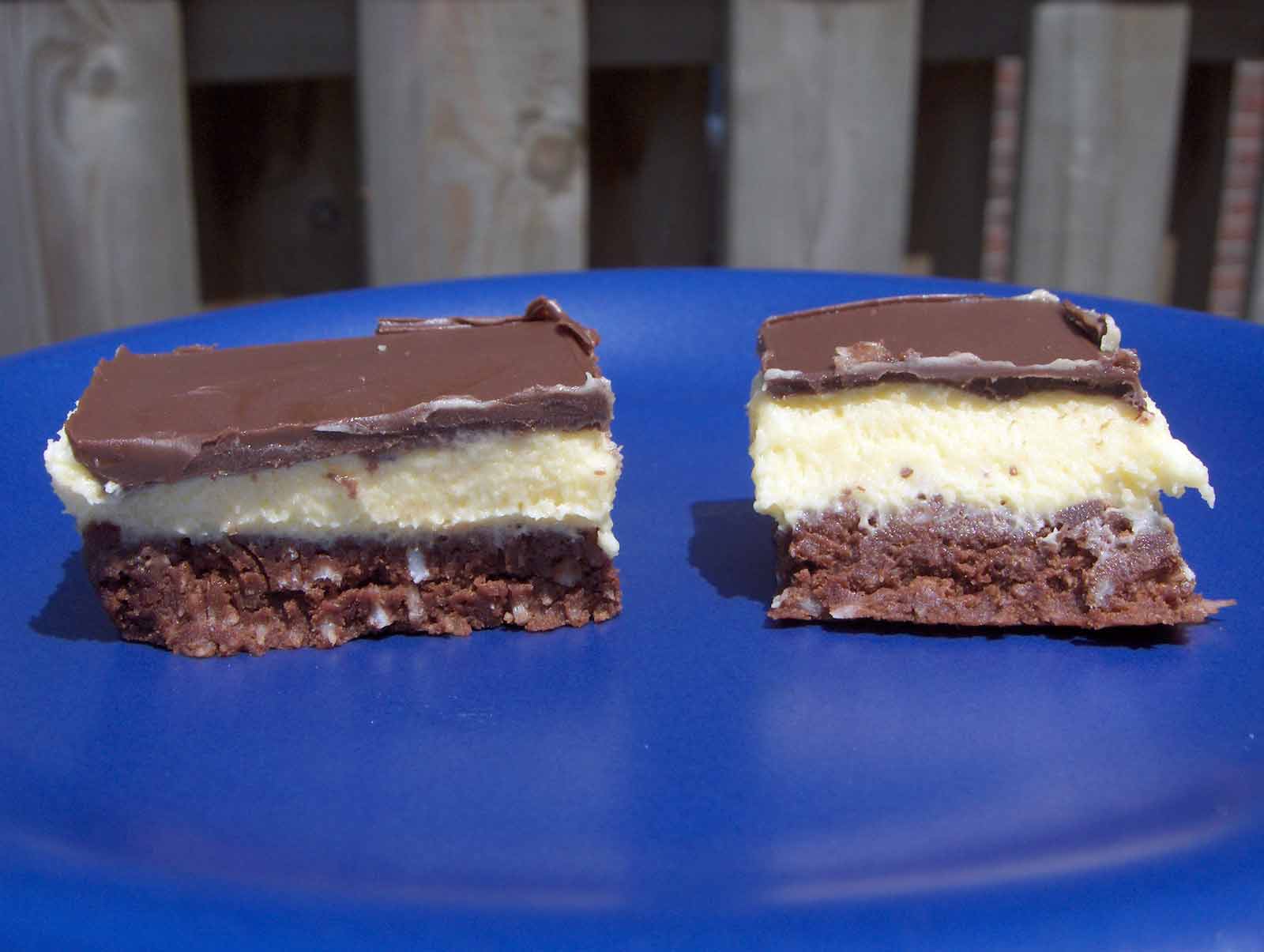 Place softened butter, sugar, cocoa, vanilla and egg in bowl. Set the bowl in a dish of boiling water. Stir well until butter has melted and mixture resembles thin custard.

Icing – Cream ¼ cup butter, add 3 tablespoons milk which has been combined with 2 tablespoons vanilla custard powder. Blend in 2 cups icing sugar. Spread over chocolate base, let stand about 15 minutes or so to harden somewhat.

“One of the most popular dainty recipes around appears to be the one requested by Mrs. R.T. She called it a New York slice. Many readers sent in answers to her request, but it goes by such a variety of names (Nanaimo Bars, Parksville Squares, Duncan Bars) I’ve simply named it: POPULAR CHOCOLATE SLICES.” — Larson, Evelyn. The Kitchen Hot Line. Winnipeg, Manitoba. Winnipeg Free Press. Saturday, 30 April 1977. Page 25.

Nanaimo is a city on the south-east coast of Vancouver Island, British Columbia, Canada, on the Strait of Georgia.

Blank, Kim. “The History and Mystery of the Nanaimo Bar: Facts, Myths. The Truth is Out There, But We Just Can’t Find It”. Victoria, British Columbia. Accessed 15 August 2006 from http://www.expage.com/page/nanaimobar.

Ward, Jennifer. In a Dessert, the Soul of Canada. The Atlantic. February 2010. 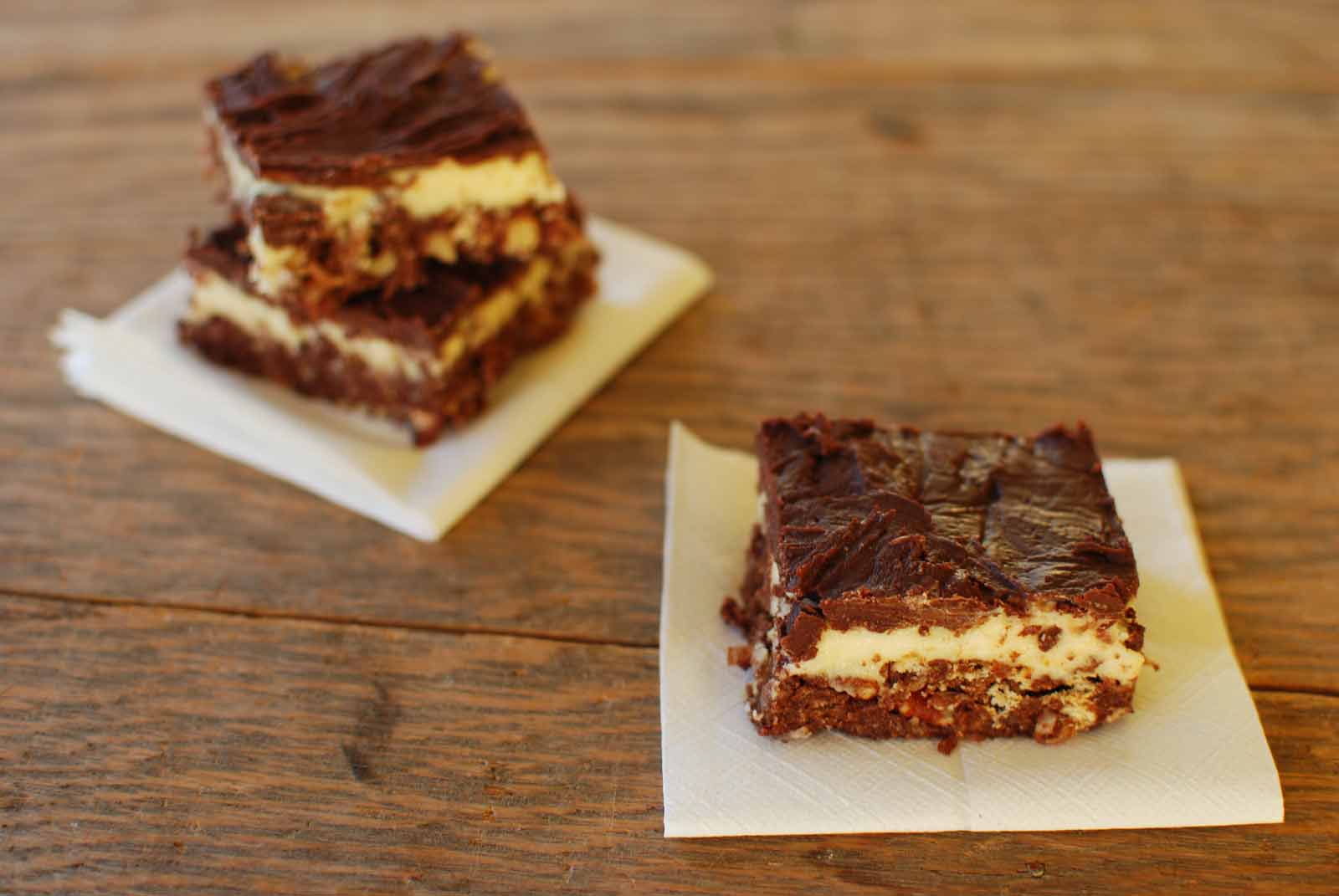