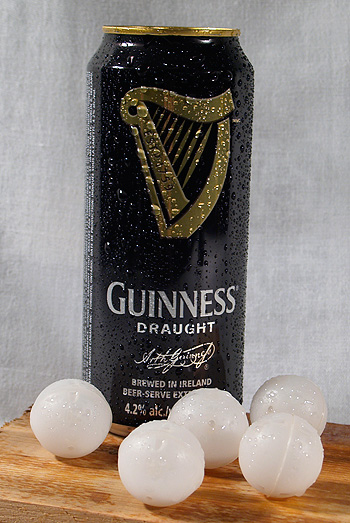 Nitrogenated Beer is beer that has been infused with a mixture of 25-30 percent nitrogen and 70-75 percent carbon dioxide. In the beer trade, they may be referred to as “Nitrobrews.”

Nitrogen bubbles are more stable than carbon dioxide bubbles, because the atmosphere is already about 79 percent nitrogen. Consequently, a longer-lasting head is produced on the beer when poured. The head is also creamier, because the bubbles are finer than carbon dioxide bubbles. A perception of reduced bitterness is also created on the beer-drinkers tongue.

Nitrogenated Beer can be sold in kegs to pubs, or in cans.

In order to serve Nitrogenated Beer, a pub has to set up a system for mixed gas and install a special faucet.

The mixed gas blend is more expensive than just straight-up carbon dioxide, about 27 to 48 cents a keg (1999 prices) compared to 16 cents.

The special faucet required, sometimes called a “stout faucet,” has a plate in it with small fine holes. The beer is forced through these fine holes at around 30 psi (pounds per square inch.) This causes the nitrogen to break out of the liquid, forming zillions of very fine bubbles that give a denser, creamier head than carbon dioxide does.

In contrast, taps designed just for carbon dioxide beer are designed to prevent the gas breaking out of solution, which would cause way too much foam because carbon dioxide produces much larger bubbles.

Cans of Nitrogenated Beer are meant to be poured into a glass, not drunk straight out of.

What makes the nitrogenation in cans work, in terms of delivering its effect, is a small device called a “widget” added inside the can. It’s this widget that causes the nitrogen to form thousands of fine bubbles, causing the creamy head as the beer is poured.

Widgets are usually plastic, but aluminum ones are also available which make recycling the can easier.

Different beer makers use different widget designs, but they all have several small valves in them. The first widget Guinness used for its stout was attached to the bottom of the tin, but now uses a free-moving one instead, like most everyone else.

A widget is put into a can, then the can is filled with the beer. The nitrogen can be mixed into the beer under pressure before it goes into the can, or a small drop of liquid nitrogen can be added to the beer once it is in the can. The can must be larger than the volume of beer it holds, to allow headspace for the gas. The can is sealed right away, because liquid nitrogen has a very low boiling point of −321  F (−196 C), so it actually boils when added to the beer because the beer of course is far warmer than that! This boiling creates pressure in the sealed beer can, forcing some beer into the valves of the widget.

When you as a consumer open that can, that allows the high pressure in the can to escape, lowering the pressure in it. The beer that was trapped by force in the widget expands in the new sudden lower pressure. This expansion forces it back out of the widget’s valves in a surging jet, disturbing the beer around it. Nitrogen bubbles form around this disturbance, and a chain reaction happens in seconds, filling the beer with zillions of tiny bubbles. And voilà, the creamy head on your beer.

If your can of Nitrogenated Beer is too cold, you’ll get almost no head on the beer. If it’s too warm, you may get too much head. The middle-ground of well-chilled but not cold is best, because it makes the nitrogen more soluble. Either refrigerate for just a few hours before opening, or, if you keep your cans in the fridge, take the can out of the fridge and let stand at room temperature for about 10 minutes to take the extreme chill off it before opening.

Guinness patented a nitrogen dispensing keg in 1932, but not much happened with it.

Guinness started experimenting with nitrogen again in the 1940s. They found that it caused the beer’s head to be creamier, and to last longer.

The practice was first applied to Guinness Stout in 1964 in bottles. From 1969 to 1984, various methods were tried at Guinness to create draft style beer from a can, none entirely satisfactory. Development work on a widget to do the job was conducted from 1984 to January 1988, and was ultimately successful.

Canned versions of their nitrogenated stout in a widget-equipped can appeared on the market in Ireland in March 1989, in the UK in 1989, and in America in 1991. The new product was a success, actually causing cans of Guinness to outsell bottles of Guinness, even though at the time sales of canned beer in general were falling owing to a perception of them as “inferior.” Other brands of beer shortly after followed suit with nitrogenated products of their own.

The widget-equipped can that Guinness introduced in 1989 had the widget affixed to the inside bottom of the can. This caused problems if consumers opened the can when the beer was warm. The floating widget was introduced by Guinness in 1997 to overcome this issue.

Brew Your Own Magazine. Brew Wizard Section. “Is it possible to bottle nitrogen-charged beer?” March / April 2002.