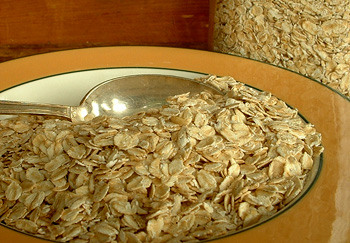 Oats are an annual cereal plant, like wheat. They are very cold-tolerant, and so can be sown each spring as soon as the plough can cut into the soil. Oats are such energetic plants that they will even choke out most weeds that try to take hold amongst them. The plants will grow about 30 inches (75 cm) tall, with each plant producing several stalks of grain heads.

Oats, however, are one of the harder grains to process because the kernels are protected by two inedible, tough husks that take seriously their job of clinging to the kernel. When an Oat is husked, the kernel that remains is called the “groat.” The bran is normally left on the kernel.

Oats contain 3 to 5 times the fat as do other grains, and therefore can go rancid more quickly if they are not steam-treated or don’t have the bran removed, which contains the enzyme that causes the spoilage.

Oatmeal has no gluten-producing proteins and therefore can only be used for heavy breads.

Only about 5% of the world’s Oat crop is consumed as food by humans; the majority of the crop is fed to animals. North America produces half the Oats currently grown in the world (2004.)

Quaker Oats, in Cedar Rapids, Iowa, is the largest cereal company in the world.

Store in a cool place to prevent the fat in Oats from turning rancid.

Though Oats have been known since about 2500 – 2000 BC (they were first noticed as a “weed” getting into the wheat crops), they weren’t really domesticated and farmed on a large scale until towards the end of the Roman Empire. Before that, Greeks and Romans such as Theophrastus and Pliny even wondered if they were a diseased type of wheat.

By 1600, they were very popular in Europe, especially in Britain and Ireland. They were brought to America at the start of the 1600s.

“Poor fellow, never joyed since the price of oats rose; it was the death of him.” — First Carrier in Henry IV, part 1, II, 1. Shakespeare.

“In accordance with the kindly Badger’s injunctions, the two tired animals came down to breakfast very late next morning, and found a bright fire burning in the kitchen, and two young hedgehogs sitting on a bench at the table, eating oatmeal porridge out of wooden bowls.” — Kenneth Grahame, The Wind in the Willows, Chapter 3.

“Oats are a grain which in England is generally given to horses, but which in Scotland supports the people.” — Dictionary of the English Language, Samuel Johnson, 1755.