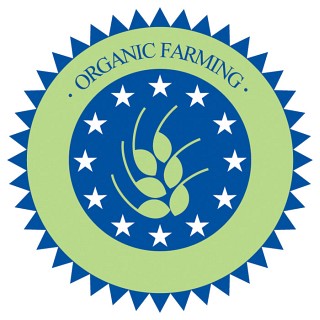 Organic Food is food that is, ostensibly, grown without manmade aids such as synthetic fertilizers, pesticides or fungicides, and processed with no synthetic additives, colouring or flavouring.

Actual legal definition of the word varies wildly from jurisdiction to jurisdiction. In fact, it may be safer to think of it as a marketing term, than a legal term. In the minds of many consumers, organic has become avoidance of certain chemicals, rather than its original broader philosophies such as sustainable farming, composting, rotating the crops, paying decent wages, etc.

Organic food is more expensive, owing to health, taste and nutritional benefit claims that are made in the sale of it.

All-natural does not mean organic.

Whether one tomato is more nutritious, and tasty, than another depends far more on variety, soil grown in, sunlight received, etc., than it does on whether it was grown organically or not.

Organic is not a certification of quality: an non-certified organic pâté, for instance, produced with traditional methods, may be higher in cuisine quality than a certified one.

Note as well that not all organic food is necessarily good for you: an ice cream can be all organic, but that doesn’t mean you should eat a whole tub of it, with organic cookies on the side, all in one sitting.

While there may be scientific backing for claims that the production of organic food is better for the environment, that is not the same as evidence that that particular carrot is more nutritious for your body. Wary of getting caught of making nutritional claims that might end up not being true, and consequently inviting friendly queries from government Food and Drug departments, some companies are instead marketing the “absence” of things, like hormones, pesticides, chemicals, etc.

“On the basis of a systematic review of studies of satisfactory quality, there is no evidence of a difference in nutrient quality between organically and conventionally produced foodstuffs.” [1] That particular review was funded by the UK Food Standards Agency , but the authors assert that “the funding organization had no role in the study design, data collection, analysis, interpretation, or writing of the report.” The study, though, “did not include a review of the content of contaminants or chemical residues.” [2]

A study released in early 2011 by the British consumer association, “Which?”, found that regular broccoli had slightly higher levels of antioxidants compared to the organic sampled, regular potatoes had more vitamin C than the organic, and that regular tomatoes were sweeter, more flavourful and juicier. The taste tests were conducted by 194 professional food analysts, who were not told the object of the tests. “Which?” cautioned that the superiority found in regular vegetables could not necessarily be attributed to them just being “non-organic”; but that it might have been something about the manner in which the regular were grown that had produced the better produce.

In June 2012, however, a study led by Anna Vallverdú Queralt at the University of Barcelona found that tomatoes (Daniela variety) grown without pesticides contain more polyphenols (which have a natural antioxidant effect in humans) than those grown with pesticides. Polyphenols help the tomatoes to fight off disease; tomatoes grown organically, without the aid of pesticides, were forced to activate their own defence mechanisms by producing more polyphenols.

Some consumers just won’t trust that food grown with pesticides are safe to eat, no matter how much they are assured otherwise. “No conclusive evidence shows that organic food is more nutritious than is conventionally grown food. Most experts agree that the amount of pesticides found on fruits and vegetables poses a very small health risk.” [3] The American Cancer Society says there is “no evidence that residues of pesticides and herbicides at the low doses found in foods increase the risk of cancer.” [4]

Both sides — organic backers and “regular” food backers — keep cherry picking what science is currently available. Some organic proponents get frustrated that, when it comes to pesticides, governments seem to say that the risk is so minimal it’s not worth thinking about — but then if one person gets slightly sick, possibly from eating raw-milk cheese, the health authorities will say any risk is unacceptable, and destroy 9 million tonnes of good cheese and bankrupt the producer in court.

If someone who is a scientific expert in pesticide use says they are safe, then the organic side won’t trust him or her, thinking the views influenced and financed by the pesticide industry. On the other side of the coin, anti-pesticide reports from the organic side are often written by scientists or nutritionists already converted to the cause, and can be seen as just as biased.

In 2011, Canadian reporters from the Canadian Broadcasting Company examined records from the Canadian Food Inspection Agency. They reported that the documents showed that in 2009 and 2010, 24% of 178 organic apples tested contained pesticide residue; 0.03 parts per million of the fungicide thiabedazole, which granted still faired better than conventional apples that contained 0.4 parts per million of the fungicide. In 2010 and 2011, 112 various produce samples tested also contained pesticide residue. It’s not that the organic farmers are sneakily using pesticides: the “contamination” can occur through spray drift from neighbouring farms, or during packing and processing at plants where the same equipment is used to handle both organic and non-organic items.

There have been concerns that in focussing on what pesticides might kill people 70 years from now, some producers are overlooking what might kill people tomorrow: “Overall, chickens labeled as organic or raised without antibiotics and costing $3 to $5 per pound were more likely to harbor salmonella than were conventionally produced broilers that cost more like $1 per pound.” [5]

Can you trust organic to be organic?

A former Canadian organic food inspector, Michael Popoff, says that in Canada, the organic certification system is essentially a “self-regulating, honour-based audit trail” owing to lack of standards at the Canadian Food Inspection Agency and in the Canada Agricultural Products Act. There is no testing to ensure honesty or inadvertent omissions. There are no inspectors to monitor the production, let alone any surprise inspections to verify the “organic-ness” of the food being shipped at the end of the day.

Popoff estimated that, aside from the producers whose products ended up not being organic without their knowledge owing to other factors, 10 to 15% of other producers were knowingly falsely stating their products are organic. “I don’t buy organic. I buy a lot of local produce from farmers that I know. Certified organic is completely meaningless. I don’t just come at this because I was an inspector and I was on the inside and saw a few things that bothered me. That just opened my eyes to it. What I see now is an honour-based system and there’s no honour among thieves.” [6]

In the US, some chemical products can be used in organic farming, it just depends how the products were arrived at.

In 2009, Canada and the US reached an organic equivalency agreement that anything certified organic in one country, is certified in the other. The agreement went into effect in June 2009. [8] More than 80% of organic products consumed in Canada are imported from the U.S. In 2011, one study found that only 8 percent of Canadian households said they would pay extra for organic.

Organic farming is less productive than “modern” farming. If all farming in the world went organic, British scientist John Emsley estimates that we’d need to starve 2 billion people to death. Earl Butz, American Secretary of Agriculture from 1971 to 1976, reputedly said something along the lines of “Show me the first 10,000 Americans who are prepared to starve to death and then I’ll do something.” (the quote varies.)

Some environmentalists are concerned that organic farming productivity levels require more land under cultivation, which puts pressure on wildlife habitat areas such as forests, grasslands and rain forests for animals and plants.

“Organic” is a basic article of faith for some people, who are accused of having an almost religious black-and-white view of the world of food.

Celebrity endorsement of “organic”, some people feel, serves only to give organic food an elitist reputation as something for those who wear sandals and drink champagne.

Some people feel that advocacy for organic food, owing to its elevated prices, smacks of just another of the many ways throughout history that food has been used to mark class boundaries. Certainly, sometimes organic food advocates seem to equate one’s ability to pay the higher prices with morality: “What makes the snobbery of the organic movement more insidious is that it equates privilege not only with good taste, but also with good ethics.” [9] Without meaning to, organic advocates can make being poor immoral.

Organic foodies, though, are not necessarily foodies in the old, Julia Child sense of the word. The organic movement can be seen as more of a political and health movement than a foodie movement: “We see ourselves first and foremost as healers.” [10] In this, they can be seen as part of the American way of approaching food as a social, political and religious topic that was begun by Sylvester Graham (1794–1851.)

Parents especially can face the “guilt factor” in not buying organic for their kids — even if they know the kids won’t eat half the food, anyway. Some parents say that they’re happy to pay extra for organic food because it has superior taste which they enjoy, and because they care about the superior nutritional value for their children, and that if that had to, they’d just cut back on vacations to afford it. Other parents say there’s no choice; there’s just no spare room in their budgets for organic equivalents which can easily cost four times as much, and that advice from the “sandal-wearing set” to just cut back on vacation spending doesn’t help when they can’t even afford vacations in the first place. It’s like getting advice to “buy less caviar.”

Accessibility issues price-wise for organic food can be exacerbated when large-public sector organizations — such as universities, hospitals or prisons — contract to buy organic produce. While it is a boon for the growers, because the public sector provides a stable market to sell into, it can empty the marketplace of organic produce for ordinary consumers and push up the costs of it even more.

In 1924, Austrian philosopher Rudolf Steiner (1861 – 1925) delivered a lecture series on what he called “Biodynamic agriculture.” In it, he called on farmers to stop using the new fertilizers that were becoming available. He believed that artificial fertilizers and pesticides were damaging the nutritional value of food. He also felt that spiritual shortcomings in the approach to farming had contributed to this.

The Organic movement got its name in 1942, with the start of the “Organic Gardening Magazine” published by Jerome Irving Rodale (1898 – 1971.)

“The best fertilizer is the farmer’s footsteps.” — This saying was popularized in the the 2000s, and variously credited as either an old Irish or ancient Chinese proverb. However, the earliest date we have found yet for this saying in print is 1993, cited by a Michael Ableman in a piece titled “The world’s traditional farmers and a path to the future.” (In: Earth Island Journal. Summer 1993. Vol 8, No. 3)

Kemp-Jackson, Samantha. Is organic food too costly? Toronto: The Globe and Mail. 10 July 2012.

Leung, Wency. Do you pay more for organic? You might be paying for pesticides. Toronto: The Globe and Mail. 8 December 2011.

Webster, Ben. Organic farming not better for all birds and the bees, say researchers. London: The Times. 5 May 2010.

Wente, Margaret. Organic tastes good, but better for us? No. Toronto, Canada: The Globe and Mail. 20 July 2009.

This web site generates income from affiliated links and ads at no cost to you to fund continued research · Information on this site is Copyright © 2022· Feel free to cite correctly, but copying whole pages for your website is content theft and will be DCMA'd.
Tagged With: Organic, Technical Terms