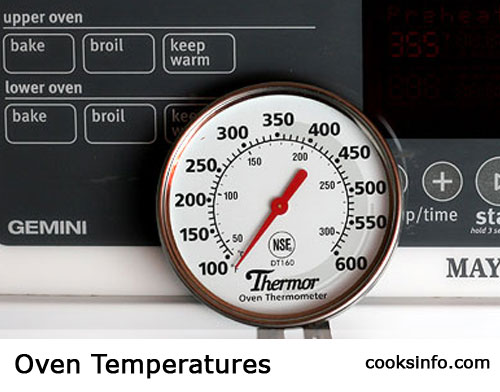 Oven Temperatures can be measured, and given, in degrees, marks or descriptions.

Many French, German, British and Austrian stoves don’t have temperatures, just numbers — gas marks. These are called Marks in English, Thermostat in French, and Stufe in German. Gas Marks and Stufe are normally given for gas ovens; degrees for electric ovens.

A North American, on seeing this system of Gas Marks for the first time, might think they must be wildly inaccurate because they can cover a 10 to 20 degree Celsius temperature difference. You could look at it another way, thought, which is that they are more accurate — or rather, more truthful — than setting a temperature in degrees. Most home ovens are wildly inaccurate, unless someone has come to calibrate yours for you. When you set a temperature to 400 F (200 C), what you are really doing is expressing a wish for an approximate range. An oven thermometer placed in the oven would likely show you that your 400 F setting is getting you anywhere between 375 F and 425 F — a 50 F / 30 C temperature spread — and that the temperature within that spread actually goes up and down almost before your eyes.

The descriptions listed below are those worked out by Martha Stewart. Hers are “more accurate”, in that she works with a broader range of categories, allowing more precision.

Lastly, there is one time honoured convention not mentioned above of measuring oven temperature — which is to stick your hand into it. You measure the temperature based on how long you can hold your hand in. For example, being able to hold it in for between 8 and 12 seconds means the temperature is about 350 F / 180 C, unless you are the bionic man or woman.

The purpose of the table below is just to give an overview of how all these ways of measuring fit together. If you have a recipe from a reliable source that gives different conversions (for instance: E-Herd: 180 Grad, Gas: Stufe 2, Umluft: 160 Grad), follow the conversions provided by the writer.