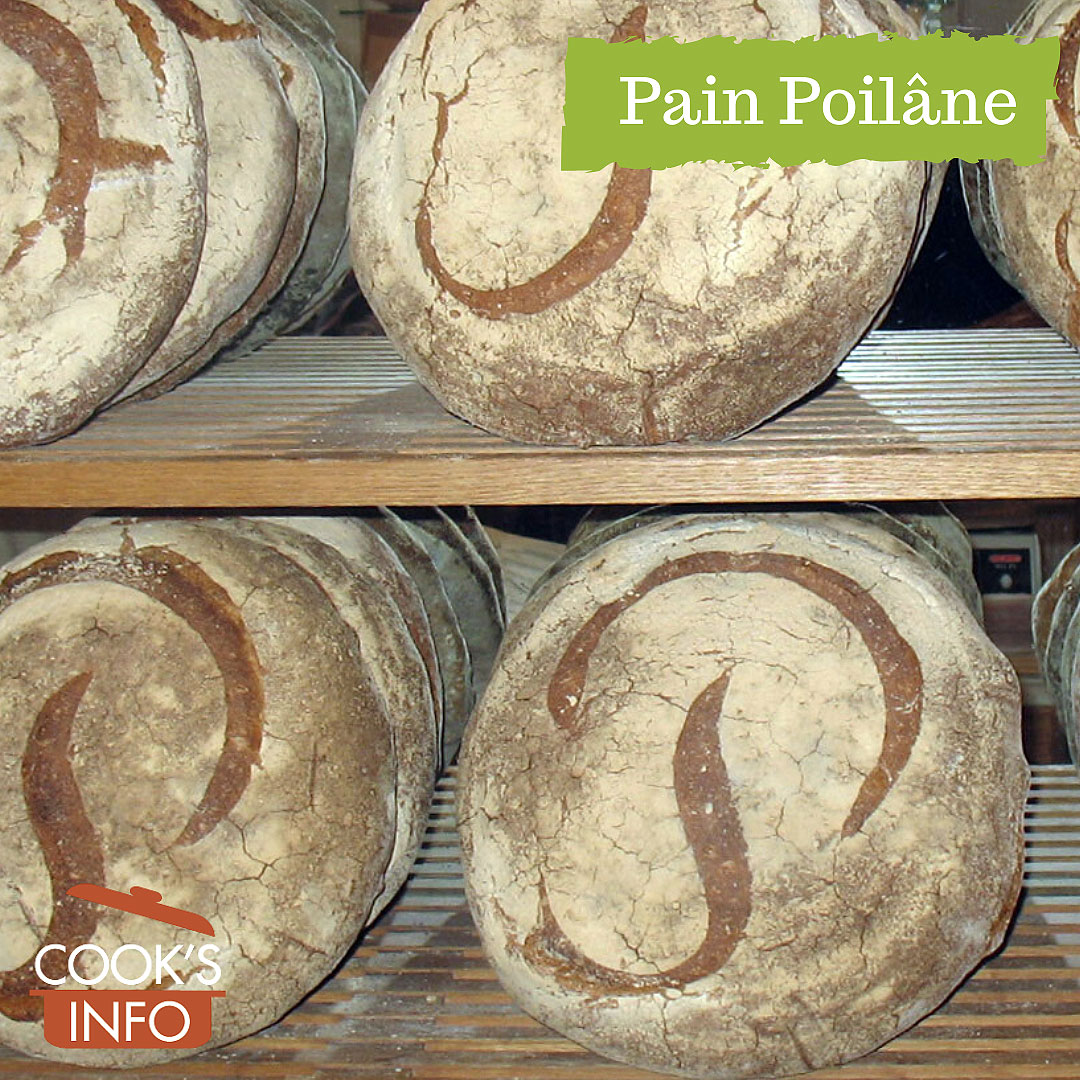 Pain Poilâne is a round loaf of sourdough bread made by the famous Poilâne bakery in Paris. Its actual name is “miche Poilâne.”

The signature bread made by the La société Poilâne (pronounced pwa-LEN) SA bakery, and therefore often referred to as “pain Poilâne”, is a country-style sourdough round loaf (“miche” in French), which weighs around 1.9 kilograms (about 4 lbs) — the weight varies by loaf as each is handmade. [1]This weight is often referred to as 2 kg by some writers, but Poilâne itself does seem to use the 1.9 kg number.

The bakery actually refers to this loaf as their “miche Poilâne”, because Poilâne makes other types of breads as well.

The miche Poilâne is round like half a somewhat flattened ball, with a thick, dark, tough crust, a dark, densely-textured crumb, and a slightly-tart taste that mellows as the loaf ages. The loaves are “baked until they are a deep brown, about an hour”, according to the bakery owner, Apollonia Poilâne. [2]Poilâne, Apollonia. The Secrets of the World-Famous Bread Bakery. New York: Houghton Mifflin. 2019. Page 41. [3]A Financial Times piece in 2011 reporting a six hour baking time can be confusing: “the Poilâne sourdough is baked for six hours.” That is the preparation time: forming, resting, rising, etc. The actual oven time is an hour. Whittle, Natalie. The Professionals: Apollonia Poilâne, baker. London: Financial Times. 26 November 2011.

The round miche has a swirling, cursive P slashed into its top (this is “docking”, to let large trapped air pockets escape during baking so that the loaf doesn’t explode.) The P shape seems to have been instituted around the year 2000. “Around the turn of the millennium, my father decided to return to an old tradition of signing loaves with the owner’s name to make our breads distinctive in a communal oven. Incidentally, the word for bread in French [“pain”] also starts with a P. It has been our hand carved signature ever since.” [4]Plummer, Todd. Paris’s Most Famous Bakery Spills the Secret to a Perfect Loaf. New York: Vogue Magazine. 28 September 2019.

Older photos and paintings of the bread show it docked with a square around the outside of the top, instead of the P.

“No yeast is used to make pain Poilâne, she explains; sourdough is made from flour, water, salt and starter, a piece of naturally leavened dough from the previous batch that kicks off the fermentation process. In this sense, sourdough is an ever-reproducing organism, and each loaf Poilâne makes is a direct descendant of the very first miche baked by Pierre back in the 1930s. It’s this special biochemistry that gives the bread its juicy, mouthwatering flavour. You have to use grey flour that contains plenty of wheat bran, says Apollonia, and the sea salt must be the kind from Guérande in Brittany, which has a distinctive flavour and thus can be used in smaller quantities ” [6]Rushton, Susie. Apollonia Poilâne. In: The Gentlewoman Magazine. London, England: Fantastic Woman Ltd. Issue n° 4, Autumn & Winter 2011 .

The flour is a wheat flour with an extraction rate of around 85%, leaving 15% wheat bran. [7]Some sources have said in the past that the bread contains spelt flour, and some even gave a figure of 30% but this appears to be incorrect. Perhaps the formulation changed over the years, or perhaps that is just a misunderstanding or speculation that crept in and got repeated.

“People often mistakenly think our sourdough is made with whole wheat because of its tan crumb. The color, however, comes from our flour, which includes about 15 percent of the wheat bran. In France, this is what we would call T80 flour in a classification system that’s based on ash content, which refers to the mineral composition of the wheat bran… But not all T80 flours, the kind we use, have the same flavor and characteristics. Our flour, which is entirely stone-milled for us from a blend of carefully selected wheat varieties that can vary from year to year, plays an important role in the unique flavor, texture, and color of our sourdough.”  [8]Poilâne, Apollonia, op. cit., page 40.

A loaf, wrapped in linen, will last up to seven days, “though Apollonia advises toasting it after the fifth day for optimum enjoyment.” [9]Rushton, Susie, op. cit.

Parts of a loaf can be purchased by weight: “they weigh it … you’re welcome to buy one slice of bread, or a whole loaf, sans problème.” [10]Lebovitz, David. Poilâne. Blog posting 1 December 2011. Accessed April 2020 at https://www.davidlebovitz.com/Poilâne-bakery-cuisine-de-bar-paris/ “The signature loaf — a large, round “Pain Poilâne” — sells by weight…” [11]Rourke, Mary. Lionel Poilâne, 57; French Baker Renowned for Round Loaves. Los Angeles: Los Angeles Times. 6 November 2002.

The water used in Poilâne bread

The water used by Poilâne in its breads is regular tap water.

In her 2019 book, Apollonia Poilâne wrote:

“Many bakers talk about mineral levels of water and what effects they can have on the final product. But what matters more to us is the amount of water. A wetter dough is less stiff, allowing the air bubbles in the dough to expand more. More hydrated sourdoughs have a dark crust like ours but, when sliced, reveal a very open crumb. Our dough is not overly hydrated, so a Poilâne miche has a more dense, even crumb…” [12]Poilâne, Apollonia, op. cit., page 41.

In an earlier interview, she expressed her feelings bluntly about the water: “And we use regular tap water because, contrary to what some people say, you don’t need special water. That’s bullshit,” she says, with the air of an expert used to correcting the silly assumptions of amateur cooks and picky customers. “By the time the loaf comes out of the oven, the water is boiled.” [13]Rushton, Susie, op. cit.

Interestingly, to make the 1.9 kg loaf, 2.3 kg of dough is weighed out — so approximately 400 g of weight is lost during the baking, which would likely largely be water leaving the loaf as steam. 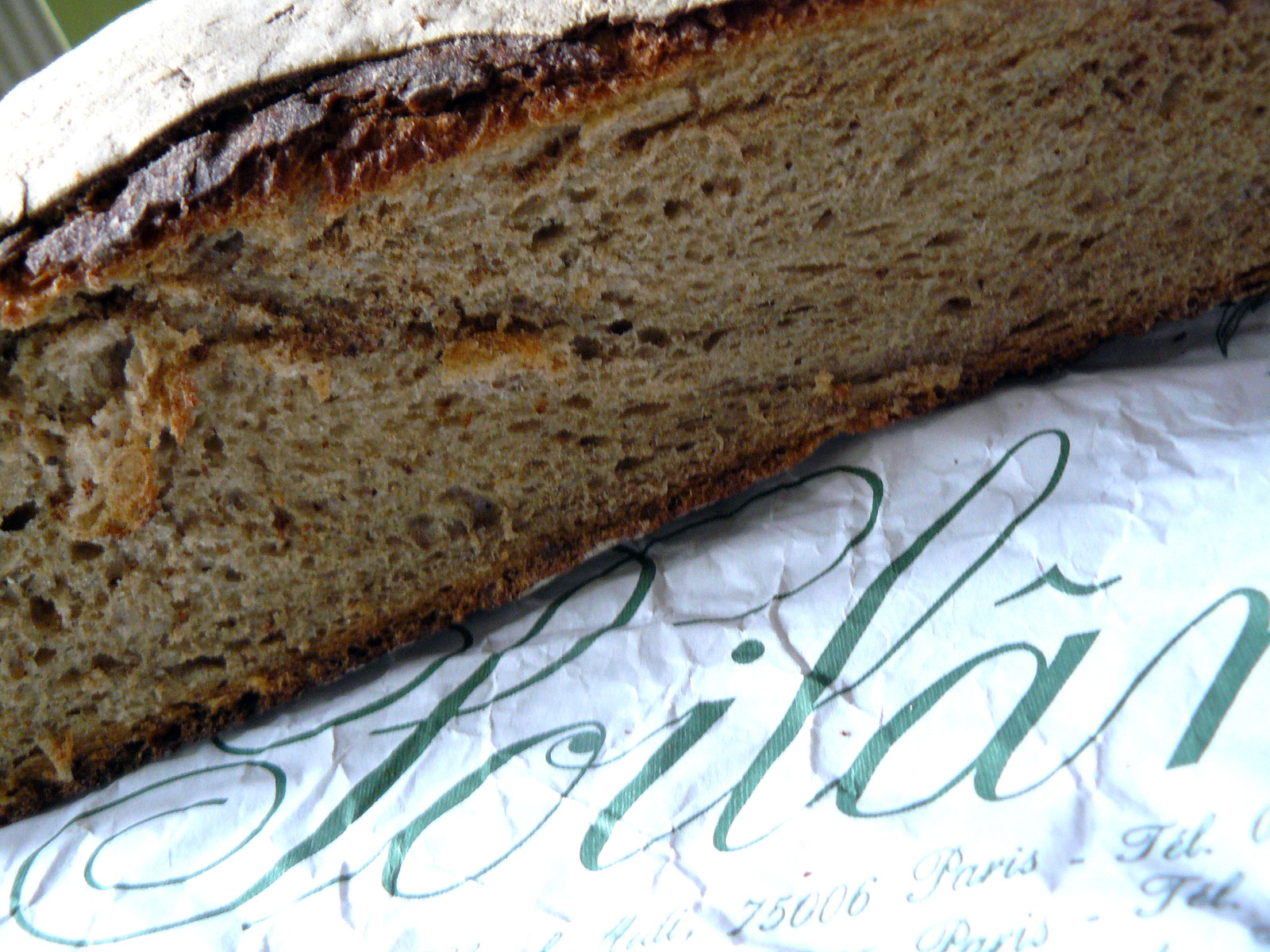 This web site generates income from affiliated links and ads at no cost to you to fund continued research · Information on this site is Copyright © 2022· Feel free to cite correctly, but copying whole pages for your website is content theft and will be DCMA'd.
Tagged With: French Breads, French Food