A pastry crust doesn’t have to be a short crust. It can be a flaky crust. It has, though several synonyms with slight nuances to them, such as pastry shell, pie crust or pie shell, that imply certain things to the home baker.

When the word “pie crust” is used, it’s generally taken to mean a short crust unless otherwise directed. A basic pastry crust for a pie requires only flour, water and a fat.

Pie crusts that are either baked a bit first before the rest of the pie’s ingredients are added, or baked completely, are called either “blind baked” or “pre-baked.” Both terms are equally absurd — when can a pie ever see? and don’t even think about how silly terms such as pre-baked, pre-cut, pre-sliced and pre-grated really are. But never mind, these are the terms we are stuck with to choose from. In any event, such crusts that are baked a bit first will soak up less moisture than ones that aren’t. You use fully-cooked crusts with fillings that don’t get cooked (such as lemon meringue and custard.)

Pie crust dough needs to be kept cool and handled very lightly. Don’t overmix. Over-handling will develop gluten in the flour and make the dough tough.

Pie crusts used to always be discarded. You only ate what was inside them. While this seems very odd, unless you have kids who try to get away with doing the same, it does make sense if you think about it. Ordinary people like us did not have the fine wheaten flour that we have now. What was used for flour may have been an inferior wheat or rye mixed with ground acorns, etc. The crust would probably have been hard and unappealing, not to mention scorched or covered in ashes from the hearths they were baked in.

“It takes a lot of dough to make the upper crust.” — Alfred E. Newman (fictional mascot of Mad magazine )

“SHORTENING: For those who persist in eating the tabooed pie a word of advice. Inasmuch as it is the crust that comes under the special condemnation of reformers, and the science of food explains why the combination of grease and starch, mixed in such proportions as are given in making “pie-crust” are sure to give an indigestible compound, which is not made less harmful by heating, we can understand the arguments used against such foods.

This charge applies, particularly to animal fats and to half-baked crust in which the half-cooked starch is incased [sic] in fat that resists the action of the saliva, preventing it from beginning the first steps in the inside conversion of starch, preparatory to its entering the stomach, where the fat still offers resistance to the gastric juice.

The use of vegetable fats, composed almost entirely of the highest refined vegetable oil, being used in much less proportion and differing greatly in its nature is found to give very different results when used by even delicate persons, who find that the dyspeptic bug-bear-pie is robbed of its terrors when made of wholesome materials, properly put together and properly cooked.” — Table and Kitchen Column. Trenton, New Jersey. The Trenton Times. Thursday, 23 January 1902. Page 6.

The following is advice from Pillsbury’s home economist, Mary Ellis Ames, in the 1930s:

“If the cookery column ‘class’ will please come to order, we’ll conduct a brief review on the subject of man’s favorite dessert — pie!

Use one-third as much shortening as flour, e.g. ⅔ cup shortening to two cups all-purpose flour.

Too little shortening; too much water; too much handling of the dough.

Use a good, solid, cold fat; as little water as possible; a very hot oven for baking. Handle the dough quickly.

Pastry that has been stored in a very cold place requires less handling and is more flaky when baked. Note: It may be necessary to let pastry stand at room temperature for a short time before rolling. Very cold dough tends to crack on the edges when rolled out.

Pastry can be stored only a few days in the refrigerator and must be wrapped in waxed paper or placed in a covered dish.

To “set” the crust. When pie fillings need long cooking, bake the pie in a hot oven for a few minutes (10 to 20), then reduce the heat to moderate for fruit fillings and to low for custard fillings.

First, be sure that the crust is “set” with a hot oven. Sogginess can also be avoided by brushing the unbaked bottom crust with unbeaten egg white and baking in a hot oven for about five minutes before adding the uncooked filling.

No. After rolling is started keep a right and a wrong side for pastry. Fit the dough “right” side up in the pie pan.

When the top crust is placed on top of the moistened undercrust and pressed together, it forms a seal to hold the juices.” 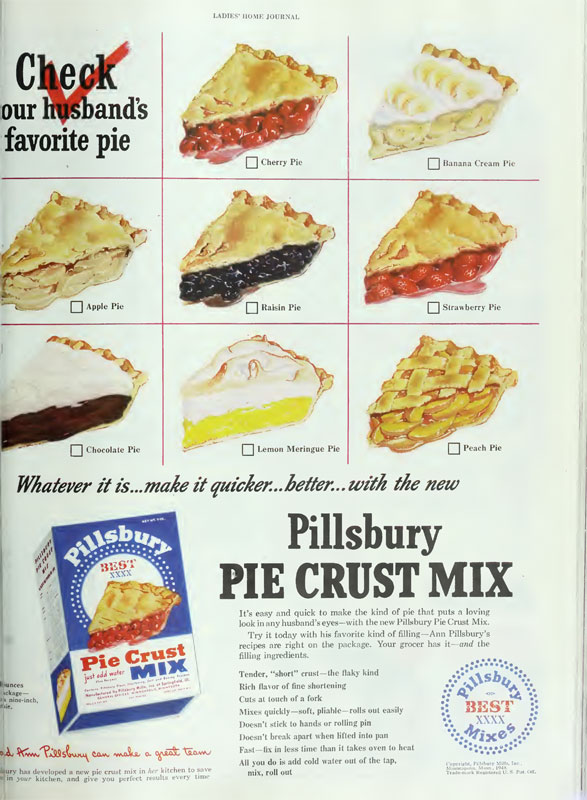 In English, pastry used to be called “paste”, which derived from the French word “pâte”

As recently as the 1880s, American cookbook writers such as Mrs Porter (New Southern Cookery Book, 1879) referred to pastry as “paste”.

This web site generates income from affiliated links and ads at no cost to you to fund continued research · Information on this site is Copyright © 2023· Feel free to cite correctly, but copying whole pages for your website is content theft and will be DCMA'd.
Tagged With: Baking, Pies & Tarts