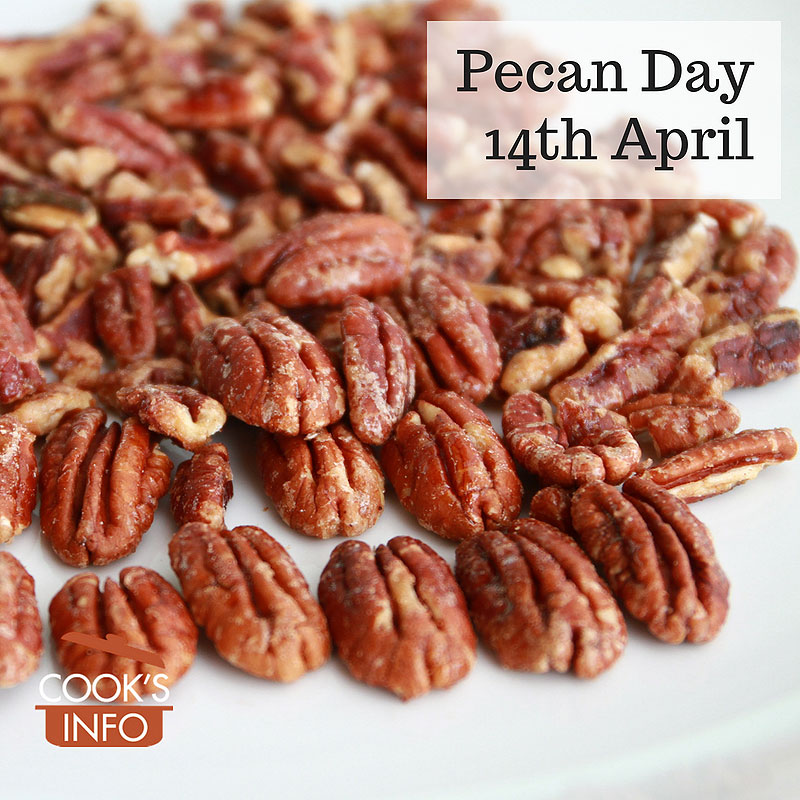 The 14th of April is the day to treat yourself to something with pecans in it.

That being said, we’re not at all certain why it’s Pecan Day.

Some instead plump for Pecan Day being celebrated on 25 March, that being the anniversary when George Washington planted pecan trees at Mount Vernon in 1775, a gift from Thomas Jefferson.

The problem with the Washington date

The sticking point with the Washington date is the planting didn’t happen on this day.

Washington’s diaries were quite detailed, particularly when it came to his gardens. In his dairies, Washington referred to pecans variously as “Missisippi Nuts” [yes, his spelling], “Illinois Nuts”, and “Pekans.”

“March 11th. At the head of the Octagon — left hand side — in the first Row, next the gravel walk 5 Peach Kernals fine sort from Philadelphia. In the next 4 Rows to these 130 Peaches also of a fine kind from Phila. — same as Colo. Fairfax white Peach. Row next these 25 Missisippi Nuts — something like the Pignut — but longer, thiner shelld & fuller of Meat.”

He was not home, however, at all from the 15th to the 30th of the month inclusive (and on the 25th, the day in question, he was in fact staying at the home of Anne Harrison Randolph, part of the same Randolph clan in Virginia as Mary Randolph, author of The Virginia Housewife cookbook (though Mary was only 13 at the time.) Here’s the record:

14. At home all day. Doctr. Craik came in the Afternn. Cleveland still here.
15. Set of for Richmond. Dind in Colchester with Mr. Wagener lodgd at Colo. Blackburns.
16. Went to Dumfries to review the Independant Company there. Dind & lodged with Mr. Leitch. Spent the Evg. at an Entertt. at Grahams.
17. Reachd Fredericksburg first dining at Mr. James Hunters–detaind by Wind.
18. Clear and pleasant–in Fredericksburg all day.
19. Dined at Roys at the Bolling green and lodged at Hanovr. Court House.
20. Reach’d Richmond abt. 11 Oclock. Dind at Mr. Richd. Adam’s. Went to Col. Archy Carys abt. 7 Miles in the Aftern.
21. Dind at Cooleys Tavern in Richmd. & returnd to Colo. Carys.
22. Dined at Galts Tavern & lodgd at a House of his providing.
23. Dined at Mr. Patrick Cootes & lodgd where I had done the Night before.
24. Dined at Gaits & spent the Evening & lodgd at Mr. Saml. Duvals.
25. Returnd to the Convention in Richmond. Dined at Galts & went to Mrs. Randolphs of Wilton.
26. Stay’d at Wilton all day.
27. Returnd to Richmond. Dined at Mr. Richd. Adam’s.
28. Left Richmond. Dined at Hanover C[our]t Ho[use] & Lodged at Roys at the Boiling Green.
29. Got to Fredericksburg abt. 11 Oclock. Dined at Colo. Lewis’s & spent the Evening at Weedons.
30. At Fredericksburg all day. Dined at Colo. Lewis’s.
31. Set of from thence. Dined at Dumfries & reachd home about Sun Set.

But nothing on the 25th of March.

In 1995, newspapers were unanimously reporting that Pecan Day / National Pecan day was on the 25th of March. Here’s one columnist: 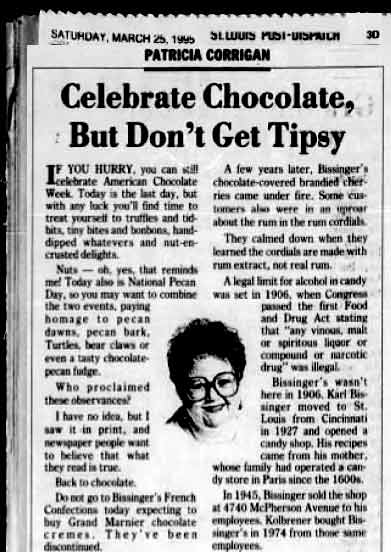 This unanimity continued till about 2011. By 2011, you have most newspapers still celebrating it in March, and the appearance of a few starting to cite a month later in April. There’s no explanation for it. The columnist below implies the April date came about from some Internet web sites who may have just copied an “error” that one of them made, as the websites admitted to not knowing why it was on a particular date in April. Or perhaps someone thought it made sense to move it to being in April, as April had, somewhere along the line, been proclaimed “National Pecan Month”.

In any event, 2011 is the first mention CooksInfo has seen of an April date, and from then on, the April date slowly took over:

“It’s just nutty — fall is the time for a pecan harvest, but National Pecan Day falls on April 14. Several websites admit to not knowing why, and none we found tried to explain it. If you can’t make a pecan dish on National Pecan Day, don’t worry. April is National Pecan Month — and any day is a good day for a pecan recipe in Texas. The pecan tree, the only nut tree native to North America, has been the Texas state tree since an act of the Texas Legislature in 1919. Gov. James Hogg favored the tree so much he requested one be planted at his grave site.” — Stewart, Charlotte. Delicious ways to celebrate National Pecan Day. Longview, Texas: Longview-News Journal. Wednesday, 13 April 2011. Page B1, col. 2