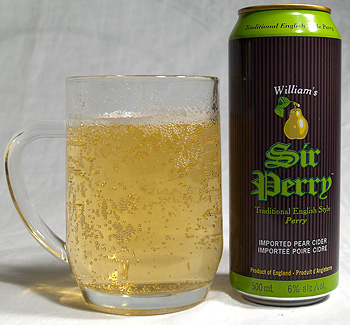 Perry is an alcoholic beverage very similar to apple cider, but made from pears, particularly the variety of pears actually called “Perry Pears.” It is made in the UK and to a small extent in America as well.

To make Perry, the pears are first picked. They are never, however, used straight off the tree: they are allowed to stand between 2 and 7 days, depending on the type of pear. The pears are then crushed. The crushed pear pulp is called a “pomace”, just as it is for apple cider. Unlike pomace for apple cider apple, though, which is then pressed right away, pomace for Perry is allowed to stand for a day before pressing to extract the juice from it. The juice is allowed to ferment for a few weeks, and when fermented, corked in kegs and allowed to age for up to 6 months. After that it is filtered.

When finished, Perry is flat, not sparkling, and somewhat cloudy, like a “real ale.”

Perry can be made from a blend of different pears or from a single pear (if only a single pear is being used, usually a higher-tanin variety is chosen.)

Following are the types of pears used to make Perry from:

Sparkling Perry sold in stores is usually called “Pomagne”, made by Bulmers. It is a low-alcohol sparkling wine with pear flavouring. Often drunk by giggling teenagers at school dances.