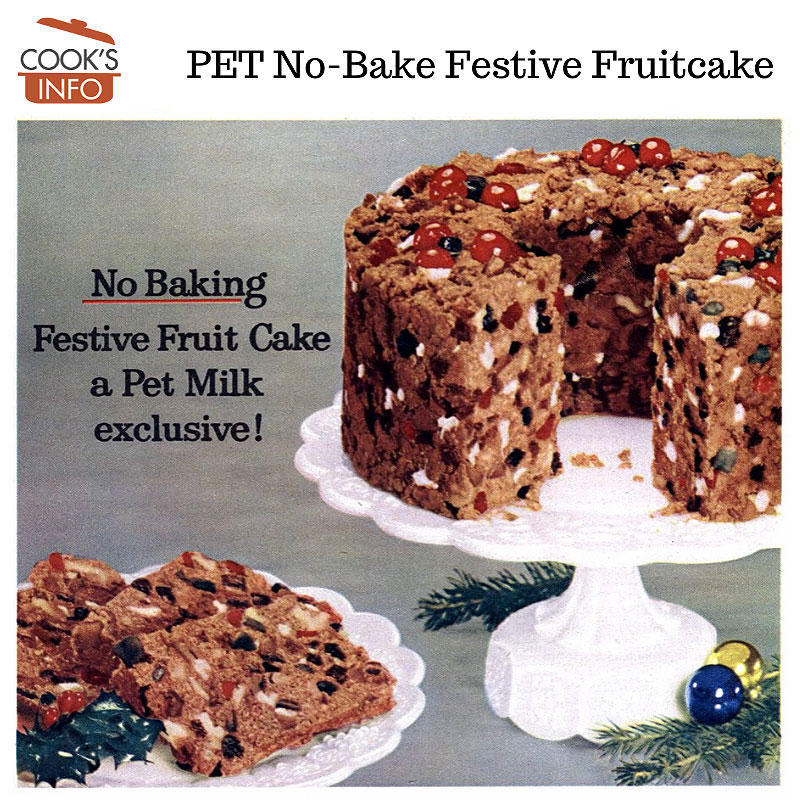 The PET Festive Fruitcake gained its place as a beloved, if quirky, part of the American Christmas cooking pantheon in the second half of the 1900s.

The goal of the recipe was to promote the use of PET Evaporated Milk as an ingredient in holiday cooking.

The projected yield of the recipe (given in pounds weight) varied over the years as the recipe versions varied.

Earliest appearance of the recipe

The first print appearance of the recipe that CooksInfo is aware of is in October 1953, in Texas. 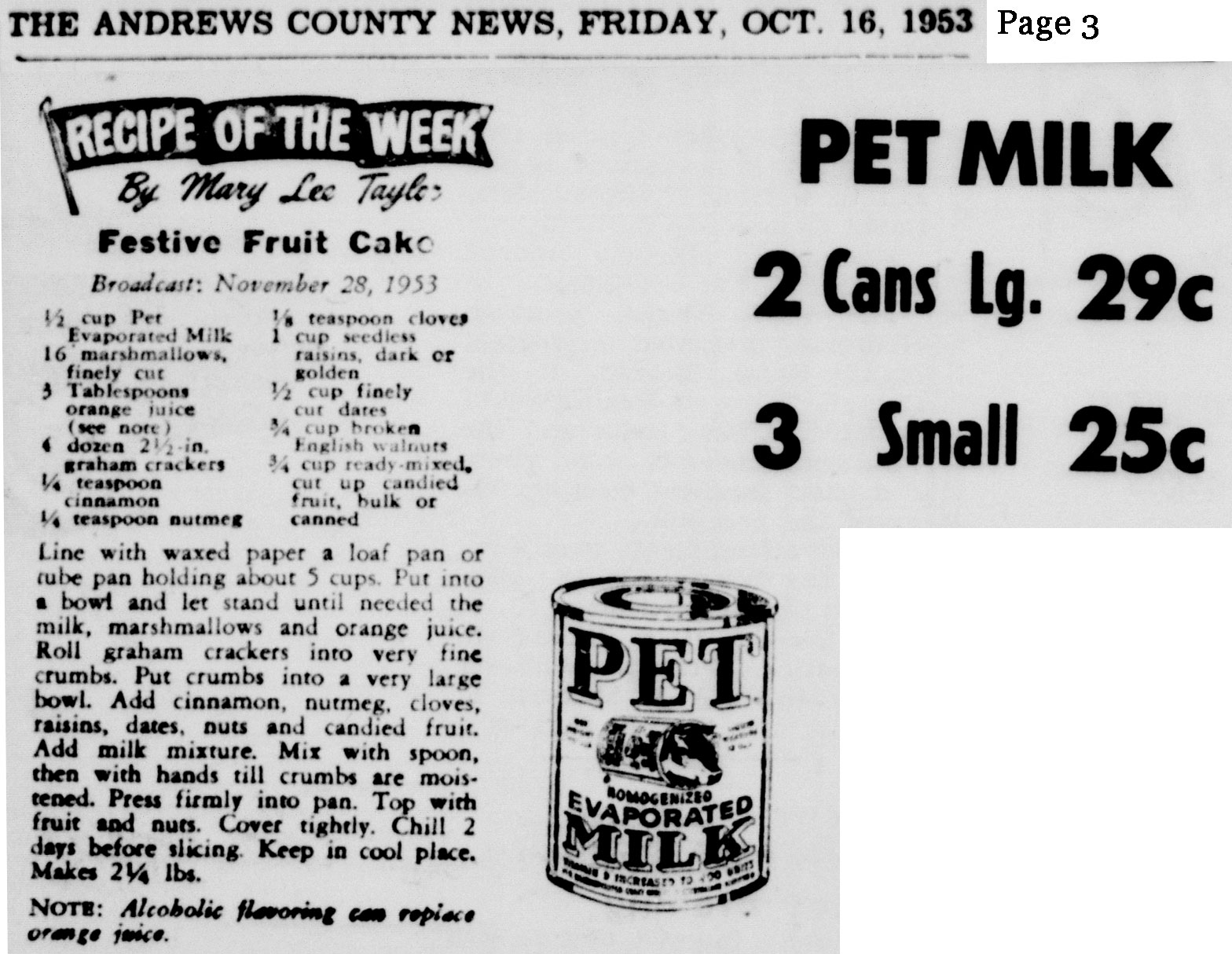 The recipe would soon appear in magazines as full-page, glorious-colour spreads. Then, it was carried for years after at American holiday time on the side of tins of PET evaporated milk.

The recipe became wildly popular. Many grocery stores based entire newspaper ads on the ingredients for it.

Many American families now count it as part of their holiday “traditions.”

A similar recipe, just called “Festive Fruitcake”, appeared on page 7 of the Modesto Bee on Saturday, 18 December 1954, calling for just “evaporated milk” instead of “PET” milk. It advised that “Alcoholic flavoring can replace the orange juice if desired.”

In 1956, National Brands Stores ran ads in local papers picking up on the popularity of the recipe.

In subsequent years, other stores such as IGA in Santa Fe, New Mexico in 1958 would pick up the same idea. 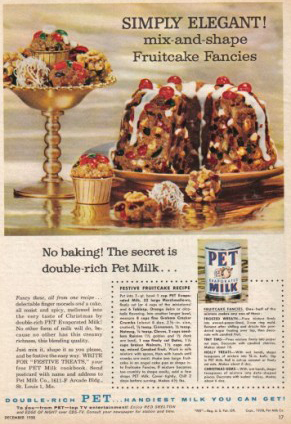 In November 1958, Family Weekly Magazine ran a 8 x 11 inch ad showing showed a full-colour picture of all the different dessert items that could be made from the one recipe.

“Fancy these, all from one recipe… delectable finger morsels and a frosted cake, all moist and spicy, mellowed into the very taste of Christmas by double-rich PET Evaporated Milk! No other form of milk will do, because no other has this creamy richness, this special blending quality. Just mix it, shape it as you please, and be festive the easy way. WRITE NOW FOR “FESTIVE TREATS,” your free PET Milk cookbook. Send postcard with name and address to Pet Milk Company, 1619-F Arcade Building, St. Louis 1, Mo.

FRUITCAKE FANCIES. One-half of the mixture makes any one of these:

To you—from PET—top TV entertainment! Enjoy RED SKELTON and EDGE OF NIGHT over CBS-TV… consult your newspaper for station and time.

“NO-BAKE FESTIVE FRUITCAKE RICH, DARK AND DELICIOUS with PET . . . the milk with twice the country cream in every drop . . . Happy holiday tradition, made famous by PET Milk! This fruitcake is moist and mellow, heavy with fruits and juicy nutmeats. Takes no long hours of baking. Just mix, press into a mold and chill. Double-rich PET Evaporated Milk cream blends all the flavors, gives the cake its firm, rich texture. Thin milk just won’t do! Only PET makes this wonderfully elegant cake . . . a deliciously festive touch for any holiday occasion.

CooksInfo.com’s last sighting to date of the recipe in the press is on 13 Dec 1961 in the Manitowoc Herald Times of Manitowoc, Wisconsin, page 16. 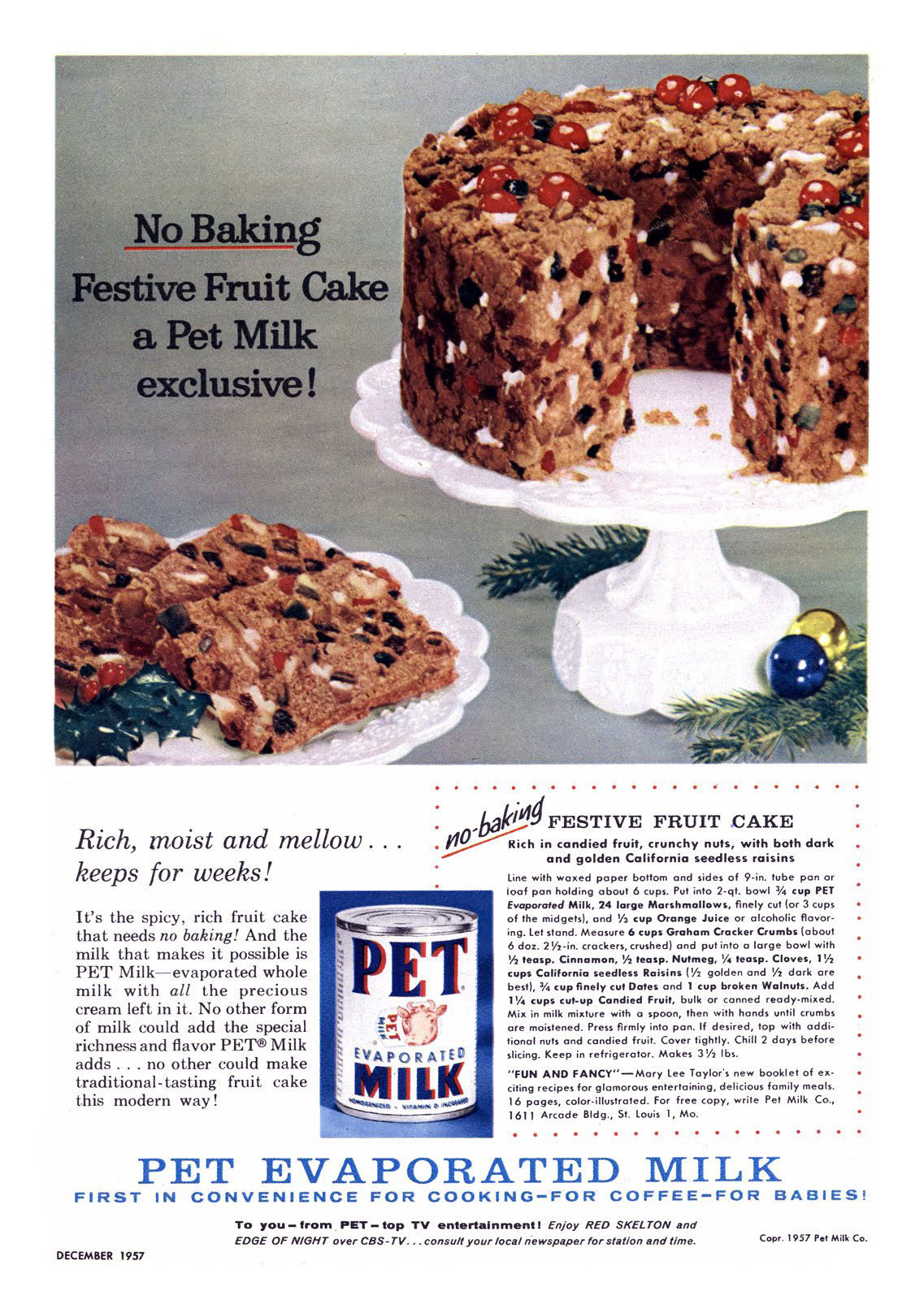 This web site generates income from affiliated links and ads at no cost to you to fund continued research · Information on this site is Copyright © 2023· Feel free to cite correctly, but copying whole pages for your website is content theft and will be DCMA'd.
Tagged With: American Food, Christmas Cakes