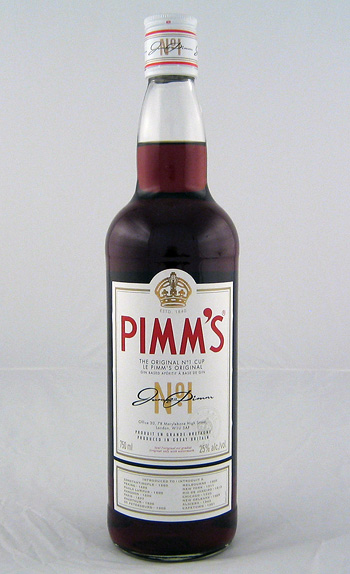 Pimm’s® is an alcholic drink mix based on herbs and quinine. The base alcohol in it can be gin, vodka or brandy, depending on the version.

Pimm’s® Number 1, based on gin, is the most popular. It is 25% alcohol — its alcohol content used to be higher. Because of this, some people like to add a splash of gin to compensate.

The recipe is secret. The company says it is still known only by six people. Some sources assert that kegs of curaçao can be seen at the factory.

Pimms is classically mixed with what the British call “lemonade” to make a drink that is a bit tart, a bit bitter, served in a highball or Collins glass.

The lemonade would be disappointing to any North American expecting a jug of real, homemade lemonade with a few springs of mint in it. It’s actually just a lemon-flavoured carbonated soft drink, often just clear, not even yellow, and, it is absolutely the exact right thing to mix Pimms with. Well-known brands are Schweppes and R Whites Lemonade; grocery stores also sell their own brands. The closest you can get to it in North America is Sprite, though that has lime in it.

Some toffs prefer to use champagne instead of any kind of lemonade at all.

The classic recipe for mixing Pimms Number 1 up calls for sprigs of fresh mint, along with slices of apple, cucumber, lime, orange and ice cubes. Originally, borage leaves were called for instead of the cucumber. The result is called a Pimms Cup.

The height of Pimm’s season is the summer, particularly during Wimbledon, and at Ascot each year, 70,000 glasses are drunk.

Sales for Pimm’s look good these days — they went up 400% during the hot summer in England of 2003, accompanied by promotion to broader segments of the market.

Pimm’s can be hard to find in some parts of America.

Use 1 part Pimms to 2 parts lemonade in mixing it up. Each bottle will provide for 20 to 25 glasses, depending on the size of the glasses of course.

Substitute for Pimm’s: 1 part gin, 1 part red vermouth, 1/2 part curaçao (clear or orange coloured, particularly Bols.) [2] The gin should be 40% alcohol strength. Mix the alcohols up about an hour in advance before using to allow flavours to marry and settle, then proceed to use.

Substitute for the lemonade: Make a sugar syrup from 1/2 cup (4 oz / 115g) of sugar and 1 cup (8 oz / 250ml) of water. Bring these to boil in a saucepan, then reduce the heat straightaway to a low simmer, and simmer just until sugar has dissolved and it has thickened a tidge. Let stand off the stove until it has completely cooled. Then, mix in 5 cups (2 pints / 1 1/4 litres) of cold water, and the juice from 4 lemons. Makes enough lemonade for 8 to 10 mixed Pimm’s drinks.

Pimm’s was invented by a James Pimm.

In 1823, he opened an Oyster Bar in the City of London. He developed a gin drink to server there, flavoured with fruit juices and liqueurs, and bitters. He created as an aid to digestion, back in the days when bitters where thought to be helpful. It was popular, so he rounded up some investors and began making it commercially.

It was served straight up at first. By the 1920s, it was known to Americans.

There were, at various times, six different kinds, varying by what they were based on. The original is Number 1.

Many of the numbers were introduced after World War II.

The range was cut back in the 1970s. At present (2006) only Pimms numbers 1 and 6 are made. The wife of one of the company directors reputedly pleaded for number 6 to be preserved.

Number 3 is made for the Christmas market, flavoured with orange peel and spices.

In April 2009, Sainsbury’s in the UK introduced a Pimm’s knock-off called “Pitcher’s”, over which the owners of Pimm’s at the time, the Diageo conglomerate, launched legal proceedings. [1]

This web site generates income from affiliated links and ads at no cost to you to fund continued research · Information on this site is Copyright © 2021· Feel free to cite correctly, but copying whole pages for your website is content theft and will be DCMA'd.
Tagged With: British Food, English Food