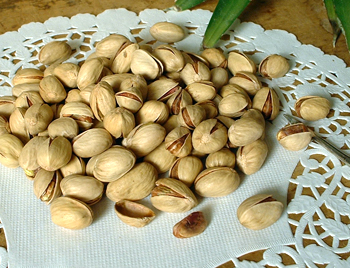 Pistachio nuts grow on a tree called the “pistacia.” Pistacia trees need to be at least 7 years old to really start producing, but once they get going, trees have been known to last for at least two centuries. There are male and female pistacia trees. You need to have both planted in close proximity to each other, as they cross-pollinate via the wind, and no pollination, no nuts. The trees grow 20 to 30 feet (6 to 9 metres) tall.

When the trees reach the age of 5 years, they will start producing nuts. They reach full production capacity at around 15 years old, and will keep on producing for about 50 years after that.

When the nuts are ripe, the pinkish-ivory furry shells split open lengthwise, signalling that they are ready for harvesting. The nuts inside are a bright, soft green, covered by a thin rose-coloured skin. They are harvested, and then hulled, dried and roasted.

If unprocessed, the fresh Pistachio nuts inside are sweet and juicy. They can be used at that stage, fresh, without the processing. They can be puréed into a pesto for savoury dishes, or the purée can be used in desserts such as ice creams or custards.

The shells of dried Pistachio nuts aren’t naturally red; they are dyed red (see history section below.) Most California Pistachios are sold undyed, to distinguish them from foreign imports, but some are sold dyed because many consumers still think they should be red. Connoisseurs prefer Pistachios from Turkey or Iran, saying that the California ones, though bigger, are bland and lack the pungency that Pistachios should have. Iranian Pistachios, though, are very hard to come by in America, even though Iran has 4 times as many Pistachio groves as does California: a tariff of 300% on Iranian Pistachios, imposed in 1986, is still in effect (as of 2004), and it is likely the California Pistachio Commission is in no hurry to see that tariff go down.

If you are going to eat Pistachios as a snack food, they come already shelled, salted in vacuum containers for just that purpose, but because they are so addictive, you may want to get unshelled ones instead, so that having to shell them will slow you down. 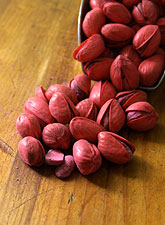 If any unshelled Pistachios are not split open, discard them — they won’t be mature enough to eat.

After you have finished shelling them, you need to remove the thin rose-coloured skin over the nut. Blanch the nuts for a minute or two in boiling water, drain and let them cool a bit. The skins will rub off easily while the nuts are still warm.

For an elegant, no-work “dessert”, try putting out “afters” on the table of Port, Stilton and a bowl of unshelled Pistachio nuts. For some reason, the combination is amazing. “Unshelled” not only look better, but with the extra work of shelling them, your poor guests won’t put on ten pounds just from the nuts.

Pistachios need to be stored in a sealed container, as moisture in the air will make them go soft. Store in the refrigerator or freezer for up to a year.

Pistachios are native to the Middle East. During the Roman Empire, Greece and Sicily were big production centres.

There are two stories as to why they are dyed red. Once is that because of how they are harvested. Whacked off the trees with sticks, the shells can get blotched or stained, and the red dye gives them a more even, pleasant colour to allay consumer concerns about the blotchiness on the shells. The other story is that when Pistachios started to become a mass-market item in America in the 1930s, street vendors hit upon the idea of dyeing them red to distinguish them from other nuts (presumably they weren’t sold shelled, because surely the green nut would have been a giveaway that this wasn’t a peanut.)

California began growing Pistachio trees in the late 1960s, with the first crop hitting the market in 1976.